Home » Tuning and Technology » Where the Hell Are the Robotaxis We Were Promised?

Robotaxi this, autonomous that—the promise of revolutionizing the ride-hailing industry with self-driving cars has been shouted from the rooftops for years. And yes, before you say it, one of the loudest voices has been Tesla CEO Elon Musk, but I want to be clear that this story isn’t really about him. What we’re talking about today is a much bigger question. Entering 2022, there are just a few autonomous ride service pilot programs roaming the streets of America—undeniable progress, but not exactly a paradigm shift just yet—and plenty of unfulfilled promises to go around (Okay, that was Musk, too). So where are all the robotaxis, dammit?

Like the task of designing self-driving hardware and software suites that can stand up to the myriad demands of taxi service, the answer is complicated. In one sense, they’re already here. You can fly to Phoenix tomorrow and hail a self-driving Chrysler Pacifica through Waymo with no safety driver on board, and GM’s Cruise subsidiary soft-launched its service in San Francisco last month. These are real advances that would’ve seemed outlandish a decade ago. But scaling an autonomous ride-hailing program is more than a programming challenge, which is hard enough on its own—it’s a logistical one, a mechanical one, and an economic one as well. Robotaxis for the masses, it seems, will have to wait until a company can nail all that at once, which in all likelihood, is still years away from happening.

Still, it’s a good time to take a snapshot of where we’re at right now to assess where we need to go tomorrow. Let’s take a deep dive into the state of the self-driving taxi industry today.

The Cars Have Eyes

The first task of any self-driving startup is to give a vehicle the gift of sight. It’s important to start by recapping what that means right now in 2022.

Autonomous vehicle companies are quite good at this, actually, and achieve this once-impossible feat by outfitting vehicles with vast sensor suites to map the area surrounding a car into actionable three-dimensional planes. The sensors can use lasers, radar, or camera vision not just to identify objects around them, but also to plot where the objects reside in relation to the vehicle and the velocity at which the objects are traveling. 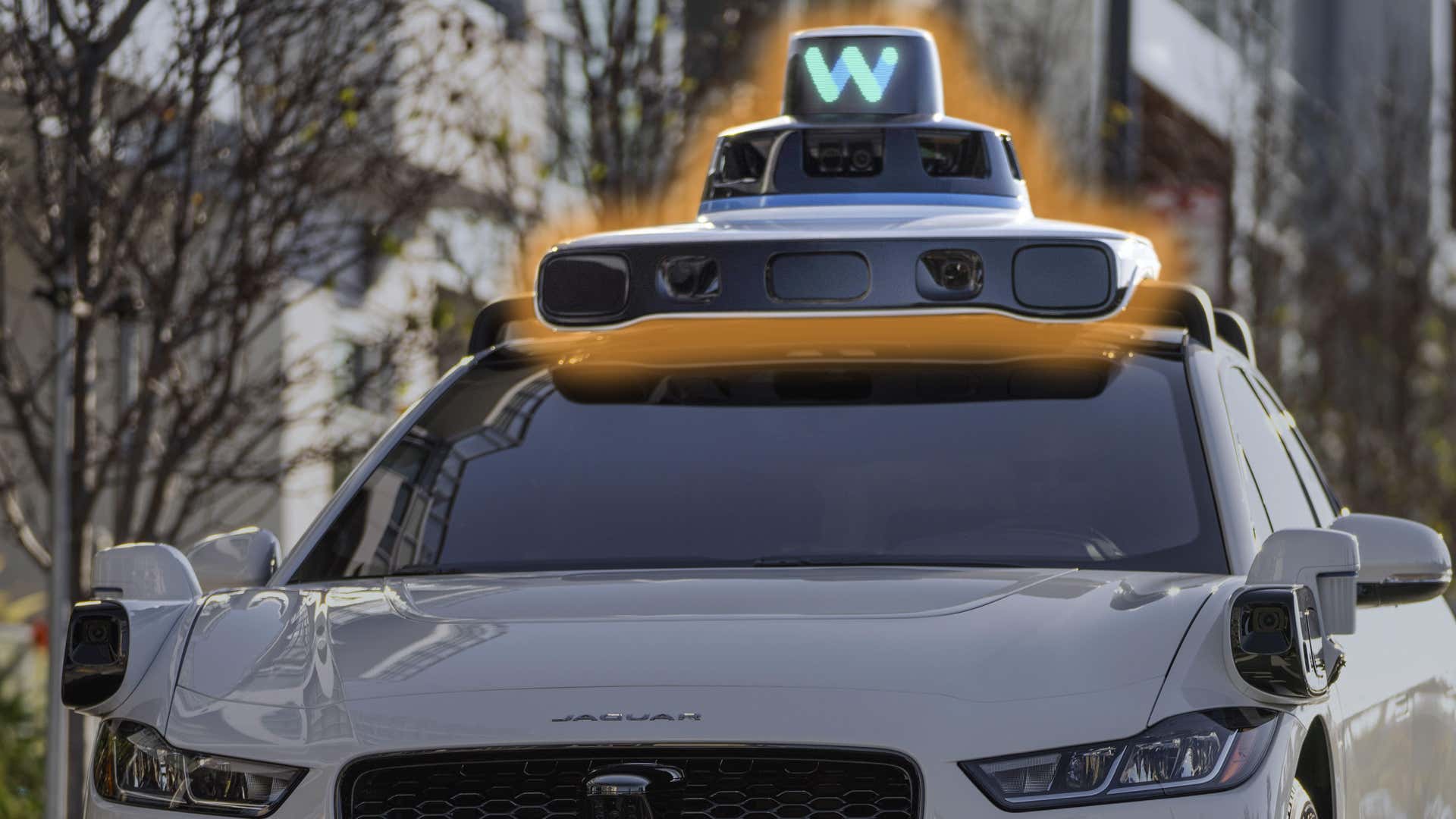 What a cool hat.

If you’ve ever seen a car sporting the name of outfits like Waymo, Cruise, or Motional, you’ve undoubtedly noticed the large packs of sensors atop the vehicle’s roof. They look kind of like party hats, except one meant for a Dalek.

These sensor packs (along with others mounted elsewhere on the vehicle) are made up of different individual sensors of varying types that I’ll detail below, all of which combine to give the vehicle the ability to see the world using different modalities. By stacking multiple sensor types on top of one another, companies help to build a vehicle capable of driving itself in different scenarios with limited visibility, like inclement weather or at night. This is almost like you or I using our different senses—touch, sight, and hearing—to get a better picture of our surroundings.

A modern sensor stack in an autonomous test vehicle might use lidar, radar, and multiple cameras, each of which excels in one area and could use help in another: 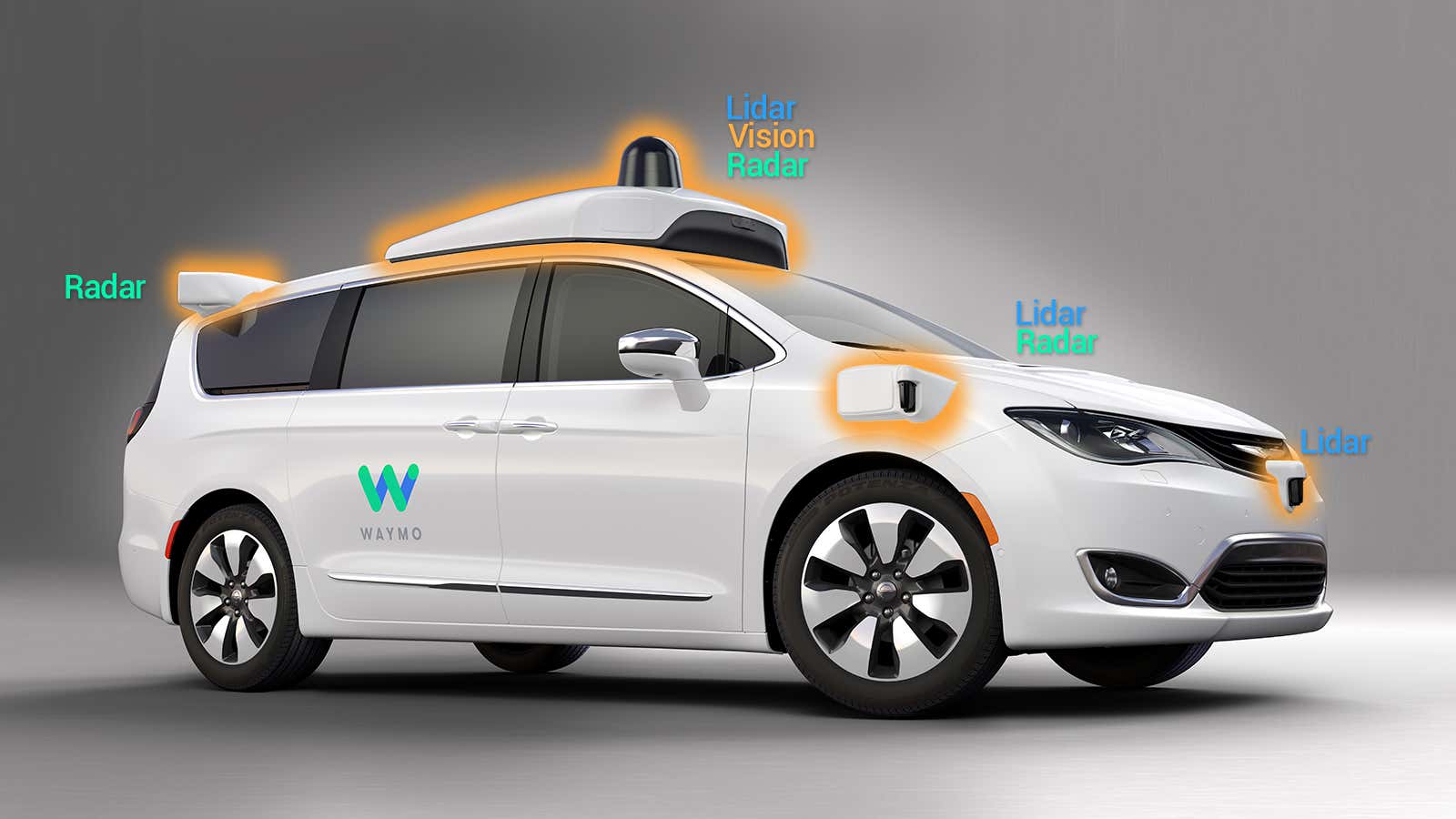 Most companies pursuing the dream of driverless taxis simply slap these sensors over top of an existing vehicle. Each Pacifica is equipped with five lidar sensors: a 360-degree sensor on the top, as well as four complimenting sensors at the front, rear, and at each side of the minivan. Radar is mounted at the top, rear, and on both front fenders. Lastly, a vision system sits atop the Pacifica to complete the sensor stack. The upcoming fifth-generation sensor stack found on Waymo’s fleet of Jaguar I-Pace vehicles improves upon this by adding additional perimeter vision systems and high-definition radar.

A commercial application like Waymo doesn’t need to hide its sensors cleanly into its body lines like a car that could end up in a consumer’s driveway, so adding a large 360-degree lidar sensor atop the roof isn’t really an eyesore that these companies have to worry about. Passenger cars are a different story.

Tesla is a prime example of this, as its vehicles are designed with a more streamlined styling and for greater efficiency in the name of total driving range. Despite the styling and sensor differences between commercial solutions and a Tesla, the Texas-based electric automaker plans to be the first which offers a passenger car that can pull double duty as a driverless taxi. Musk touts that this will help make passive income for vehicle owners, potentially enabling an average person to operate a fleet of Model 3s that just generate income. In fact, that’s one of the reasons that Tesla’s Full Self-Driving software suite costs $12,000 on top of the price of the vehicle—even though Tesla missed its timeline on unleashing a half-million robotaxis by the end of 2020.

If a robotaxi’s sensors are its eyes and ears, the software mapping everything together is the brain. That is where the magic happens—where ones and zeros, cartesian coordinates, and images are fused into usable information that the vehicle’s underlying software can act upon. Data from those sensors are used to determine how to navigate roadways like a human would, by interpreting lane markings, speed limits, obstacles, and whatever else the road has to throw at it. Unlike a human, however, software doesn’t suffer from the curse of selective attention, meaning the decision-making process is solely focused on the vehicle’s entire surroundings, so as long as it is programmed to do so.

Now, I mentioned that an AV’s sensor stack is made up of multiple modalities. That’s because each sensor has individual strengths and weaknesses which can be bolstered by the strength of another sensor. Think of it like rock-paper-scissors, except the only winner is the car or pedestrian that doesn’t get clobbered thanks to some redundancy.