Home » Racing » Why 2022 Is a Pivotal Year for Pierre Gasly, Yuki Tsunoda at AlphaTauri F1

AlphaTauri’s AT03, or at least some slick renderings, have been presented to the world, but what could be in store for the team in 2022?

Reasons to Be Optimistic

The DNA of this AlphaTauri team stretches back to 1985. It entered as minnow Minardi, before being acquired by Red Bull in 2005, transitioning into junior team Toro Rosso, eventually rebranding under its apparel offshoot in 2020. It has never been in such a strong position both on- and off-track.

Last year, the team matched its best-ever position of sixth in the F1 Constructors’ Standings, and, while it lacked the high point of 2020’s win (Pierre Gasley at Monza), it broke its points record with 142 points scored. On occasion, AlphaTauri had the third-quickest package and could legitimately outclass distinguished manufacturers such as Ferrari and McLaren.

It has a good team structure in place, with design facilities at Faenza (Italy) and Bicester (U.K.), under the guidance of team boss Franz Tost and chief designer Jody Egginton. Decision to continue using Honda’s power units under the Red Bull Powertrains lable, rather than have to become a lower priority for another manufacturer, is also a boon. The regulatory reset also means it will be using current-spec Red Bull parts (gearbox, rear suspension, hydraulics) rather than year-old versions.

In veteran driver Gasly, AlphaTauri has a gem. With 86 starts now under his belt, Gasly, 26, has the ideal mixture of youth and experience. Gasly knows AlphaTauri and AlphaTauri knows Gasly, and that long-term stability will help, with their partnership having first started in 2017.

Gasly was superb across one-lap in 2021, regularly contending for the first three rows of the grid, and wound up ninth overall in the championship, trailing only the drivers from Red Bull, Mercedes, Ferrari and McLaren.

Tsunoda, 21, has the advantage in 2022 of understanding the intensity and demands of a Formula 1 season—something he freely admits he underestimated in 2021. After a difficult start and loss of confidence, he rebounded, and his end-of-2021 form was more encouraging. He finished with three consecutive Q3 results, and started a standout fourth in the Abu Dhabi race. Tost holds Tsunoda in high esteem and believes expectations were raised unrealistically high early in 2021.

The drivers also get on well, creating almost a big brother/little brother relationship.

Reasons to Be Pessimistic

Long gone are the days when scoring points is an achievement for AlphaTauri, but taking the next step is a colossal challenge.

Even with the pace of its 2021 car, it allowed too many big chances to slip away, sometimes through strategic missteps, or mere race weaknesses such as in Qatar, where a front-row start for Gasly was converted into a disappointing 11th-place finish.

For years, Tost has set his sights on fifth in the standings but, while AlphaTauri has improved, it has peaked at sixth. To take the next step, it has to dislodge one of the bigger five teams (or hope one slips up) while also keeping marques such as Aston Martin behind. 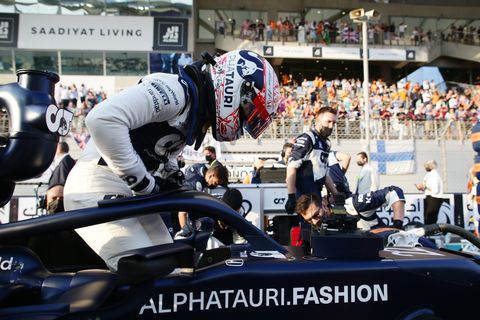 AlphaTauri’s working relationship with Red Bull gives it advantages, but also means it is at the beck and call of its owner. That reliance could prove to be a drawback so early into a regulatory reset. AlphaTauri remains one of F1’s smallest teams and boss Tost does not expect the cost cap to be fully influential in the sport until 2023.

Gasly has been largely excellent since his mid-2019 relegation to Red Bull’s junior team but what more does he have to do to get back to the Red Bull seat? If nothing he achieved through 2020 or 2021 convinced Red Bull that he warranted a second chance at the big prize, will he be able to do anything in 2022 that will?

Gasly is stuck in a Catch-22. If a chance does arise for a promotion to one of the sports biger teams (Mercededs, Red Bull, Ferrari, McLaren) in 2023, it will presumably be outside of Red Bull’s umbrella. Gasly must ensure he still has the momentum that could easily subside if AlphaTauri plateaus. He is hardly old, but the next generation will soon be arriving, and he risks being stranded in the midfield wilderness.

As for Tsunoda, promise is promise but it remains so until turned into reality. Red Bull is not known for patience with its junior drivers and typically makes a firm judgement after a couple of years, making it sink-or-swim time for Tsunoda.

Plenty of young Red Bull drivers have shown flashes of potential, not unlike Tsunoda, but not converted it into consistent and tangible results. Red Bull has this year placed five junior drivers in Formula 2, the category directly below Formula 1, and realistically four of them have the potential to make the grade in 2023 if they deliver. That will raise the pressure on Tsunoda.

Higher than seventh would be a good result for a team entrenched in the midfield; Gasly should again top Tsunoda in the standings, but Gasly probably needs a fresh start elsewhere in 2023.

How F1’s teams developed their cars over 2020