Even McLaren has to face up to ever-increasing global demands for more stringent fuel economy and increased efficiency. Hence the coming Artura, the car that fits into McLaren’s Super Series category with the 720S and 765LT, will be highly sensible as well as highly efficient. Will it also be highly fun to drive? We don’t know yet but a gander at the spec sheet suggests it will.

First, there’s that all-new hybrid drivetrain. We knew this was coming five years ago when McLaren said to expect fewer cylinders than their mighty V8s and the addition of electric power. McLaren has made hybrids before, but those were in the Ultimate Series cars like the P1 and the Speedtail. This one is in the more manageable and even barely more affordable Super Series, sort of McLaren’s mid-level super cars lineup.

Hence, the 765-hp 4.0-liter twin-turbo V8 from the 765LT, the current king of the mid-level “Super Series” McLarens, is out, at least as a drivetrain for the new Artura. The Artura will be powered instead by a 3.0-liter twin-turbo V6 mated to an eMotor, as McLaren calls the electric component of its new hybrid powerplant. Together the two produce 671 hp and 531 lb-ft of torque. Yes, that’s down compared to the 765 hp of the 765LT. It’s even down compared to the 710 hp of the 720S, but McLaren plans to make up for it by reducing curb weight. 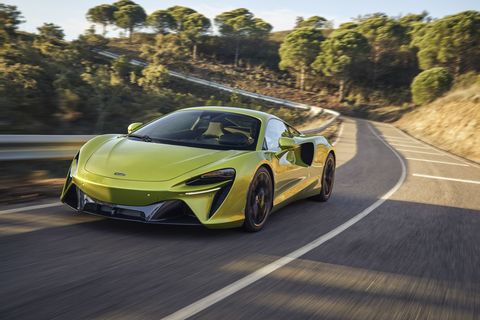 That begins with the first use of the all-new McLaren Carbon Lightweight Architecture, which has been “uniquely optimized” for use with this particular hybrid powertrain. And if they built the architecture around a hybrid powertrain, one could assume that future McLarens will also be hybrids. In fact, one could really stretch it and say all future McLarens will be hybrids, except those that are pure electrics. But that’s just speculation for now.

The new architecture helps lower curb weight to just 3,303 pounds as measured by European DIN standards; SAE figures are not out yet and might be a little heavier.

Then there’s the fuel economy, which may have been at the root of all these changes to begin with. Again, we don’t have SAE or EPA numbers, but the (optimistic by our standards) EU WLTP standards promise a remarkable—for a supercar—50-plus mpg. Even if our EPA standard is 10 percent less than that, you’re still talking 44 mpg from a car with a top speed of 205 mph! That sound you hear is the critics saying, “Oh well, um, uh, yes, well there’s that I suppose…” 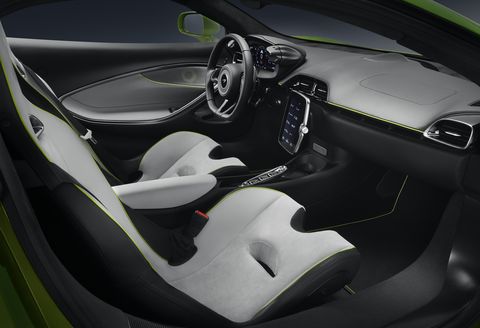 Then we have to decide if it’s going to be any fun to drive. Since McLaren has never made a car that wasn’t, one could assume it will be. Let’s look at some of the important parts anyway. The front wishbone is bolted to the Artura’s carbon fiber structure while the lower wishbone is bolted to the deformable aluminum crash structure. The rear suspension is all-new. There’s an upper wishbone, two lower links and a tie rod in front of the rear wheel center to maximize stability and precision and reduce understeer when accelerating out of a corner. The Pirelli P ZERO Corsas are wider on the Artura for additional stability and better traction.

So it certainly should be fun to drive.

McLaren did not surrender comfort in the new Artura, either. Quiet ride comes from fluid-filled mounts for the powertrain as well as sound-absorbing devices on the inside sidewalls of the Pirellis. In the cabin, U.S. customers will get power-adjustable and heated Comfort Seats, or they can order a new Clubsport seat that actually adjusts, unlike some performance buckets. The Artura can accommodate drivers up to 6’4”, McLaren says. There’s even an all-new MIS II infotainment and connectivity system. Other modern features include Intelligent Adaptive Cruise Control with Stop/Go and OTA updates to keep your car up to date as new and better advances become available.

What’s missing? Well, you’ll need $225,000 and you’ll have to wait until the third quarter of this year to get one. To be safe, go send one of your staff down to the McLaren dealership to start camping out now.