Toyota man Ryo Hirakawa came within an ace of the SUPER GT title on Sunday at Fuji Speedway, but two instances of Supras clashing on track opened the door for Honda to steal the prize at the last moment.

When analysing the outcome of last weekend’s Fuji season finale, it’s important to remember that while Hirakawa ran out of fuel exiting the final corner, he still made it across the finish line in second, only 5.940s behind Naoki Yamamoto’s winning Honda NSX-GT.

In a race with no safety car to bunch up the field, Yamamoto and Tadasuke Makino were able to recover from a deficit to the #37 TOM’S Toyota that peaked at around 18 seconds before the pitstops to put themselves in a position to snatch the crown at the finish.

But the Team Kunimitsu drivers can be grateful for not one, but two instances of Toyotas clashing on track on Sunday to ease their path to the title.

The first occurred on lap five between the SARD GR Supra of Heikki Kovalainen and Sacha Fenestraz in the #36 TOM’S machine, who were scrapping over third place. The catalyst for the contact was the lapped Drago Corse Honda NSX GT3 of Jake Parsons, who tried to let Kovalainen through at the inside of the Turn 14 left-hander by moving to the outside, forcing the ex-Formula 1 star down low and into the path of Fenestraz.

While the #36 car came off unscathed, the SARD machine suffered significant damage to the suspension and bodywork as well as a puncture, prompting Kovalainen to dive for the pits and effectively ending a run that began with the team’s best grid slot in four years.

“It’s a bit annoying,” Kovalainen told Motorsport.com. “I was lining up to go in the inside [of Parsons] into Turn 15, but Sacha already sent it over the kerb. When I moved to pass, the was there, I think he was on the kerbs because I was all the way over to the inside.

“Shit happens sometimes. It was hard racing and this time I was on the receiving end. I haven’t had many crashes in my SUPER GT career, but it’s part of the game.” 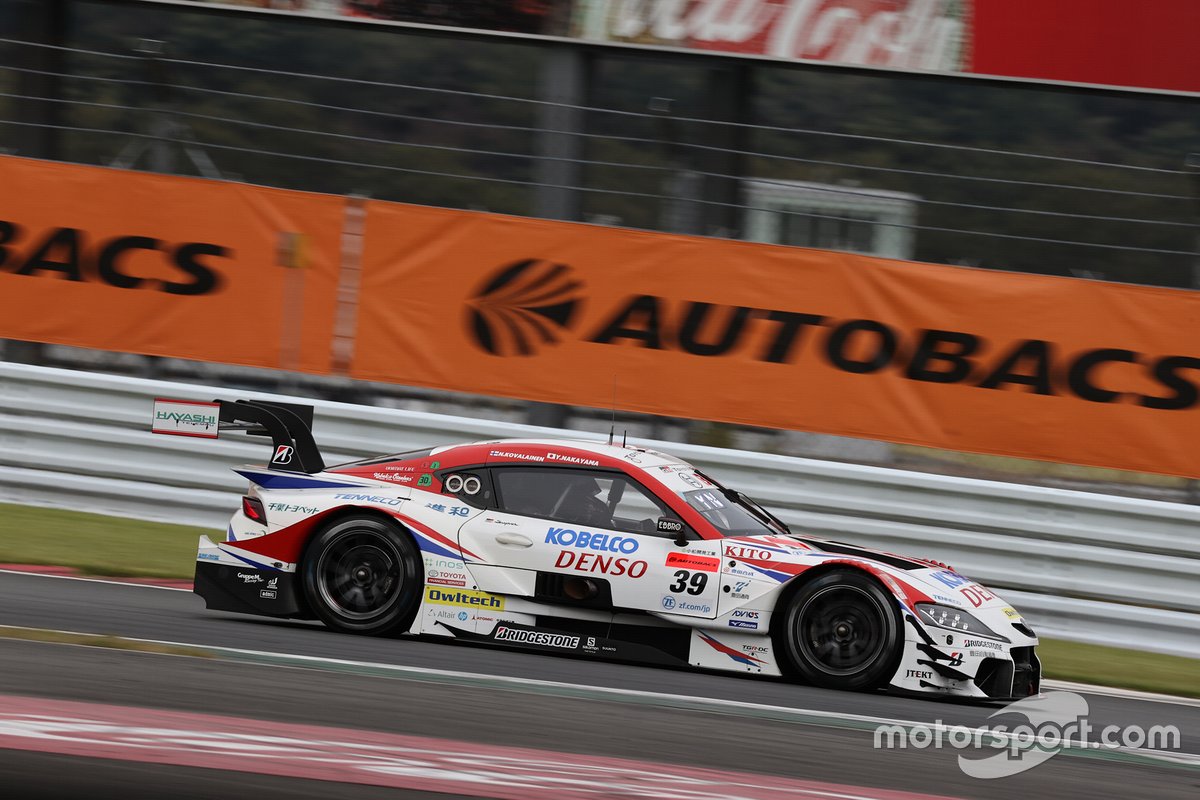 For his part, Fenestraz told Motorsport.com: “On the exit of the right [Turn 13], Heikki went to the right to go to the outside of the GT300, and I went to the inside, and then the GT300 closed the door, and Heikki moved to the inside and we had contact.

“I didn’t realise they had a puncture, I just saw it after my stint. I saw Heikki quickly and said sorry. We don’t want to have contact within Toyota, I didn’t mean it. Luckily we didn’t have much damage, but unfortunately it was more serious for them.”

Kovalainen was coy on what kind of result the clash could have cost he and Yuichi Nakayama, as it came too early in the race to gauge long-run tyre performance.

“It’s hard to say,” said the Finn. “Today was really all about tyre performance. In these cold conditions it’s quite dramatic if you get some degradation, and when the drop comes it’s quite dramatic. The grip level didn’t seem that high, but the tyres weren’t graining.

“We had a different tyre to the cars around us, so it might have been ok. If the tyre had lasted ok, we would have been up there. But we didn’t get the chance to see.”

Whether Kovalainen would have been able to hold up Makino for any significant period of time is a matter of conjecture. But, if you look at how long it took the ex-Formula 2 racer to clear Fenestraz in the #36 TOM’S car, it’s likely to have been at least a few seconds.

Makino first went to the inside of Fenestraz at the final corner on lap 20, but the straight line speed advantage of the Supra allowed the Frenchman back ahead by the time the pair arrived at Turn 1. Makino was then stuck until he dived up the inside Turn 10, meaning he spent almost an entire lap held up by the #36 Toyota.

The #100 Honda was around 14 seconds behind Kenta Yamashita’s Toyota at the end of lap 19, but by the time Makino had cleared Fenestraz the gap had grown to 16s. If Kovalainen had been in the mix as well, even more time would likely have been lost, which would have given Yamamoto a harder time catching up the leading TOM’S car in his stint. 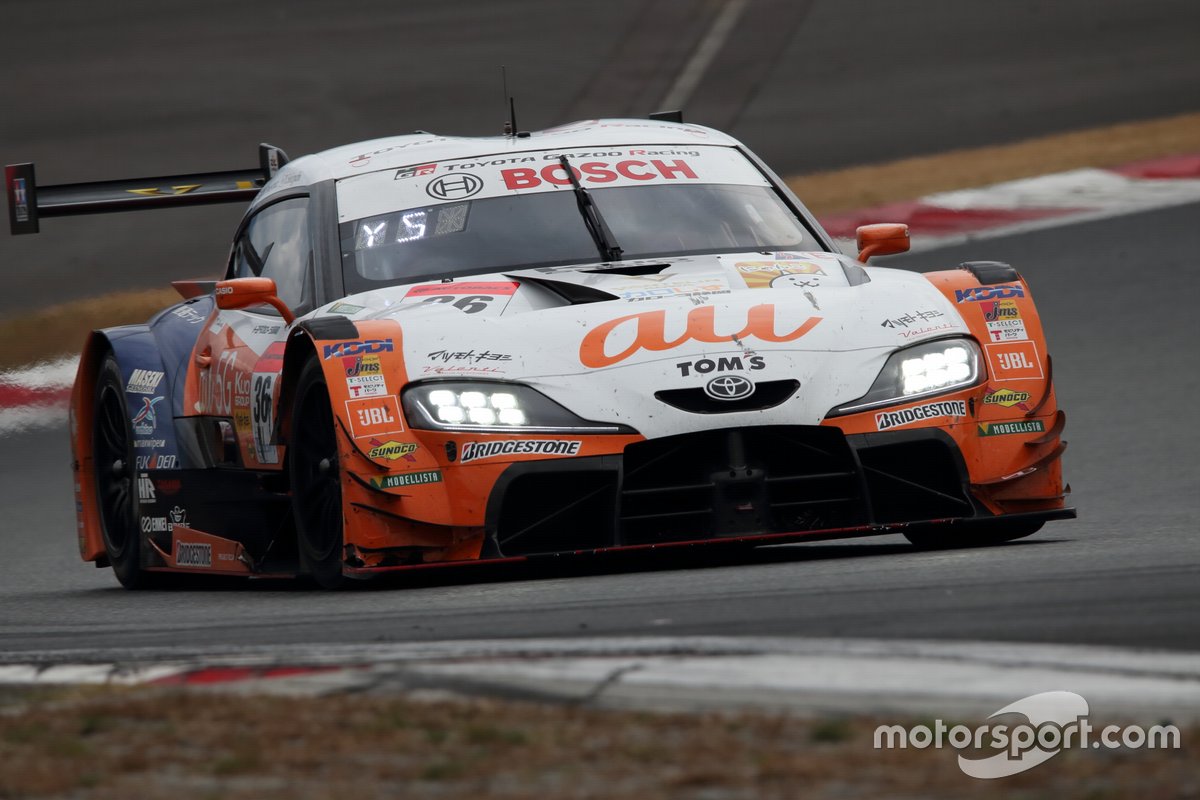 As it was, Yamamoto began his 43-lap stint in fourth, even though Makino had climbed to second during his time in the car – as the #100 Honda was jumped by the #14 Cerumo Toyota, which didn’t change tyres and briefly took the lead, and the #36 TOM’S car, which got an overcut by stopping two laps later than the #100.

At the end of lap 26, it was the turn of Yuhi Sekiguchi (taking over the #36 from Fenestraz), to struggle on cold tyres, allowing Yamamoto to gain back a position. But four laps later, Sekiguchi was able to take advantage of Yamamoto losing time in battle with a fading Sho Tsuboi in the Cerumo Supra to draft ahead along at the start/finish straight.

Tsuboi hugged the inside of the track, prompting Sekiguchi to go to the outside in his bid to clear his rival, but on his worn Bridgestone tyres Tsuboi simply understeered straight into Sekiguchi’s car at Turn 1. The contact was enough to nudge the #36 car off the track and allow Yamamoto through back past both Toyotas and into second.

Had Sekiguchi settled into third and picked off Tsuboi some corners later, as he surely would have done on his fresh rubber, he could have made life much harder for Yamamoto. And although keeping Yamamoto behind indefinitely may not have been feasible, it’s certainly conceivable that Sekiguchi could have given his TOM’S stablemate Hirakawa the extra six seconds needed to run out of fuel and still win the race. 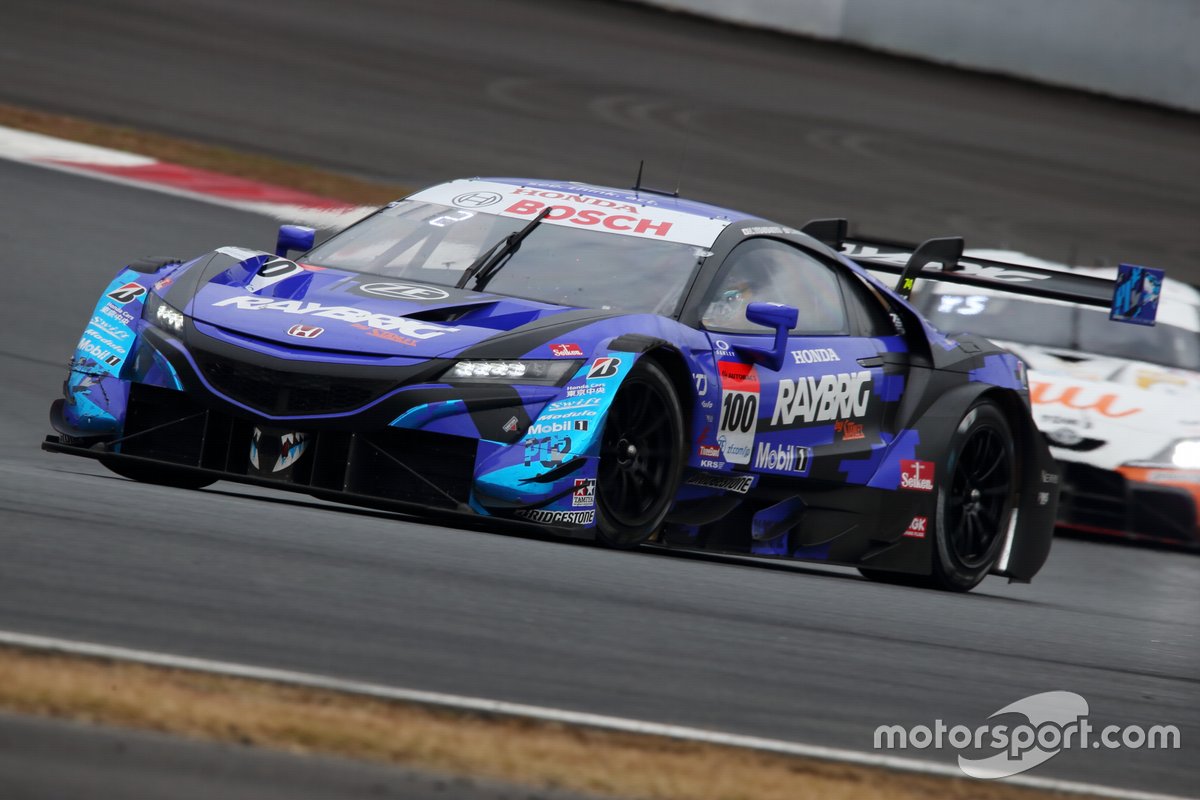 The collision also effectively ended the rapidly evaporating hopes of Cerumo pair Tsuboi and Kazuya Oshima, who had battled their way up the order after qualifying a lowly 13th. Tsuboi was able to get the car back to the pits, but it was to no avail.

“At the time of the collision [with Sekiguchi], the bonnet came loose, and I think because of that the electrical system short-circuited,” explained Tsuboi. “I came back to the pits, we fixed the bonnet and we returned to the track.

“The car felt normal after the collision, but the electrical system shorted again and finally we could no longer accelerate. So I think it was all down to the collision.”

As for the Cerumo crew, they were left to rue another bad qualifying performance that left them with too much work to do on race day. Once it became clear the no-tyre change gambit wasn’t going to work, it might have been advisable to pit for a second time and hope for a caution, although Tsuboi staying out did at least allow Sekiguchi to repass Yamamoto.

“We were thinking about it since Saturday,” said Tsuboi of the team’s unconventional strategy. “We qualified poorly, so we thought we had to try it to be able to compete, but it didn’t work out. It can’t be helped [about the championship] because of the result of the race. I feel like we have to be a bit stronger.”

After the third Fuji race of the season at October, Oshima and Tsuboi finished second behind SARD pair Kovalainen and Nakayama, and found themselves leading the points with three races remaining. But it was to be their last points-scoring finish of the season, leaving them all the way down in seventh overall in the final championship table. 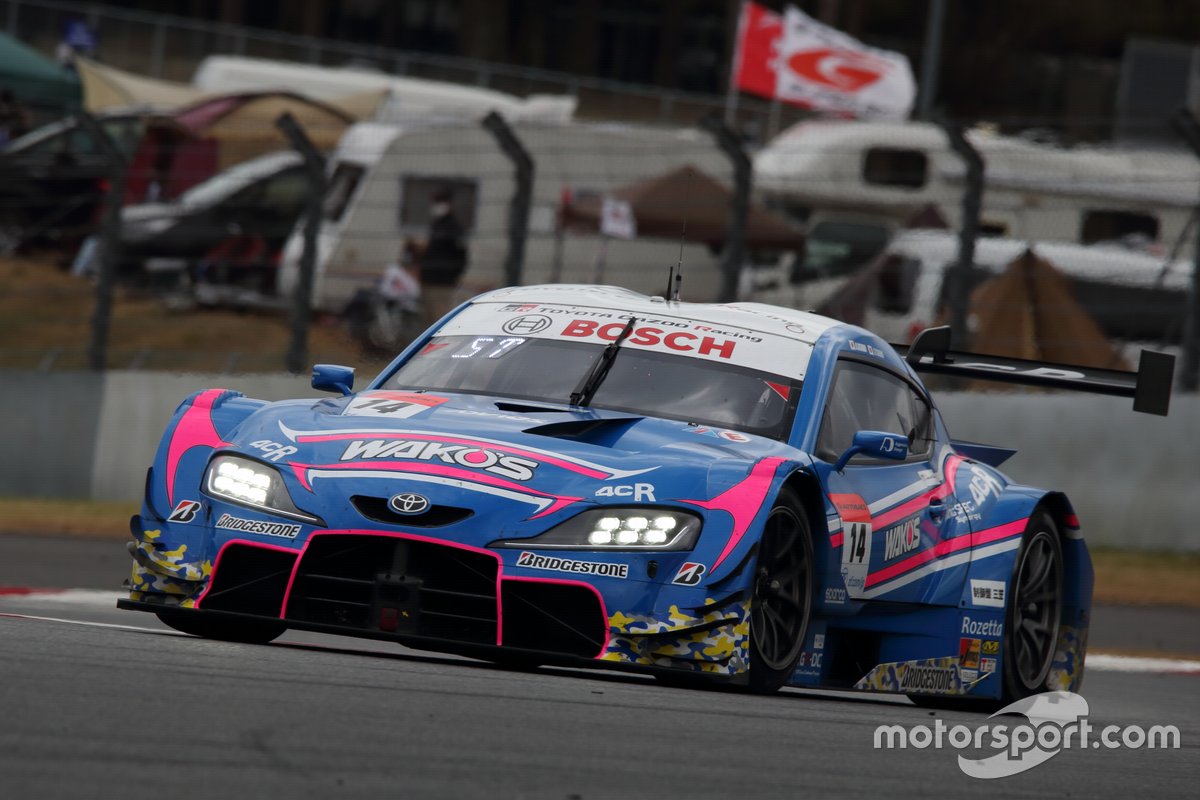