The good times are back on Talladega Boulevard.

On one of stock car racing’s busiest, most famous and most-Mardi-Gras-like streets, it is as if the pandemic never existed. Even though the virus continues to plague various parts of the country, it is not among the first 100 topics of discussion that might come up along the Boulevard this NASCAR race weekend.

The conversation here, in the infield roughly parallel to the backstretch at Talladega Superspeedway, tends toward beer, liquor, racing, boobs and, somewhat down the list, college football.

Politics is a subset. Trump 2020 and Trump 2024 flags fly from every fifth or sixth vehicle, and a black Dodge Ram’s windshield is protected from the harsh Alabama sun by this flag: “F— Biden and f— you for voting for him.”

Nothing here is understated.

The Talladega Boulevard experience—and, indeed, the entire infield experience at NASCAR’s biggest track—is returning to the sort of unhinged party that prevailed here before Covid scrambled the world of sports and closed the gates of speedways.

For this weekend’s NASCAR events, for the first time since the fall of 2019, there is only one minor restriction for fans. Masks are required inside every building, including restrooms, on the track property. Otherwise, the restrictor plates that prevented or dampened fun here are gone. And the general glee along the Boulevard makes that clear. It’s as if school is out for summer.

Cameron Wainwright, a contractor from Hammond, Louisiana, is here with two friends—banker Hart Bordelon and radio station manager Brian Shirey. They are long-time Talladega infield residents, back for the first time since fall 2019. 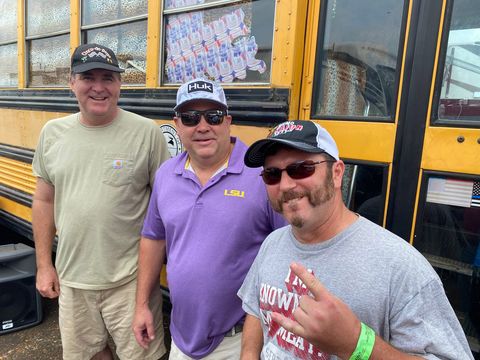 “We’ve just been trying to live through COVID,” Wainwright said. “It’s fun to be back. You never know what’s going to happen here, but it’s always going to be fun.”

The Hammond guys are ready for anything. They’re well-stocked with ribeyes (Saturday lunch and dinner), booze (Maker’s Mark, Woodford Reserve, etc.) and that most important accoutrement in all things Talladega—beads.

At Talladega, beads are not for wearing. They are for sharing, currency of a sort. Display of certain body parts by a female earns her a circle of brightly colored beads. Mardi Gras perhaps invented this concept; Talladega fans might have perfected it.

The Me Too movement has not reached Talladega Boulevard. Along the strip, there are stripper poles. When night falls, there will be strippers.

“The only thing you can be sure you’ll see here tonight is nudity of some sort,” said Nick Burgess, a fan from Atlanta. “If the race is not good, the scenery is.”

The boys from Hammond were ready for the evening pedestrian parade that turns the Boulevard into a bacchanal of sorts. For the weekend, they’re living in a 1991 model school bus, one purchased from the Tangipahoa (La.) School District for $1,700. “It’s a $1,700 school bus with a $10,000 sound system,” said Wainwright.

The interior is decorated in not-exactly-modern Fun Guy colors and fabrics. The key items are a long couch and a very experienced recliner, the better to catch naps after a long night of entertainment.

So, are you here for the race or the party? “What race?” Wainwright asked.

Some Boulevard activity stretches beyond accepted norms – even beyond accepted laws. Track officials post security along the boulevard and in other camping areas, but “fun times” typically are acceptable as long as certain barriers aren’t crossed.

“We strive to provide a safe, fun environment for all fans that are here,” track president Brian Crichton said. “Talladega is known for a unique social atmosphere. If we see it happening, we will address it. We don’t have a special patrol going around the infield for that, but we do have security looking for things that we won’t tolerate. There obviously are some things we just won’t tolerate. But we want to make sure that people are having fun. 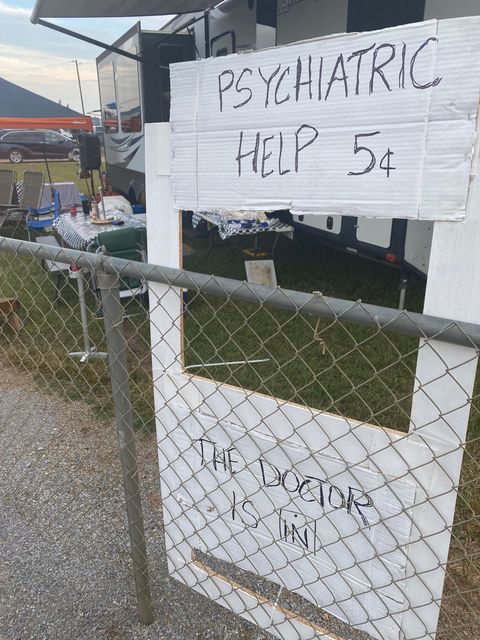 “People come out here for a week, not just a day. We want to cater to all. We have lots of fun family activities. We’re trying to cater to all groups.”

Crichton said he and his staff have gone the extra mile to welcome fans back to the track. “We’ve welcomed the first camper in each campground with a banner and a cooler and Yeti cups, and I have 500 limited edition coins that I’m passing out to people in the campgrounds and on the concourses,” he said.

The track hosted a free rodeo in the huge infield Friday night and ended the evening with fireworks.

The infield opened to campers at 8 a.m. Wednesday and by mid-afternoon Saturday was virtually full. It was a far cry from spring 2020 when the pandemic forced an empty infield. It looked like the middle of winter on the Great Plains.

“I was sitting up in race control that weekend and looking down at the empty Talladega infield,” Crichton said. “It was surreal. You wondered if it was a bad dream. It was the anti-Talladega for what we’re all used to.”

Now Talladega and its Boulevard are back. Let the good times roll.