NASCAR Executive Vice President and Chief Racing Development Officer Steve O’Donnell says he is pleased with the high downforce, low horsepower rules package — just not on short tracks and road courses, and no longer on tracks smaller than 1.5 mi.

The NA18D configuration is now reserved only for the intermediate and superspeedway circuits following Wednesday’s 2021 NASCAR Cup Series schedule reveal.

The high downforce rules package made its debut in 2019 and was used across the entire schedule, featuring an 8″ spoiler, 2″ splitter overhang and vertical fencing for the radiator pan. The only variable was the horsepower-reducing tapered spacer which was set to 750hp for short tracks and road courses or 550hp for all ovals greater than 1.3 miles.

The package has been one of the most polarizing topics in NASCAR over the past two and a half years as it dramatically reduces off-throttle time for drivers on intermediate and two-mile tracks. The goal for NASCAR was to create closer competition, or at least the visual of cars closer together on its largest tracks, but there have been drawbacks associated with it.

For one, drivers no longer needing to lift off the throttle is widely regarded as an impairment to the talents that landed them in the Cup Series in the first place. Further, the increased downforce has stifled passing near the front of the field.

Track position has never meant more at the highest level of the sport.

That was on full display on Sunday night at Las Vegas Speedway when Kurt Busch caught a fortuitous caution during green flag pit stops that trapped several contenders off the lead lap and placed his No. 1 Chip Ganassi Racing Chevrolet at the front of the field.

Busch won with a car that failed to break into the top-10 and didn’t score a single stage point during the first half of the race. Once out front, after successfully executing a pair of restarts, Busch was largely untouchable.

Those conditions were even worse on short tracks and road courses in 2019 — Denny Hamlin making the argument last October that Cup cars do not need a drafting spoiler for tracks where they aren’t drafting.

NASCAR and the teams agreed to revert to a lower downforce package for those track types in 2020.

NASCAR has again increased the threshold for which tracks will utilize NA18D in 2021 by mandating Darlington Raceway (1.366-mi.) and Nashville Superspeedway (1.33-mi.) use the low downforce rules next season — shortening to a 2.75″ spoiler, .25″ splitter overhang and removing the vertical fencing from the radiator pan.

“When you look at Darlington, it was kind of one of those in-betweeners,” O’Donnell said. “Working with the drivers, felt like going ahead with the low downforce package next year at that facility will work well.

“The others we’re really happy with in terms of the high downforce package. We’ve seen some really good racing. That’s kind of the model that we’ll employ.”

Even at 1.366-mi., Darlington often races like a short track due to the long straights and sweeping corners. The track’s signature trademark is the Darlington Stripe, which occurred when drivers brushed against the wall in the pursuit of speed.

With the increased downforce and reduced horsepower, drivers ran a much lower line at Darlington, and only moved up the track once tires started to wear — something that happened frequently enough over the past two years due to an increasingly more abrasive track surface.

But the Xfinity Series races at Darlington have been amongst the most entertaining in the sport over the past two years and that division uses a higher horsepower and low downforce package across the board.

Nashville is even shorter than Darlington, meaning it made sense to employ the lower downforce configuration there, too.

O’Donnell is always quick to point out, and accurately so, that NASCAR originally wanted lower downforce for short tracks and road courses and high downforce, low horsepower everywhere else but were vetoed by teams who preferred just one package all year round.

NASCAR responded to that by selecting high downforce across the board in 2019.

“We’re actually really happy with the high downforce package as we’ve seen it at the other facilities,” O’Donnell said. “When we looked at Darlington specifically, it was kind of right in between very similar to the move we made at Phoenix.

“If you kind of go back on our mindset … we actually wanted to have two at the time, but we ended up with one throughout.

“Through the work with the industry, we were able to tweak that and start mixing and matching where we felt like we’d have the best racing possible. Darlington was kind of an in between. We kind of went through with fingers crossed. You saw a couple races there, some good, some not as good as we would have wanted to see.”

O’Donnell said internal data and industry feedback were leading factors in lowering downforce and increasing horsepower for Darlington and Nashville.

“The feedback was low downforce we really believe will put on the best race at Darlington,” O’Donnell said. “That’s why we pulled that lever. Then Nashville Superspeedway kind of mirrors Darlington. We’ve been there before, feel like that gives us the best chance to go out and really put our best foot forward in a new market.”

That high downforce and low horsepower delivers the best product everywhere else remains a hotly debated topic across social media and within the garage itself. Typically, the debate draws a line of delineation between casual fans seeking cars that are closer together and hardcore motorsport fans seeking a more authentic product.

NASCAR president Steve Phelps has repeatedly claimed that the low power, high downforce package is largely supported by its digital fan council subscribers to the tune of 80 percent.

He echoed the argument in June during an appearance on a NASCAR fan podcast and YouTube program.

“So, I’ll start with the data itself,” Phelps said. “We have a 25,000-person (online) fan panel, which we call our Fan Council. Our fan council is made up primarily of avid fans.

“So that 80-20 percentage split is coming from our fan council. They are our most avid fans. They take time out of their day to answer the questions that we have.”

Historically, the Fan Council questions have been somewhat leading or misleading, with a summer 2018 fan council (below) segment being used as a pretense for NASCAR’s decision to implement the high downforce package in 2019. 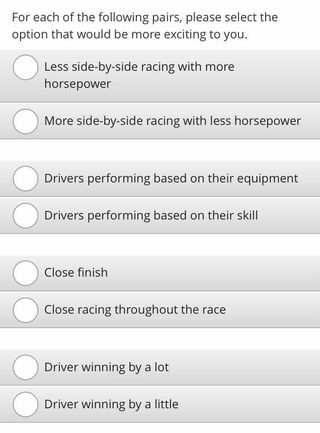 More recent questions have been phrased in the following manner: 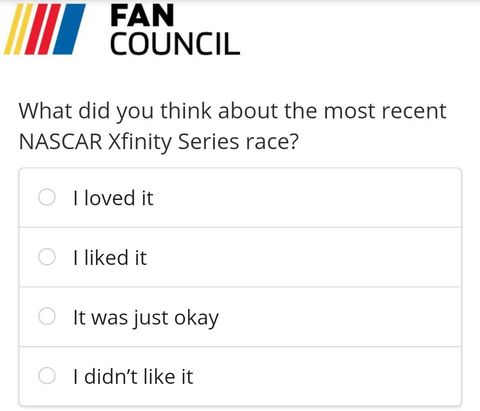 Phelps suggested that the on-track product got worse as NASCAR progressively took the downforce off the cars from 2015-18. NASCAR also began reducing horsepower through the tapered spacer at the same time it began reducing downforce in advance of an upcoming engine formula that is expected to top out at 550hp.

Over the past two years, NASCAR has once again begun to take downforce off the cars — intermediate tracks and larger currently utilizing NA18D. All 36 races utilized high downforce in 2019, 22 of the 36 were scheduled to use the package in 2020 and just 17 of the 36 races will use it in 2021.

NASCAR hopes to debut its Next-Gen car in 2022, using much of what it has learned over the past three years in crafting a series of rule combinations for the new spec-based chassis and body combination.

Do you want to see more or less of the high downforce, low horsepower rules? Tell us in the comment section below.

Tearoff that ended Miller’s MotoGP race up for auction

Vettel has no regrets about his time at Ferrari