Dakar is easily one of the most perilous rally events in the world, with the terrain and the elements meant to test the machines and the crews. The list of DNFs can attest to this, as can the numerous injuries that racers and support crews have sustained over the years.

Until recently, the individual teams have only had to worry about protecting gasoline and diesel powertrains, in addition to the pilots, when it came to designing the machines themselves to withstand the grueling race. In a matter of weeks, Audi will have to worry about protecting an EV powertrain and battery as well as it fields the RS Q e-tron prototype in the endurance event. This has required plenty of new hardware and some new approaches to making the vehicle crashworthy and durable.

Audi started with a tube frame as the main protective (and load-bearing) element of the RS Q e-tron, using a heat-resistant, alloyed quenched and tempered steel, borrowed from aerospace manufacturing, one that is composed of chromium, molybdenum, and vanadium (CrMoV). The drivers are also protected by composite panels, made of carbon fiber-reinforced plastic (CFRP), located in the spaces between the frame, helped by additional tear-resistant Zylon that protects against sharp objects from the outside.

Audi relied on its experience with DTM and LMP cars dating back to the late 1990s in designing the tube frames. 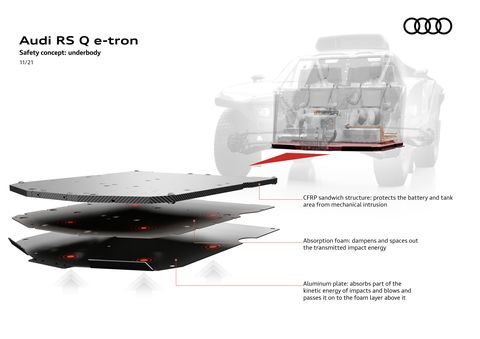 “The structural design of the frame incorporated methods and findings that we have honed over decades in many disciplines,” says Axel Löffler, chief sesigner of the RS Q e-tron.

When it comes to protecting the high-voltage battery, Audi relies on CFRP structures and Zylon, with the centrally located battery protected at the lowest layer by an aluminum plate. Above it is energy absorbing foam that distributes impacts to the sandwich structure above it. The CFRP sandwich structure, above the foam, protects the battery and the gasoline tank of the energy converter. The underbody is thus 2.1 inches thick, which is quite substantial, but it’s made to be disassembled and replaced in the event of damage.

“With these designs, we see a direct transfer of our knowledge from the circuit to cross-country rallying,” adds Löffler. “And there are further parallels, for example in the loads for the chassis and underbody. Admittedly, the energies are higher off-road because of the long suspension travel, the duration of the load and the vehicle mass. But the g-forces measured are similar to those of Le Mans prototypes.” 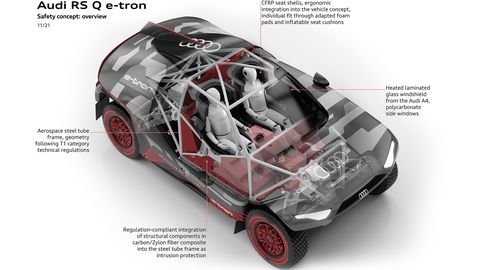 The body of the RS Q e-tron itself is made of Kevlar, CFPR, or composites, depending on which component we’re looking at. There are some off-the-shelf parts to be found as well even in a vehicle as unique as this one: The heated laminated glass windshield, for example, comes from the Audi A4. The seat shells inside are made from CFRP, similar to the ones used by Audi in LMP and DTM vehicles.

The crew has a number of other safety systems to rely on, including an on-board fire extinguishing system and an ISO monitor that detects dangerous fault currents. The whole team, as well as the rescue teams of the organizer, have also gone through high-voltage training.

Stage I of the Dakar Rally starts January 3.