The Indy Autonomous Challenge at Indianapolis Motor Speedway, which featured driverless race cars competing against each other, resulted in a significant amount of lessons learned for the nine teams entered but also sent several back to the drawing board.

Utilizing specially prepared Dallara AV-21 race cars (built upon chassis used in Indy Lights competition), teams took to the 2.5-mile IMS oval with four practice laps to get up to speed and two laps that were recorded.

Initial expectations of speeds between 100 and 125 mph were significantly eclipsed by several teams, most notably by TUM, which ultimately won the competition with a combined two-lap average of 135.944 mph. 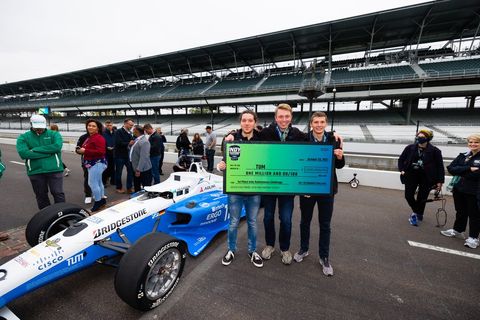 “Participating in the Indy Autonomous Challenge allowed our team to advance autonomous driving technologies and being able to take first place after two years of hard work acknowledges that we had an outstanding team,” TUM team leader Alex Wischnewski said. “Our next goal is to win a high-speed autonomous head-to-head race.”

While head-to-head races are likely still a distance away—the Challenge evolved to allow just one car on the racetrack at a time—autonomous vehicles will continue to grow in attention and popularity.

Another Challenge entrant, PoliMOVE—a hybrid entry comprised of students from Italy’s Politecnico di Milano and the U.S.’s University of Alabama—shocked those in attendance when its entry topped 151 mph in straightaway speed. But the combined team was unable to top TUM’s total average, clocking in its own best two-lap average effort of 124.450 mph.

Both TUM and PoliMOVE came into the competition as the anticipated favorites, and lived up to their advance billing.

But the Challenge also had a number of incidents that put a damper on things for several teams, including four cars that made contact with IMS’s famous walls during Saturday’s main event, as well as several others that hit the walls during Thursday’s practice session (Friday’s session was rained out). 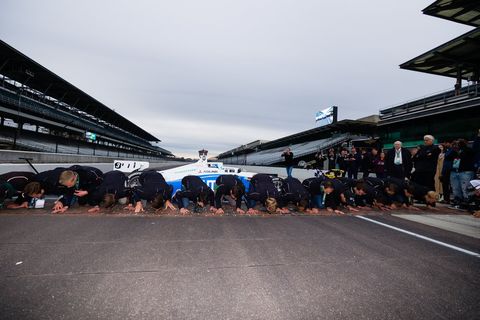 Originally—when the the event was introduced in a video press conference on January 11, 2021 by the IAC organizers and teams, along with Indianapolis Motor Speedway president Doug Boles and Penske Entertainment boss Mark Miles—the goal was to have a 20-lap head-to-head race. Speeds were an unknown quantity, although several teams hoped to close in on 200 mph.

In the final, EuroRacing, which included students from schools in Italy, Switzerland and Poland, cranked out a first-round best speed of 131.148 mph.

PoliMOVE then went out and recorded a top straightaway speed of just over 157 mph on its warmup laps. Unfortunately, the team’s day came to a premature end when it hit the wall heading into Lap 2.

EuroRacing, meanwhile, upped the ante to have a field-best one-lap run of 139.009 mph. But human error—not mechanical error—doomed EuroRacing’s hopes as an inadvertent programming mistake cost the team the championship.

EuroRacing’s car apparently was programmed to complete just five laps—four warmup laps and one timed lap—instead of the prescribed four warmup laps and two timed laps. As a result, the 139.009 mph effort went for naught as the second timed lap saw the car slow to just over 90 mph.

And when PoliMOVE hit the wall, along with another expected top contender, the combined team from MIT, University of Pittsburgh, Rochester Institute of Technology and Canada’s University of Waterloo, hit the outside pit road wall head-on coming out of Turn 4, it all but assured TUM of the championship.

While teams enjoyed the experience, putting in over 50 days of on-track preparation at both IMS and nearby Lucas Oil Raceway, it’s unclear whether there will be another Challenge anytime soon.

Likewise, it’s unclear if IMS would host another Challenge. Originally, more than 20 teams comprised of students from more than three dozen colleges and universities worldwide, had expressed interest in taking part in the Challenge.

But the COVID-19 pandemic and resulting financing/fundraising difficulties for many potential entrants caused the number of teams to actually take part drop to just the nine cars that were on hand for Saturday’s Challenge.

Still, much was learned by the teams that participated. What’s more, those same teams also learned that much more work and study is required to improve the autonomous vehicles to become what teams ultimately envision.

“This is an extraordinary challenge, calling on the best and brightest of our university students and faculty worldwide to engineer software that will have a significant impact on the future of all classes of transportation,” said Paul Mitchell, president and CEO of Energy Systems Network, and co-organizer of the Challenge along with IMS. “The diversity of the teams, representing 10 countries on four continents, shows the brilliance and ambition of our young engineers around the world.”