Bobby Epstein was on the phone, looking out his office window. “I’m watching the trucks from Moto GP load in,” he said.

It has been a good year, and there are three huge events, including the motorcycle race, still to come. The chairman of Circuit of the Americas, the road course in Austin, Texas, had a hand in every aspect of building and running the facility. Last year, well, COVID-19 made his job difficult.

“Getting to race, after a year of getting to do nothing – it’s been great,” Epstein said. The 2020 season “was hard for a lot of reasons. You’re in the event business, and there are no events, it’s tough. This year is that much sweeter because of how bad last year was. I think the people here appreciate this year all that much more.” 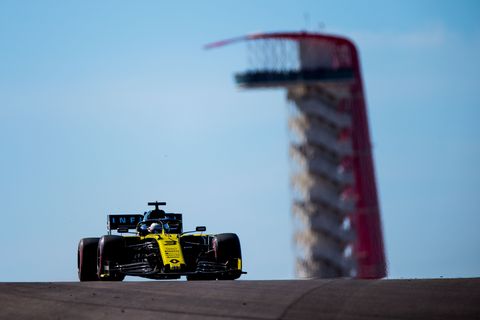 This weekend, Moto GP, the top international motorcycle road racing series, is competing in the Red Bull Grand Prix of the Americas, marking the first time the series has left Europe all season. Later this month, it’s the Formula 1 United States Grand Prix, in the only F1 race in the U.S. This year, anyway. More about that in a moment.

The F1 race is sold out.

“I think we could have just kept selling tickets if we had room,” Epstein said. “Even so, I think it’s going to be the biggest event on the planet this year, since the Olympics couldn’t have fans. I think we are well over 350,000 people for the weekend,” Epstein told Autoweek.

The staff required is massive; Epstein has added more than 1,000 employees for the F1 race. And he’s expecting a full house, even though COVID is still an issue. The track also hosts musical shows, and “We were seeing massive no-show rates for concerts and events just six weeks ago —no-show rates of 30 or 40 percent,” he said. “The last two shows, we saw less than five percent.”

It’s hard to believe, but the upcoming Formula 1 race is the last in the track’s 10-year contract with F1. How are negotiations going? “I have a non-disclosure so I can’t really say too much, but I’m pretty optimistic that we’re going to get there.”

Epstein has reason to be optimistic—word is within F1 that renewing COTA is a no-brainer. Like most F1 events in the U.S. over the years, COTA had massive crowds for the first few years, then the crowds began to decline. COTA has held on long enough for the race to become an American institution, and in the recent past, the audience has come back.

It doesn’t hurt that Epstein learned to book big concerts as part of the F1 weekend. This year it’s Billy Joel and Twenty One Pilots. Later this year, he has the Rolling Stones.

“Music’s important,” Epstein said. “We don’t want the venue to just sit. We have a lot of parking spaces and concession stands and restrooms, and we don’t want to see those go underutilized. As great as the track is for fans and drivers, we think the amphitheater we built is great for musicians and music fans, especially from an acoustic standpoint. We’re just taking advantage of what we have here.”

NASCAR will also return on March 25-27. One series not at COTA: IndyCar, not since Colton Herta won his first race there in 2019. That’s OK with Epstein. “I think we’re comfortable with the number of big race events we have given the calendar in general, we’ve got Moto GP coming back in the spring, and we have NASCAR coming back in March… I think those major events in the spring ought to be pretty good. We think we’d dilute ticket sales across the board if we had all three.”

Next year, Formula 1 will race for the first time in Miami, a three-day event May 6-8 in Miami Gardens, run around the Hard Rock Stadium, home of the Miami Dolphins football team, and rumor is Las Vegas may be in the mix for 2023 or 2024. Many thought the Miami race would be just before or after COTA in the fall, requiring the equipment to only make one trip to and from the U.S. instead of two.

Epstein is very happy it’s in the spring. “I think where it sits on the calendar, it’s a nice bookend for us. Both events are so uniquely different that I think we’re going to be complementary. I’m happy about the date. I think we’ll deliver that much more F1 to the fans.

“And I think we’re pretty comfortable in our skin at this point. I can’t believe how fast time has gone but we’ve developed a tradition and a history. It was a decade ago we had our first race, and we’ve seen fans come back year after year and camp in the same spot in the campgrounds, and we’ve seen the campgrounds grow with new people who come in, and I don’t think that atmosphere is going to change.”

One advantage of being more than 10 years old is becoming a major part of the Austin community.

“We’ve made a huge effort, and I think it started with the Mother’s Day food drive—it was an actual drive on the track—and we raised enough for 2 million meals for the community. It was shortly after COVID hit,” he said. “And we had two major storms in the Gulf, and we became an evacuation center for people to find shelter.”

COTA has also been a site to get the coronavirus vaccine.

“We did 15,000 vaccinations a month,” Eptein said. “We try to be good stewards and partners for the community.”

Speaking of the community, Epstein has ambitious plans for the track, and for the rest of the adjacent land they own.

“We finally got approval shortly before COVID hit to develop out the campus, and that’s been a goal for a long time. We have 1,300 acres, and a lot of it is across the street from the track. We’re trying to become an entertainment destination, and that includes automotive and racing-related things like car condos, and a technology and industrial park. We’ll offer trackside lots for people to build their own private garage and trackside home if they so desire, plus a new driving club.

“Those are all the things related to the track, and across the street, we’re planning an amusement park and a water park. We’ve got some ambitious plans, but we have a good wind at our back, I think.”

It has been a difficult road, with financial challenges, lawsuits, pavement issues, a major flood. Are there things he would have done different? Epstein paused, then laughed. “That’s a long thought process, longer than we have right now. I think the path would have brought us to the same place, but I think that path would have been a little less painful.

“Ultimately, we’re winding up where we wanted to be. And that’s to make a long-lasting and positive impact on the city, and give people memories about racing and the music that will last a long time. That’s been my goal in this all along.”