At 2 hours and 40 minutes, IMSA’s GT-only round at Lime Rock is already among the shortest races on the schedule. Thanks to a lengthy red flag for lightning in the area, it was reduced to just 90 minutes. 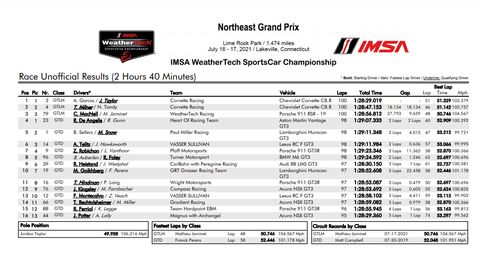 In GTLM, that means the inevitable happened even more quickly than usual. Corvette Racing’s two cars have been the class of the three-car field all season, something that did not change at the short and twisty Lime Rock Park circuit. No. 3, the entry of Jordan Taylor and Antonio Garcia, won the class over the team’s No. 4 entry and the lone non-Corvette in the class, the No. 79 WeatherTech Racing Porsche. While the Corvettes have not yet taken their championships, it has become clear that nothing less than a catastrophe could keep them from winning the class.

“It is what it is,” Garcia said. “We had a ton of fans out here today, and safety comes first. This time we were lucky in that we were leading when the red flag came. For sure, you need to be up there in that position to benefit from the conditions.”

In GTD, the Heart of Racing Aston Martin withstood a strong challenge from the No. 1 Paul Miller Racing Lamborghini to take a class win from pole. It is the second win of the season for Heart of Racing, but their other win in the event at Belle Isle counted only for points in the Sprint Cup for GTD cars. Vasser Sullivan’s No. 14 Lexus finished in third, while the championship-leading Turner Motorsports BMW finished a disappointing fifth.

All five IMSA classes return to action at Road America on August 8. It will be the just the second full-field, non-endurance race of the season. 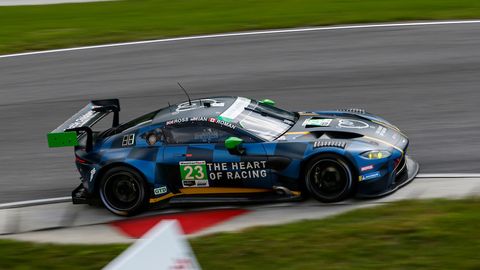