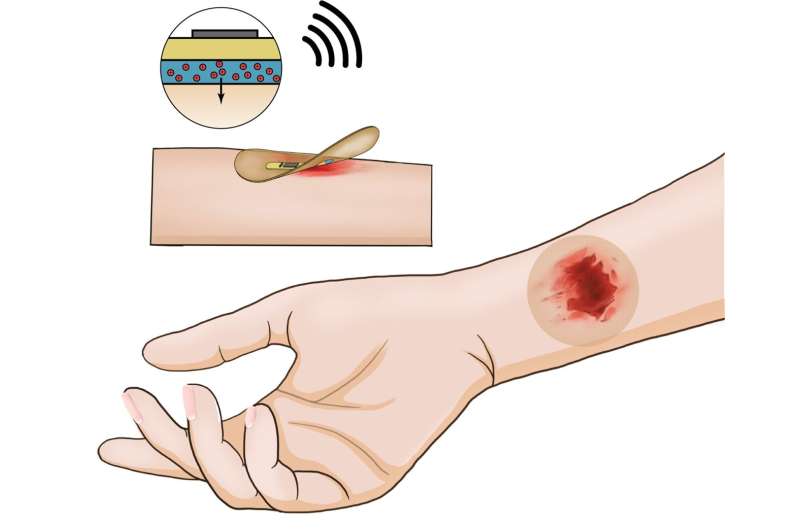 Some wounds just won’t heal. Infections, zyrtec d allergy diseases like diabetes, and suppressed immune systems often stack up to slow healing. Chronic wounds can last months and lead to anxiety and depression. In the worst cases, they are life threatening. Cost of treatment has soared to $25 billion each year.

So far, however, solutions for treating chronic wounds have been few and far between, but researchers at Stanford University now report that they have developed a wireless smart bandage that has shown promise in speeding up tissue repair by monitoring the wound healing process and treating the wound simultaneously.

The smart bandage is composed of wireless circuitry that uses impedance/temperature sensors to monitor the progression of wound healing. If the wound is less healed or an infection is detected, the sensors inform a central processing unit to apply more electrical stimulation across the wound bed to accelerate tissue closure and reduce infection. The researchers were able to track the sensor data in real time on a smart phone, all without the need for wires.

The electronic layer, including a microcontroller unit (MCU), radio antenna, memory, electrical stimulator, biosensors, and other components, is just 100 microns thick—about the thickness of a single coat of latex paint.

All that circuitry rides atop a cleverly engineered hydrogel—a rubbery, skin-like polymer—that is integrated to both deliver healing electrical stimulation to the injured tissue and collect real-time biosensor data.

The polymer in the hydrogel is carefully designed to adhere securely to the wound surface when needed, yet to pull away cleanly and gently without harm to the wound when warmed to just a few degrees above body temperature (40°C/104°F).

“In sealing the wound, the smart bandage protects as it heals,” says Yuanwen Jiang, co-first author of the study and a post-doctoral scholar in the lab of Zhenan Bao, the K.K. Lee Professor in Chemical Engineering in the Stanford School of Engineering. “But it is not a passive tool. It is an active healing device that could transform the standard of care in the treatment of chronic wounds.” 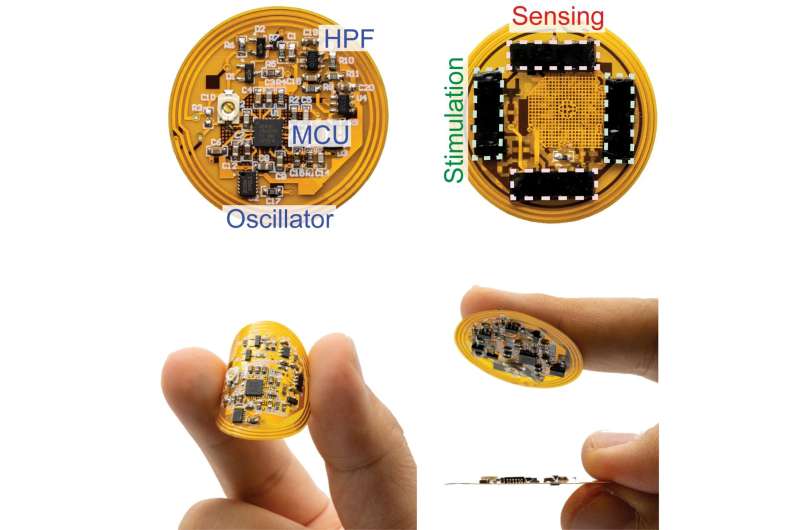 Electrical stimulation, also known as galvanotaxis, has been previously reported to accelerate the migration of keratinocytes to the wound site, limit bacterial infections and prevent the development of biofilms on wound surfaces, to proactively promote tissue growth and help with tissue repair. The researchers were able to take this well-studied technology and integrate it with real-time biosensor data to provide a novel automated treatment modality that is informed by biosensors.

“With stimulation and sensing in one device, the smart bandage speeds healing, but it also keeps track as the wound is improving,” says Artem Trotsyuk, likewise a co-first author of the study who completed his graduate work in the lab of Geoffrey Gurtner, MD, formerly the Johnson & Johnson Distinguished Professor of Surgery (Emeritus) in the Stanford School of Medicine, and currently the Chair of the Department of Surgery and Professor of Biomedical Engineering at the University of Arizona in Tucson.

“We think it represents a new modality that will enable new biological discovery and the exploration of previously difficult-to-test hypotheses on the human healing process.”

The researchers took their study a step further, venturing to understand why and how electrical stimulation heals the wound faster. They now believe that electrical stimulation promotes the activation of pro-regenerative genes such as Selenop, an anti-inflammatory gene that has been found to help with pathogen clearance and wound repair, and Apoe, which has been shown to increase muscle and soft tissue growth.

Likewise, electrical stimulation increased the amount of white blood cell populations, namely monocytes and macrophages, through the recruitment of greater amounts of M2 anti-inflammatory macrophages, which have been previously reported as pro-regenerative and playing a key role in the extracellular matrix formation that is required during the proliferative phases of wound healing.

The researchers caution that the smart bandage is, as yet, a proof of concept, albeit a promising one. Many challenges remain, however. These include increasing the size of the device to human scale, reducing cost, and solving long-term data storage issues—all necessary to scale up to mass production should need and opportunity arise.

Likewise, there are potentially new sensors not currently integrated that might be added, such as those that measure metabolites, biomarkers, and pH. And there are some potential roadblocks to clinical use, such as hydrogel rejection, in which the skin may react to the device and create a bad gel-to-skin combination, or biofouling of the sensors, which can cause irritation.

Despite these hurdles, the researchers are pushing ahead and remain optimistic about the potential of their smart bandage to provide hope for patients suffering with chronic wounds.