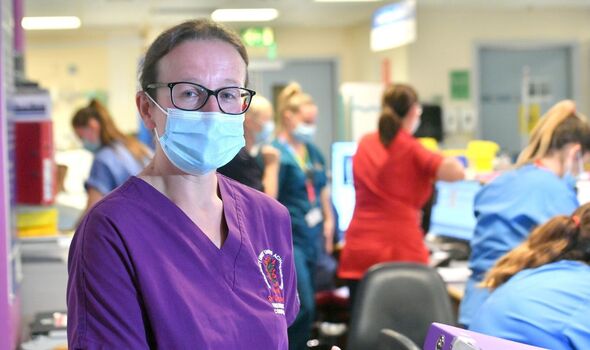 A top doctor has “apologised in many ways” amid the ongoing NHS crisis.

Dr Katja Empson, who has been a consultant in A&E for 14 years, has spoken about how the system is under extreme strain.

She told Wales Online: “I think we should all apologise really in many ways, because we know that we’re not delivering the right level of care often, and we’re not getting it right for people.”

Dr Empson has worked at one of Wales’ busiest hospitals, the University Hospital of Wales in Cardiff, since 2005.

The issues in the Welsh health service are widely known, reviews rogaine foam with Covid most recently contributing to a system under extreme strain.

The two places where this pressure manifests itself most are in A&E and the ambulance service.

Though this is where the pressure is most felt, that does not mean that it is the fault of the staff who work there.

If there is a shortage of GP spots, more people will show up at A&E.

If there are not enough care home beds, the hospitals get full, and A&E cannot admit people.

It is Dr Empson and her staff that feel the brunt of this pressure.

She said: “We know that when somebody wants to go to the GP, they’re often not able to and therefore often finish up in the emergency department and didn’t necessarily want to be here.

“When patients attend they start with an apology, saying ‘I didn’t really want to come here, but I felt there was nowhere else’.

“So we know, we haven’t got things right at the moment and I think in our emergency units, our role really should be to make sure that we signpost those people as effectively as possible to the right place, that we give them what they need if there is an emergency, and then get them to the right place and give them the advice that they need in order to be able to to make better choices.

“I think people should be aware that the pressures in the system are very significant at the moment, and should they need to come to the emergency unit, then they will possibly experience a delay to be seen.

“So we try to keep people as safe as we can within a very complex pressured system and I’d like to offer some assurances to people that we do try to do that.

“People alongside me are working extremely hard, not just day to day to deliver that care. But also to try and make the wider system work more effectively for our patients.”

There has been a real challenge in recent years to recruit and retain staff working in the emergency parts of the health service.

It is not a mystery why. Working long, often unsociable hours, is a hard sell at the best of times, especially when there are vacancies for roles which have far less stress.

However, what is really getting staff down at the moment, is the feeling that they are unable to do their job properly.

“I think it takes a toll on your resilience and your ability to feel good about your work.

“We know that in emergency medicine and sort of urgent areas, the retention of staff in those areas is challenging as a result because there are jobs that we could look to that have more defined time parameters and can control to some extent the demand on those services in a way that we in the emergency unit can’t and don’t, because our doors are open 24/7 and we’ll see patients when they arrive and do the best thing and try and do the right thing for them when they do arrive.

“But, unfortunately, because of delays in our system, those areas become very crowded.

“The doctors, nurses and wider health care providers in those areas are looking after patients in an area that is overcrowded.

“But the wider overcrowding in those areas really impacts on our ability to do that. And that does overwhelm people.

“If that was just one shift out of 10, then it probably wouldn’t have too much of an impact.

“It’s the fact that that pressure is sustained over weeks and months that I think is starting to take a toll on people working in this system.”

Though the Welsh Government has constantly pointed to Covid as the key reason for the issues facing the Welsh NHS.

“hile this has been a big factor, Covid did not take a healthy NHS and make it sick. Issues in emergency medicine well predated Covid.

Wales Online asked Dr Empson if she felt it was fair assessment that there had been long standing issues.

“I think that’s fair,” she said. “I can only talk for Cardiff and Vale over the last 10 years or so as it’s the only place where I’ve practised emergency medicine.

“We’ve always been trying to sort of catch up on that and provide the resources after the work has arrived, if you see what I mean?

“But we were doing well in Cardiff and Vale in terms of how we were managing our emergency medicine stream, we would generally perform really well.

“We would generally see people in a timely fashion and the experience of patients as they move through the system was acceptable.

“There were obviously some delays and not every patient would have a great experience but things were better.

“I think since Covid there has been a step change, it has simply been much more difficult to ensure people are moving through the system safely.

“The complexities around infection control with people have been challenging.

“For example, over the last few months people presenting with a fever.

“And all of those patients need a separate environment in the hospital and the place where they get delayed, while all of that is worked out is in the emergency unit.

“We’ve also seen problems with staffing. So the retention and recruitment of staff has become difficult but also coping with acute illness in the workforce.

“We now have higher numbers of patients who are awaiting social care, or some other sort of package of support to be able to be discharged, those numbers are higher than ever.

“And because of that, things feel significantly harder at the moment for us in the emergency streams and it is certainly harder than I’ve ever known it and in the last five or six years.”

That issue of social care is the big problem facing A&E.

People who should really be being cared for in the community are currently in hospital beds due to a lack of discharge options.

This prevents the ER from bringing people into the hospital and that contributes to the long waits.

“So, in a perfect world, when a patient arrives in an ambulance we would bring them straight into the emergency unit and start their treatment,” said Dr Empson.

“Unfortunately, we’re not currently working in a perfect situation.

“Our hospital is full so the emergency unit patients can’t get into the hospital.”

Cardiff and Vale has taken some significant steps to try to alleviate the pressures in A&E.

A key part has been accepting that the pressure in the ER is not just the responsibility of people in that part of the hospital, but the hospital as a whole.

Other departments have been tasked with taking on more of the strain, and while this has made things tougher in other parts of the hospital, it has made a significant dent in the A&E waiting times.

This can be seen in the huge drop in the number of ambulances waiting outside of UHW.

If two people were to present with exactly the same symptoms and the exact same levels of urgency, but one came on an ambulance and another self presented, the person on the ambulance will be prioritised because that frees up those paramedics to go back out into the community.

However these two groups wait in different parts of the emergency department which means many self presenters are not aware of the additional pressures elsewhere.

Katja said: “We’ve made some significant changes in how we’re able to manage the ambulance delays, and support our Welsh ambulance colleagues and community.

“The people that self present to the emergency unit can experience long delays waiting in a very crowded environment to be seen, either by a doctor, and then after they’ve been seen to be admitted to the wards.

“That’s because we have to make some compromises in terms of how we balance the risk.

“And the compromise is usually felt in that presenters area, where patients will sometimes have to wait for an unacceptable length of time, in order to be able to access a bed.

“Working in that environment then becomes very difficult. Because people understandably, are impatient, are often uncomfortable and we know we’re not delivering the best care to people.”

The final question Wales Online put to her is how confident she is that in three years time things will be better.

“Who knows what what’s around the corner, who knows we might have another global pandemic or something will change, but I’m sure I’ll still be here working very hard to make sure our patients are looked after.”