A cost-saving, stepwise approach to treating diabetic macular edema was as effective and at least as safe as what’s been the standard approach, which jumps straight to the costlier treatment, in a head-to-head, multicenter, US randomized trial of the two regimens that included 312 eyes in 270 adults with type 1 or type 2 diabetes.

The findings validate a treatment regimen for diabetic macular edema that’s already common in US practice based on requirements by many health insurance providers because of the money it saves.

These new findings build on a 2016 study that compared aflibercept monotherapy with bevacizumab monotherapy and showed that after 2 years of treatment aflibercept produced clearly better outcomes.

The new trial findings “are particularly relevant given the increasing frequency of insurers mandating step therapy with bevacizumab before the use of other drugs” such as aflibercept, noted Chirag D. Jhaveri, MD, and colleagues in the study published online July 14 in the New England Journal of Medicine.

Jhaveri, a retina surgeon in Austin, Texas, and associates note that based on Medicare reimbursement rates of $1,830 for a single dose of aflibercept and $70 for one dose of bevacizumab starting treatment with bevacizumab could produce “substantial cost reductions for the healthcare system.”

The authors of an accompanying editorial agree. Step therapy that starts with bevacizumab would probably result in “substantial” cost savings, and the findings document “similar outcomes” from the two tested regimens based on improvements in visual acuity and changes in the thickness measurement of the central retina during the 2-year trial, write David C. Musch, PhD, and Emily Y. Chew, MD.

Musch, a professor and ophthalmology epidemiologist at the University of Michigan in Ann Arbor, and Chew, director of the Division of Epidemiology and Clinical Applications at the National Eye Institute in Bethesda, Maryland, also laud the “rigorous” study for its design and conduct that was “beyond reproach,” and for producing evidence that “applies well to clinical practice.”

The only potential drawback to the step-therapy approach, they write, is that people with diabetes often have “numerous coexisting conditions that make it more difficult for them to adhere to frequent follow-up visits,” a key element of the tested step-care protocol, which mandated follow-up visits every 4 weeks during the first year and every 4-16 weeks during the second year. 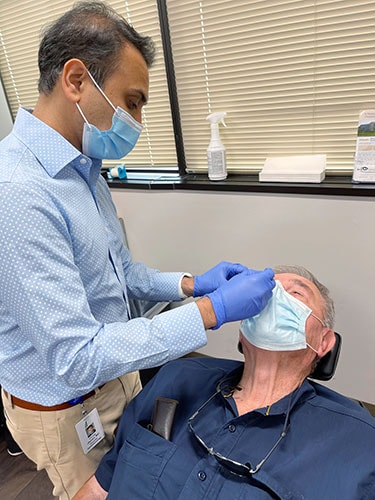 Jhaveri caring for a patient

The new trial, organized by the DRCR Retinal Network and the Jaeb Center for Health Research in Tampa, Florida, ran at 54 US sites from December 2017 to November 2019. The study randomized 158 eyes in 137 patients to aflibercept monotherapy, and 154 eyes in 133 patients to the step-care regimen (both eyes were treated in several patients in each group, with each eye receiving a different regimen). Participants were around 60 years old, 48% were women, and 95% had type 2 diabetes.

To be eligible for enrollment, patients had at least one eye with a best-corrected visual-acuity letter score of 24-69 on an Electronic Early Treatment Diabetic Retinopathy Study chart (which ranges from 0-100, with higher values indicating better visual acuity), which corresponds to Snellen chart values of 20/320-20/50, readings that encompass most patients with diabetic macular edema, noted study authors Adam R. Glassman and Jennifer K. Sun, MD, in an interview.

“Very few patients with diabetic macular edema have vision due to this alone that is worse than 20/320, which meets criteria for legal blindness,” said Glassman, who is executive director of the Jaeb Center for Health Research, and Sun, who is chief of the Center for Clinical Eye Research and Trials at the Joslin Diabetes Center in Boston, Massachusetts, and chair of the DRCR Retinal Network.

The bevacizumab-first group also showed at least comparable if not better safety, with similar rates of prespecified ocular events in both groups, but with a significantly lower rate of serious systemic adverse events, which occurred in 52% of the eyes treated with aflibercept only and 36% of eyes that began treatment on bevacizumab. Serious systemic adverse events occurred in 43% of patients who had two eyes treated as part of the trial.

The team that designed the trial opted for a superiority design rather than a noninferiority trial and powered the study based on the presumption that aflibercept monotherapy would prove superior, said Glassman and Sun. “We feel that the clinical interpretation of these results will be similar to the interpretation if we had conducted a noninferiority study, and we found that bevacizumab first was noninferior to aflibercept monotherapy,” they maintained in an interview.

Glassman and Sun said they and their coauthors are now analyzing the results to try to find patient characteristics that could identify eyes most likely to respond to the bevacizumab-first approach. “It would be clinically valuable” to use the results to identify characteristics that could help guide clinicians’ treatment approach and enhance patient counseling, they said.

The study received funding from the National Institutes of Health. Jhaveri has reported being a consultant for Genentech, Novartis, and Regenxbio. Glassman has reported receiving grants from Genentech and Regeneron. Sun has reported receiving grants from Boehringer Ingelheim, Janssen Biotech, KalVista, Optovue, and Physical Sciences, grants and travel support from Novartis and Novo Nordisk, travel support from Merck, writing support from Genentech, and equipment supplied by Adaptive Sensory and Boston Micromachines. Musch and Chew have reported no relevant financial relationships.

Mitchel L. Zoler is a reporter for Medscape and MDedge based in the Philadelphia area. @mitchelzoler