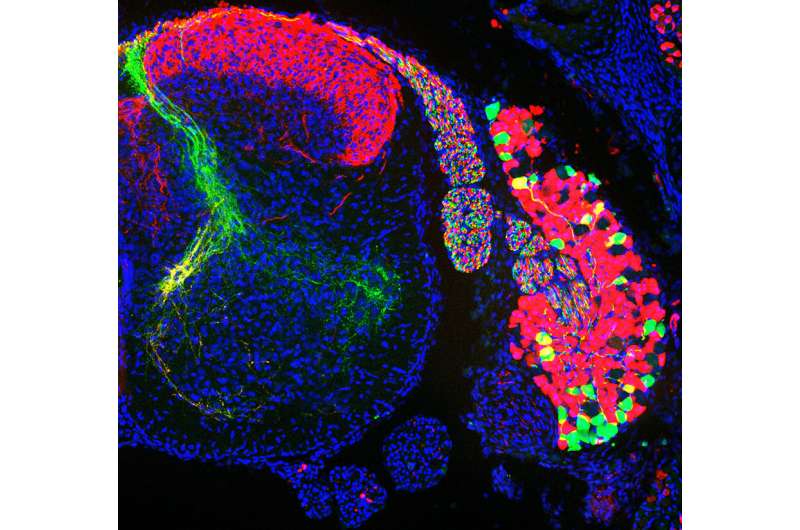 To perform coordinated movements, we rely on special sensory neurons in our muscles and joints. Without them, the brain wouldn’t know what the rest of our body was doing. A team led by Niccolò Zampieri has studied their molecular markers to better understand how they work and describes the results in Nature Communications.

Sight, hearing, smell, glucotrol dailymed taste, touch: We’re all familiar with the five senses that allow us to experience our surroundings.

Equally important but much less well known is the sixth sense: “Its job is to collect information from the muscles and joints about our movements, our posture and our position in space, and then pass that on to our central nervous system,” says Dr. Niccolò Zampieri, head of the Development and Function of Neural Circuits Lab at the Max Delbrück Center in Berlin. “This sense, known as proprioception, is what allows the central nervous system to send the right signals through motor neurons to muscles so that we can perform a specific movement.”

This sixth sense—which, unlike the other five, is entirely unconscious—is what stops us from falling over in the dark, and what allows us to raise a cup of coffee to our mouth with our eyes shut in the morning.

But that’s not all: “People without proprioception can’t actually perform coordinated movements,” says Zampieri. He and his team have now published an article in which they describe the molecular markers of the cells involved in this sixth sense. The findings should help researchers to better understand how proprioceptive sensory neurons (pSN) work.

The pSN cell bodies are located in the dorsal root ganglia of the spinal cord. They are connected via long nerve fibers to the muscle spindles and Golgi tendon organs that constantly register stretch and tension in every muscle of the body. The pSN send this information to the central nervous system, where it is used to control motor neuron activity so that we can perform movements.

“One prerequisite for this is that pSN precisely connect to different muscles in our bodies,” says Dr. Stephan Dietrich, a member of Zampieri’s lab. However, almost nothing was known about the molecular programs that enable these precise connections and lend the muscle-specific pSN their unique identity. “That’s why we used our study to look for molecular markers that differentiate the pSN for the abdominal, back and limb muscles in mice,” says Dietrich, lead author of the study, which was carried out at the Max Delbrück Center.

Using single-cell sequencing, the team investigated which genes in the pSN of the abdominal, back and leg muscles are read and translated into RNA. “And we did find characteristic genes for the pSN connected to each muscle group,” says Dietrich. “We also showed that these genes are already active at the embryonic stage and remain active for at least a while after birth.” Dietrich explains that this means there are fixed genetic programs that decide whether a proprioceptor will innervate the abdominal, back or limb muscles.

Among their findings, the Berlin researchers identified several genes for ephrins and their receptors. “We know that these proteins are involved in guiding nascent nerve fibers to their target during development of the nervous system,” says Dietrich. The team found that the connections between the proprioceptors and the rear leg muscles were impaired in mice that can’t produce ephrin-A5.

One aim is better neuroprostheses

“The markers we identified should now help us further investigate the development and function of individual muscle-specific sensory networks,” says Dietrich. “With optogenetics, for instance, we can use light to turn proprioceptors on and off, either individually or in groups. This will allow us to reveal their specific role in our sixth sense,” adds Zampieri.

This knowledge should eventually benefit patients, such as those with spinal cord injuries. “Once we better understand the details of proprioception, we’ll be able to optimize the design of neuroprostheses, which take over motor or sensory abilities that have been impaired by an injury,” says Zampieri.

He adds that researchers in Israel have recently discovered that properly functioning proprioception is also important for a healthy skeleton. Scoliosis, for instance, is a condition that sometimes develops during growth in childhood and causes the spine to become crooked and twisted. “We suspect this is caused by dysfunctional proprioception, which alters the muscle tension in the back and distorts the spine,” says Zampieri.

Hip dysplasia, an abnormality of the hip joint, might also be caused by faulty proprioception. This has led Zampieri to envision another outcome of the research: “If we can better understand our sixth sense, it will be possible to develop novel therapies that effectively counteract these and other types of skeletal damage.”