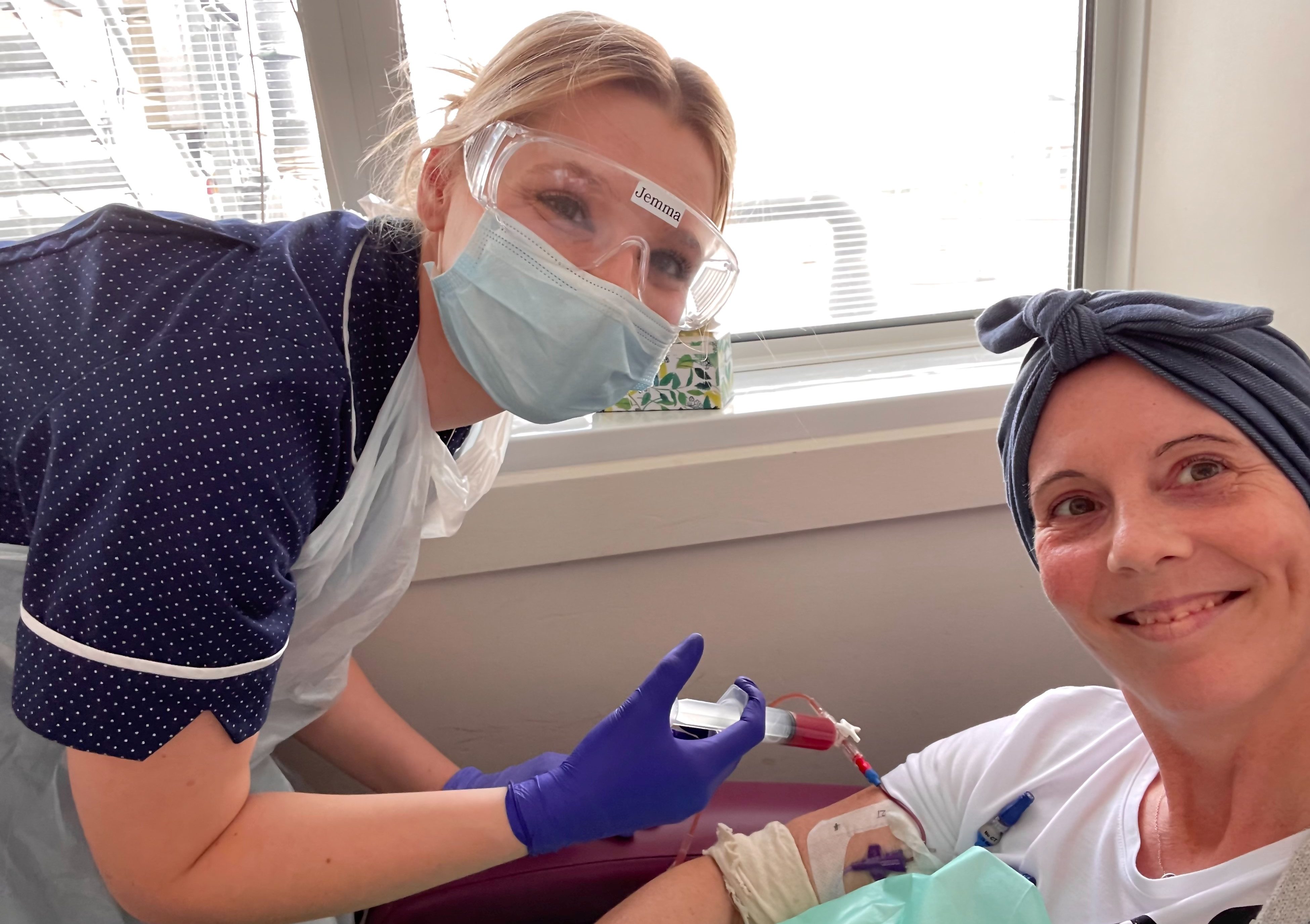 At Christmas 2020, I received the dreaded ping from the Test and Trace App and was told to isolate myself as I’d apparently come into contact with someone who had tested positive for Covid.

I was gutted. I love Christmas and had been looking forward to spending time with my family.

At that time, you weren’t required to test if you didn’t have symptoms. As I didn’t have any, I assumed I’d been lucky.

However, over the next month, sta je bolje cialis ili viagra I started getting banging headaches. I couldn’t catch my breath after walking upstairs, and heard what sounded like a heartbeat in my head when I was trying to sleep. I felt extremely fatigued and struggled to concentrate at work.

Assuming I had caught Covid, I took a PCR test, which came back negative. Soon after, I started to feel pressure in my sinuses. My nose felt blocked, and I felt dizzy.

Thinking I may still have the virus, or was suffering from long Covid, I booked an appointment with my GP, who prescribed antibiotics for a suspected sinus infection

I was working mostly from home at this point and so timed in the naps I needed and, although I managed to function, I didn’t feel like I was performing my best.

I booked another call with my GP who sent me for blood tests.

Two hours after the tests, the surgery called to tell me I had to go to A&E immediately as there was something wrong with my blood counts and I needed a blood transfusion.

Despite my initial alarm, I rationalised that it couldn’t be that bad and that I would be OK.

That was until a doctor explained that they suspected I had leukaemia. It was a complete shock and I thought it was weird as I’d generally associated the disease with younger people. I now know it can affect anyone of any age.

That night, I was admitted to hospital in an isolated room and called my mum, dad, and brother.

It was one of the most difficult conversations I’ve ever had. I was still in denial and didn’t want to worry them unnecessarily, but realised that I should let them know something was wrong.

The next day, less than one month after starting to feel ill, the doctor confirmed my diagnosis, Acute Myeloid Leukaemia (AML), an aggressive blood cancer.

My world came crashing down around me but my friends and family reassured me that I wasn’t alone.

A fortnight later, I was admitted to The Royal Marsden in Sutton where I started 10 days of intensive chemotherapy.

I initially tolerated it well, but after the treatment had finished, things became much tougher as my blood counts dropped and I began to feel extremely weak and drained.

One of the worst side effects from the treatment was fatigue. It was overwhelming – like jet lag, the flu, and a hangover all at once. At the same time, I was regularly picking up infections due to being immunocompromised.

I ended up being in hospital for a month in protective isolation at the height of the pandemic, so the only people I saw during that time were ward staff and doctors.

It was difficult not having my friends and family close, having kept up with them mainly through phone calls and texts, as I didn’t want them to see me in a hospital room.

One night I had a video call with a group of friends. It was lovely but quite emotional. I missed them, and seeing them made me feel even more alone and socially isolated.

It was the first time I’d realised that I could die, I was only 44, so it was a really tough reality check

It was amazing when I was finally allowed home after the first round of chemo. Despite feeling weak from the treatment, I was looking forward to having more space to move around and to see my parents.

Some of my friends had also renovated some of my garden as a surprise while I was in hospital, which was pretty special to return to!

Fortunately, I was able to have part of my second cycle of chemotherapy at home – my parents took it in turns to look after me.

I had a pump that administered the chemotherapy as well as a saline flush, which helps and prevents blockages. I was connected to this for eight days, 24 hours a day, and carried it around in a rucksack.

Although much better than being in hospital, it was quite cumbersome, especially when taking showers and sleeping.

Unfortunately, despite the treatment, doctors told me about three months after starting treatment that there was still a small amount of leukaemia left, so I would need a stem cell transplant.

This involves having treatment to get rid of any remaining abnormal cells then replacing your blood stem cells with new, healthy cells from a suitable donor.

In some ways, this was harder to hear than my initial diagnosis. I’d been so positive and focused on the fact that chemotherapy would work, so it was a blow to be told otherwise.

It was the first time I’d realised that I could die, I was only 44, so it was a really tough reality check.

Before I could start the stem cell process, I required two further rounds of lower dose chemotherapy at home, which were taken as tablets and self-medicated injections. I had more energy than before and was able to go hiking, and meet friends and family outdoors. I didn’t really speak to them about how I had felt during this time as I wasn’t ready for conversations about mortality.

The hospital started looking for a donor on the stem cell register following the second cycle of chemo and amazingly, three months later, a 100% match was found in Germany.

I was grateful and excited, but also a little nervous, as I knew the risks of serious complications associated with the treatment such as graft versus host disease, where the donated cells attack your own body cells, as well as rejection, infertility, and infections.

The actual donation lasted about 30 minutes, with a nurse administering the cells using a syringe.

A few days later, the effects of my pre-treatment chemotherapy started to hit, and I felt fatigued, lethargic, sick, and totally lost my appetite. However, my blood counts recovered and was soon allowed home.

Recovering from a stem cell transplant is long and, even after six months, it’s still early days. I’m currently in remission and on the whole, feel relieved, positive, extremely happy, and grateful for this new chance of life.

While I enjoy popping into shops, picking up coffees and having lunch outside, some things are still too risky – like meeting friends indoors, going for a meal, to a gig or the gym.

I crave my old lifestyle, which was sociable, and full of activity and I miss travelling, which is one of my passions. However, I know these things will return and every day is a step closer.

Despite this, I’ve learned to appreciate slowing down and finding peace in my own company.

It has also made working out how to do a phased return to work more difficult. I’m extremely lucky that the company I work for is so supportive, though.

I’ve had three of my primary Covid jabs, so my immune system should soon be functioning more effectively, letting me feel more comfortable about doing more.

Now, a lot of the emotional impact is starting to take hold so I am doing things like spending time in nature, having counselling and exercising to help manage this, while opening up to friends and family about my journey.

However, the risk of relapse does hang over me, but I believe this fear is normal. I tell myself that it’ll get easier.

Donating stem cells is a relatively simple and unobtrusive procedure, which can potentially save a life – I find it really shocking that only 2% of people in the UK are registered as donors and hope I can inspire more people to sign up.

As the Royal Marsden is a world class research centre, I’m also on a clinical trial called Amadeus. This is a blind trial for a chemotherapy tablet that will hopefully reduce the risk of relapse for AML patients.

I’m feeling positive about my future and looking at it as an opportunity to recalibrate. I’m getting healthier and stronger everyday – keeping active with lots of hiking, walking and yoga.

All of this has set me up for The Banham Marsden March this month, which is a 15-mile sponsored walk from Chelsea to Sutton between the two Royal Marsden sites.

I am looking forward to my ‘new normal’ and although I’m not 100% certain what that looks like yet, I’m excited to find out. One thing I am certain of is that my cancer may have altered my life, but it will not define me.

You can find out more about Liz’s fundraising challenge, The Banham Marsden March, on The Royal Marsden Cancer Charity’s website or sign up to complete your own challenge here: