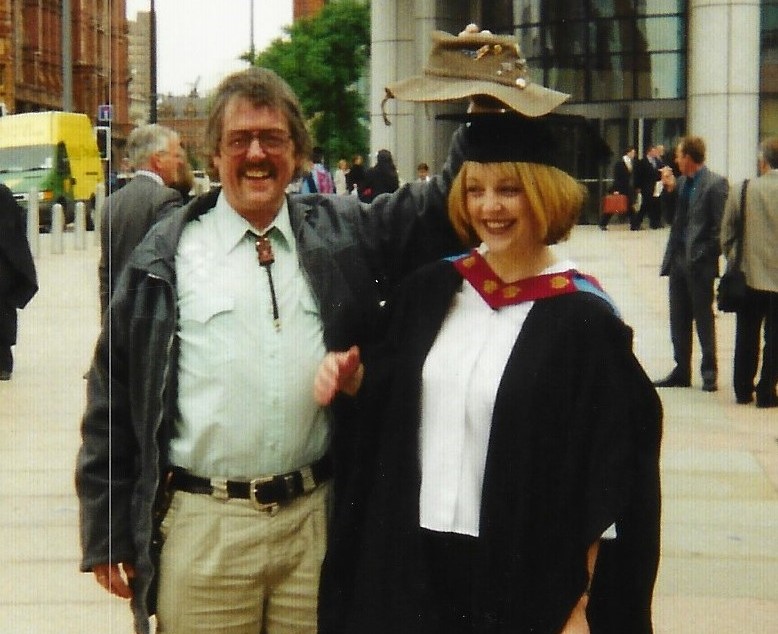 ‘You need to come to the hospital because your dad isn’t well, we will meet you there,’ my mum said to me over the phone while I was at university in 2001.

I found my older sister – who also went to Manchester Metropolitan University – and we raced to the hospital. Strange as this may seem, we were laughing and joking most of the way there that he’d probably fallen drunk and banged his head. He had experienced a few drunken scrapes before so we weren’t unusually worried.

When we got there an hour later though, the news that he might not live through the next 48 hours rocked us both into silence. The doctor told us my dad hadburst the blood vessels in his food pipe and was vomiting huge amounts of blood as a result of high blood pressure and liver damage from alcohol.

This was the first time I realised how serious alcohol was affecting my dad’s health and I was afraid for him – and it’s a huge reason why I’m now motivated to stay sober.

After we first arrived at that hospital and were told we might lose our father, we were stunned, aura soma flasche 91 felt guilty for laughing about it and obviously very worried. My dad had never even had a single health warning so this was a shock.

Even though he was a heavy drinker and we would nag him to cut down, medical professionals had never asked him to stop drinking – he appeared to be pretty healthy.

The next 48 hours were very worrying, my dad underwent several blood transfusions and was unconscious for the majority of the time. We were told he had lost a lot of blood, which was alcohol-related. I was so scared because he didn’t look alive anymore.

Some time in the afternoon on the second day, he woke up and he declared he would never drink again. My dad was a very strong person and when he said something, he usually meant it and carried it through.

He was diagnosed with cirrhosis – which is where the cells of the liver start to degrade and the liver becomes thickened and inflamed – due to chronic and prolonged alcohol damage and diabetes type two, which could be controlled by diet. He would be OK if he didn’t drink and he’d have a good chance of surviving two to five years and living a high-quality life.

Even though he was only given five years to live, we felt this was a lucky escape and a chance to make the most of things. We were scared though, what if he drank again?

Alcohol has always been a huge feature in my life. When I was born, I was brought back from the hospital to be shown around the bar of my grandparents’ pub and spent time there most days. My parents ran establishments with alcohol and when I was old enough, I worked behind the bar of several local pubs.

Drinking was just what everyone I knew did. It was the only way I knew how to socialise and it looked fun. My dad was a musician so when not working in the pub, he would be out entertaining in similar venues.

From as far back as I can remember, he would let me go with him to gigs on Friday and Saturday nights. Some of the club managers would make me sit in the dressing room but I would have crisps and lemonade and loved hearing him sing and play his guitar. Others would let me sit in the club and I’d play bingo or even dance the night away.

When I got to 18 and was old enough to drink legally, it was strange because I had already been allowed to have wine with my meal at home and the odd lager shandy – so it didn’t feel like a big deal. Plus, I had been drinking cider and alcopops on the street with my friends most weekends for years.

I had the characteristics of a binge drinker from very early on and that is how my entire drinking career panned out. Drink lots in a short space of time, have an awful hangover, recover and do it again but be productive, functional, hard-working and sensible all week.

My drinking didn’t look anything like my dad’s drinking though. My opinion at the time was that he drank like an alcoholic – from noon when the pubs opened until closing most nights – whereas I only drank at weekends. I didn’t ever imagine my dad would stop drinking but he did.

I think at the beginning, my dad found it quite hard. His social life, work life and hobbies revolved around pub life, but he never complained.  He continued with his music – even recording songs on Music Row in Nashville – and appeared on the radio and TV out there too.

He really was living his best life and I was incredibly proud of him. It felt like a huge relief that he was no longer drinking and I could see him reaching his potential every single day – he was learning new things, going to places he wanted to go and he had patience and ambition again. He lived every day like it was his last on Earth because he knew it might be.

I always had a good relationship with my dad – people said I was the ‘apple of his eye’ – but this just became stronger and closer without alcohol playing a part. The only thing that changed was that we didn’t drink in his house out of respect for what he was doing.

In 2008, I moved out to Cyprus for 12 months and my parents came too for a few months. It was then that he started to decline. He was admitted to hospital twice in Cyprus with complications with his diabetes and he felt generally unwell. No one said he was coming to the end of his life but I believe he knew.

My dad just seemed weaker somehow, more irritable, tired and he struggled to sing and play his guitar. I can’t use the language he used but he labelled himself as ‘done for’ and they returned home late winter.

A few months later, I went home to visit and my dad had visibly deteriorated. His voice sounded strange and he was weary. He was only 63. When I left him to go back to Cyprus for my final term there, he told me our hug might be ‘the last hug’ I’d get. I didn’t believe it.

The day after I returned to Cyprus – almost 10 years after he first went into hospital – my mum called to tell me my dad had died of a heart attack. I fell to my knees and sobbed like a baby.

I was devastated and felt robbed of this clever, funny, loving and intelligent man, stolen too soon because of a very legal yet very dangerous drug – alcohol.

Twelve years on and I no longer drink alcohol. I never hit a rock bottom or became unwell but I did have a problem with alcohol as it was my coping mechanism through every bad thing. Like grieving the loss of my dad, and even the smaller things like having a stressful week at work.

I am now two and a half years sober and will never go back after experiencing a traumatic miscarriage in October 2018 and my drinking took a bit of a spiral. It became heavier and a bit more frequent.

I was off work with diagnosed depression and anxiety and felt at an all-time low in my life. My lifelong best friend, Lisa Elsworth, had been a year sober for her own reasons and I knew she felt better than she ever had.

She encouraged me to take a short 30-day break to see how I felt and within a very short space of time, I realised drinking was making things worse, not better. It was tricky at first, but the best decision I have ever made.

I feel amazing now. My sleeping is great, and I have also co-founded – with Lisa – an incredible community called Bee Sober, which helps other people to get and stay sober, as well as make friends along the way.

Our organisation is now my driving force for living a sober lifestyle. I wish I had got sober sooner to share this with my dad and I feel prouder than ever of what he achieved during his last 10 years.

So much has changed since I got sober and although life still throws you a curve ball (I actually had a second miscarriage within my first year of stopping drinking), I deal with things so much better.

I have new healthier coping mechanisms and I am excited to wake up in the morning. Bee Sober is growing and this means we get to help people make friends and get support on their own journey, which is something I would never have been able to achieve if I was still drinking.

I love my life and can only see it getting better from hereon in.