Will Greggs’ fake meat festive bakes be a hit with customers like the chain’s pioneering ‘plant-based’ sausage roll in 2019? The Mail on Sunday’s BARNEY CALMAN and EVE SIMMONS provide their verdict on the bakery’s latest vegan offering

‘Nobody was waiting for a vegan b****y sausage, you PC-ravaged clowns!’

So said the infamous tweet from Piers Morgan, reacting to the news back in January 2019 that high street bakery Greggs was launching a ‘plant-based’ sausage roll.

He couldn’t have been more wrong. The Quorn-and-puff- pastry offering quickly became one of Greggs’ bestsellers, responsible for a 14 per cent rise in profits that year.

It was also something of a watershed moment.

Until then, amoxicillin sodium sterile ppts fake meat products were fairly niche – The Mail on Sunday was among the first to report on the new wave of vegan ‘beef’ burgers that looked, smelled, tasted, and even ‘bled’ like the real thing, but were made from soya or pea protein textured mince.

Yes, they were plant-based, but as one writer put it, about as natural as a tin of Dulux emulsion. Despite this, they’ve been unfailingly popular.

But for Newcastle-based bakery chain Greggs, which has more than 2,000 outlets, a vegan offering was a bold move. It paid off, and spawned a raft of copycats.

About three per cent of Britons are vegan, never eating meat or dairy. But more than a third of Britons say they are trying to cut their meat intake in an effort to eat more healthily, and these foods are aimed at them.

So is a vegan sausage roll healthier than the real thing? Not really.

Each contains half a teaspoon of salt – a third of the daily recommended limit – and more fat than a Big Mac.

Last week, perhaps hoping to repeat the success of the vegan sausage roll, Greggs unveiled the Vegan Festive Bake – a fake meat version of its ‘much loved’ Festive Bake. Twitter was divided.

‘Finally tried the Vegan Festive bake and [Greggs] have only gone and absolutely smashed it out the park,’ wrote Paul, a Geordie in London. Not everyone agreed.

On Friday, The Mail on Sunday’s Deputy Health Editor Eve Simmons and I went to a local branch to give our verdict on the taste – and to look into whether you’re doing your health a favour by eating one.

I’m vegetarian and, I have to admit, I’m a bit of a fan of the vegan sausage roll.

When served warm, it does hit that flaky, chewy, fatty, salty spot that real sausage rolls do. (Cold, it’s a bit wooden, sadly.)

But Greggs bakes are an acquired taste.

They all follow a format: a square puff pastry pasty about the size of a large wallet, with filling that resembles a paste, possibly containing chunks of something.

The regular Greggs Festive Bake contains cooked chicken (why not turkey?), stuffing and bacon ‘covered in a creamy sage and cranberry sauce’.

So we could do a side-by-side comparison with the vegan version, I set aside my principles – and we both tried one.

As I suspected, while the pastry was impressively crisp, the filling was rather gloopy. Aside from the chicken chunks, the main flavour was a generic sweetness, provided by the sugary cranberry sauce with the occasional bacon chunk.

I really wasn’t a fan of these, as they seemed a bit odd and fatty.

Despite that, it was weirdly moreish: I ate it all, and Eve, usually disdainful about these things, ate almost all of hers. ‘I was hungry’ was her excuse. 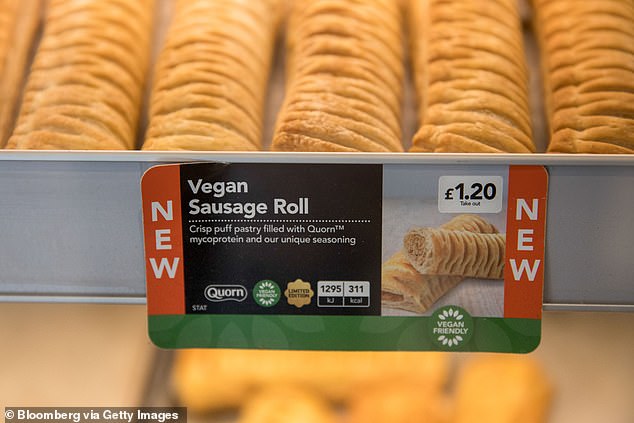 The Quorn-and-puff- pastry offering quickly became one of Greggs’ bestsellers, responsible for a 14 per cent rise in profits that year. It was also something of a watershed moment in 2019

Again, the pastry was great – the butter is replaced with vegetable oils that make it slightly drier and crispier; but for a gloopy Greggs bake, it works perfectly.

It’s possibly better than the butter version, which is rather heavy. But that was for me where the positives ended.

The filling lacked any definition. The main flavour was sage, and I couldn’t make out the Quorn, bar the odd grainy more solid piece within the homogenous paste.

You can get ‘vegan bacon crumbles’ from supermarkets – with an ingredients list as long as your arm – and I am assuming this is what they’ve used.

I’m not a fan of this. ‘Cloying’ is the word that springs to mind.

Eve, a meat-eater, is more upbeat. ‘I quite like it. It’s nice. Sagey and Christmassy,’ she said. Again, despite the blandness, we each finish a pasty. 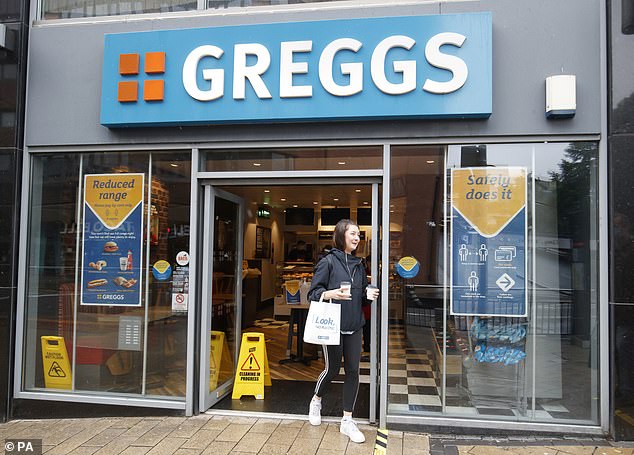 If you’re a Greggs fan who’s gone vegan, this will be just the thing. If you’re buying one as a healthy option, I really wouldn’t bother

Weird Science: The antibiotic that can turn you blue

A man in Australia was admitted to hospital after the whites of his eyes turned blue.

On arrival at Central Coast Local Health District emergency department in New South Wales, the 73-year-old was also found to have blue-tinged skin. 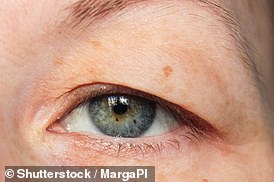 A man in Australia was admitted to hospital after the whites of his eyes turned blue. [File image]

Doctors discovered he had been taking minocycline, an antibiotic that can be used to treat rheumatoid arthritis, for more than a decade.

Studies have found long-term use of the drug can result in skin hyperpigmentation, where patches change colour.

In a report published in the British medical journal Case Reports, clinicians noted that the tinge had not affected the man’s sight or health.

How do they fare nutritionally? A regular Festive Bake contains 453 calories – pretty hefty for a pasty that fits in the palm of your hand.

They advise 400 calories for breakfast and 600 for lunch and dinner. Snacks and drinks make up the rest. Regularly consuming more means you’ll put on weight.

There’s 27g of fat, 14g of which is saturated fat, presumably from the pastry – and a bit more than a Big Mac.

It must be that, as chicken is very low-fat. High-saturated-fat diets are linked to heart disease.

There’s also 4g (a whole teaspoon) of sugar, and 1.7g of salt – equivalent to four-and-a-half packets of Walkers cheese and onion crisps. It’s recommended that adults consume no more than 6g of salt a day.

Higher intakes are linked to raised blood pressure, which can lead to heart attacks and more. There’s 13g of protein, about the same as half a chicken breast.

Was it filling? I’d say so. It’s not a totally fair test, as we both ate a regular and a vegan bake. But after stuffing my face at midday, I felt pretty satisfied until the evening.

How does the vegan bake compare? Not well.

Calorie-wise, it’s roughly the same, but there’s more fat (28g) and almost as much saturated fat (11g) – impressive, given there’s no animal fat.

Where does that saturated fat come from? Quorn, made from ‘mycoprotein’, a fungus, is very low-fat – 2g per 100g overall fat, and just 0.8g of saturates.

Vegan puff pastry is pretty low in saturated fat too. I’d say there was about 50g of pastry – the total weight is 142g, but the filling is very dense – which would mean 12g of fat overall and 6g of saturated fat. Greggs didn’t provide further details on ingredients, so it’s a mystery.

There’s almost as much sugar in the vegan bake, as well as more salt – five-and-a-half packets’ worth of Walkers crisps.

It delivers about 8g of protein, a bit more than in the boiled egg.

If you’re a Greggs fan who’s gone vegan, this will be just the thing. If you’re buying one as a healthy option, I really wouldn’t bother.