The goal is to have as little human intervention as possible.

A fleet of Xpeng P7s is currently driving from Guangzhou, China, to Beijing, on a navigation-assisted autonomous driving expedition. The journey began on March 19th, will conclude on the 26th, and is covering a total distance of 2,284 miles (3,675 km) across six provinces in China.

Xpeng’s goal is to demonstrate the performance of its newly released autonomous driving assistance function called Navigation Guided Pilot (NGP). The system will certainly be fully tested as the plan is to have the vehicles, driven by members of the media and other 3rd parties, use NGP for 1,954 miles (3,145 km) of highway driving. That represents more than 85% of the entire trip from Guangzhou to Beijing.

To put that into perspective, it’s about the same as driving from New York City to Salt Lake City, Utah and having the vehicle drive completely by itself for 85% of the trip. For our European friends, it’s the equivalent of driving from Stockholm, Sweden to Seville, Spain. 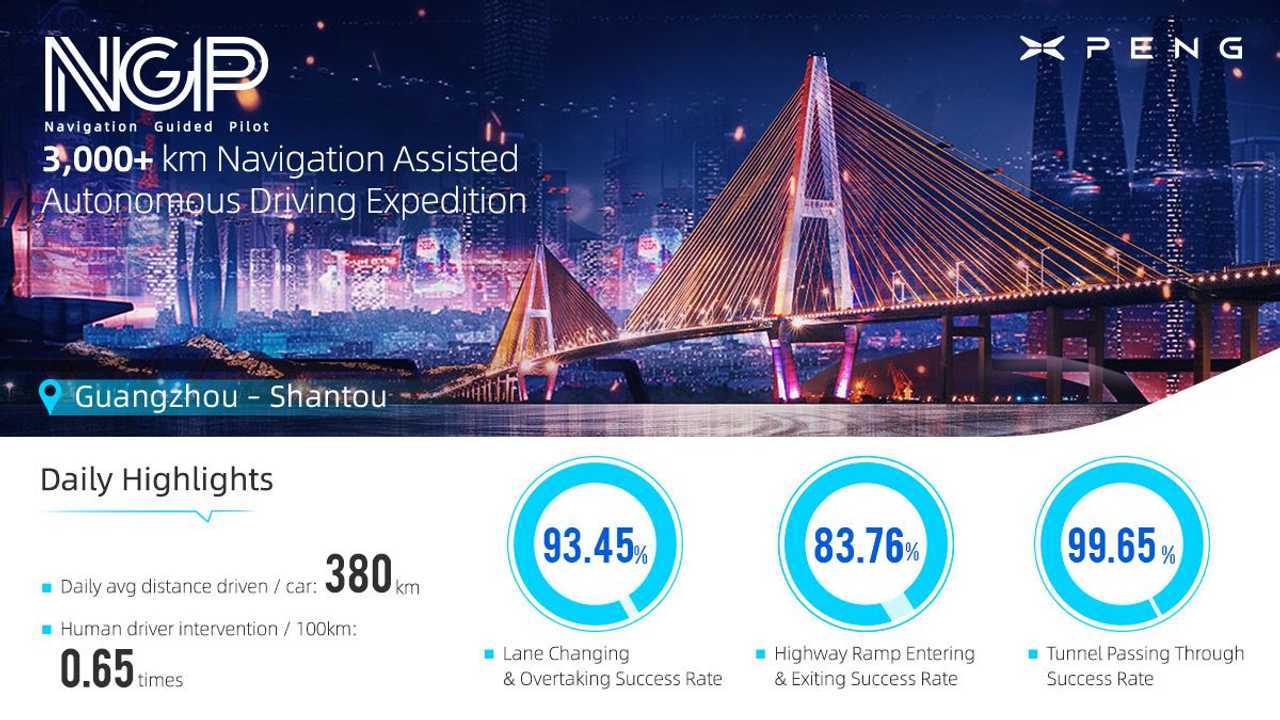 The fleet of P7s will drive across 10 cities in China, starting from XPeng Motors’ hometown of Guangzhou, to Shantou, Quanzhou, Wenzhou, Hangzhou, Shanghai, Nanjing, Qingdao, Jinan, and finish up in China’s second most populated city, Beijing.

Xpeng is releasing the statistics from each day’s event including the average number of human interventions per 62 miles (100 km), the success rates of lane changing, highway ramp entering & exiting, and navigating through tunnels, which are common in China.

On the first day, the vehicles traveled from Guangzhou to Shantou and covered 236 miles (380 km). The fleet was able to drive the 236-mile route with an average of only 1.05 human driver intervention per every 100 miles driven (.65 times every 100 km).

More stats from day one: 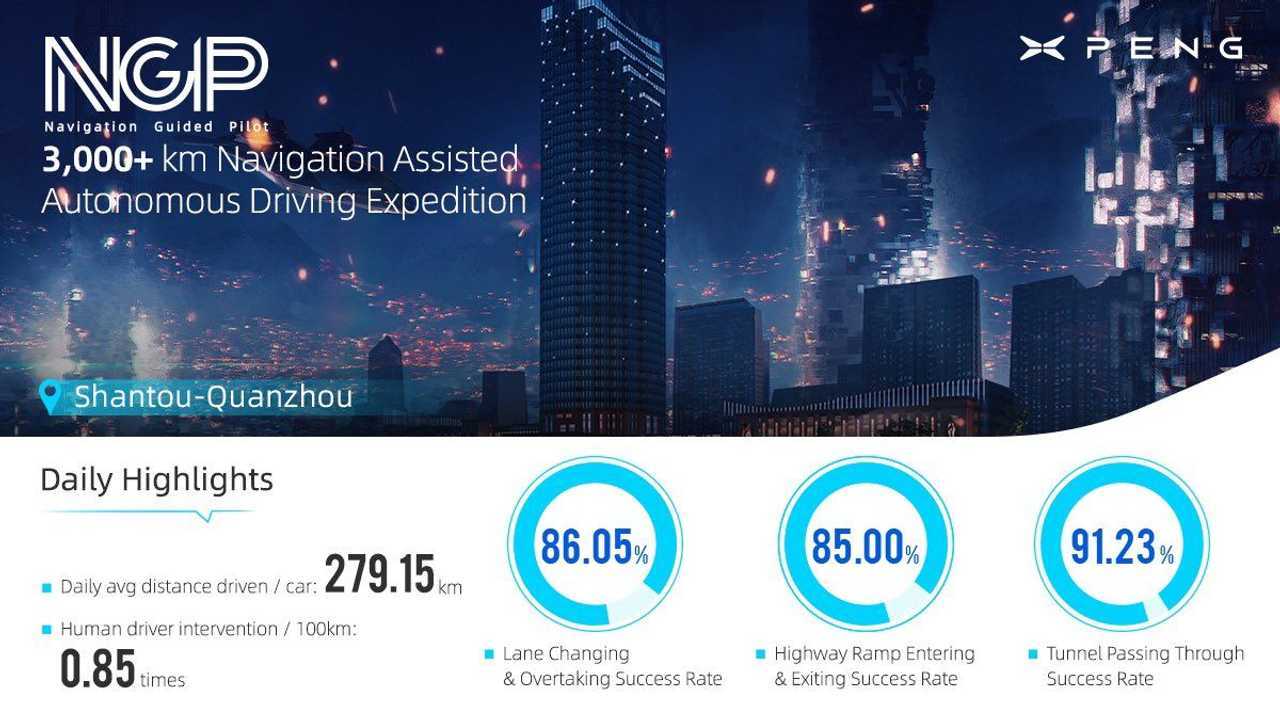 On the second day, the convoy traveled from Shantou to Quanzhou and covered 173 miles (279 km). The fleet was able to drive the route with an average of only 1.37 human driver intervention per every 100 miles driven (.85 times every 100 km).

Xpeng’s XPILOT 3.0’s NGP provides navigation-assisted autonomous driving is a sophisticated suite of advanced driver’s assist systems and can navigate from point A to B, based on the navigation route set by the driver. The system is only available on highways covered by high-precision maps in China, which are actually plentiful. NGP cannot navigate on secondary and tertiary streets that have not been mapped with high-precision.

Since the NGP’s launch on January 26th of this year, over 1 million km (620,000 miles) has been driven under the NGP by XPeng P7 users in China. Like Tesla, Xpeng is developing its own proprietary self-driving software in-house and isn’t relying on a 3rd party suppliers for firmware as most other OEMs do.

However, this week-long journey will really test the system, as independent members of the media are piloting the vehicles and can choose their own routes. Because it’s such a long drive, not every person will drive the entire route, and some of the vehicles will be driven (well, not really driven much) by different journalists each day. This is the longest driving challenge for any autonomous driving assistance system in mass-produced models in China to date.

Join us on Wednesday, March 31st for a live webcast to analyze Xpeng’s cross-country autonomous driving event. We’ll have Mark Andrews, one of the journalists that drove a P7 for one day of the event, along with footage of his drive.

I’ll be on the webcast with Mark and will ask him about his experience, including what he liked and didn’t like about the system. We’ll also have the ability to field questions in real-time from those watching on Facebook and YouTube.

Stay tuned for the rest of the details of this live event, along with the time and how to view the webcast. So start getting your questions ready, we’ll try to answer as many as possible,