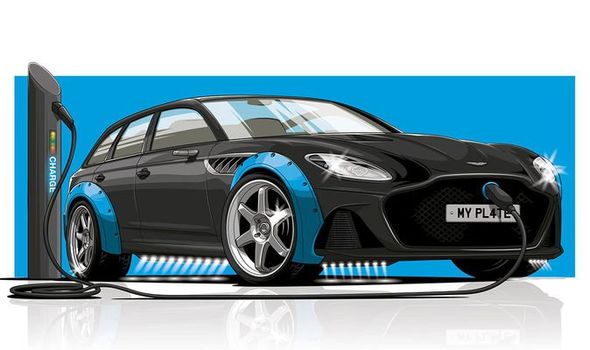 But the rear would be from an Audi RS6 Avant, the ultra-desirable German estate. However, while these two are notorious for loud exhausts and big petrol engines, the dream car, ideally in black, would be a quiet, plug-in hybrid, which can be driven through London without having to pay the Congestion Charge.

Other ideal features would be 18-inch, six-spoke alloy wheels and a panoramic roof – and, like the Audi, it would have four doors rather than the Aston’s two.

BBC Studios commissioned the research ahead of the launch of its Top Gear Motors, Mischief & Mayhem DVD, to find out what the public would look for if they were creating their personal dream car.

In typical Top Gear fashion, there won’t be a caravan in sight, with the ultimate car NOT being fitted with a tow bar.

And despite the choice of any brand in the world, be it Ferrari, Rolls-Royce or Lamborghini, the Britons, surveyed by OnePoll, want the iconic Aston Martin badge on the bonnet.

The DVD re-lives some of the three stars’ most thrilling moments, as they tackle a house-high Wall of Death in their insurance write-offs, while Freddie bungee-jumps off a massive dam in an old Rover Metro.

It also features Top Gear’s epic race between a McLaren Speedtail and fighter jet and the touching tribute to the late rally legend Colin McRae.

BMW Reveals iX Electric SUV: An X5-Sized EV With A 100-Plus kWh Battery

Tesla Model Y: Comprehensive Review | Does It Live Up To All The Hype?