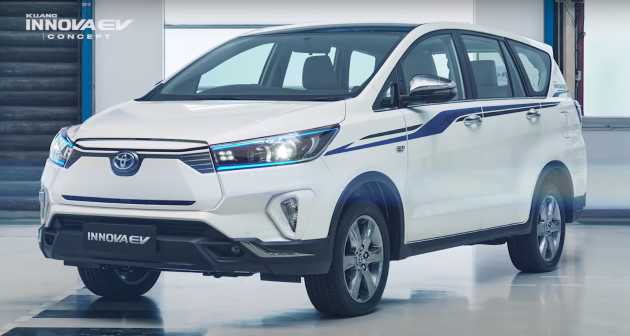 A little over a week ago, Toyota surprised us with the unveiling of the Kijang Innova EV Concept at the Indonesia International Motor Show (IIMS) in Jakarta. It’s an interesting prospect, but don’t hold your breath, because the electric MPV is just an engineering study and won’t enter series production.

Toyota Astra Motor marketing director, Anton Jimmi Suwandy told Autonetmagz: “The Kijang Innova Electric is not a car that we will sell. So this is just a concept and its nature is just for engineering development,” adding that the MPV was being used for R&D to study the viability of such EVs in the region.

Consumer response has been positive too, it seems. Company vice president director Henry Tanoto said the Innova EV Concept has increased the popularity of electric vehicles in the community, even though much of the car’s technical aspects – such as number of electric motors and battery type and size – remain unknown.

As you know, the current Innova rides on Toyota’s trusty IMV ladder frame platform, which is designed primarily to accommodate internal combustion engines. Cramming a fully electric powertrain is a major challenge thanks to the IMV’s long steel members and horizontal arms, making it potentially too costly to be commercially viable.

Another huge factor is the sheer heft of the platform, which when combined with a large battery pack, would create significant penalties to efficiency and range. While the electric Kijang won’t yet see the light of day, the automaker already has plans to introduce more than 10 EVs in Indonesia over the next five years.