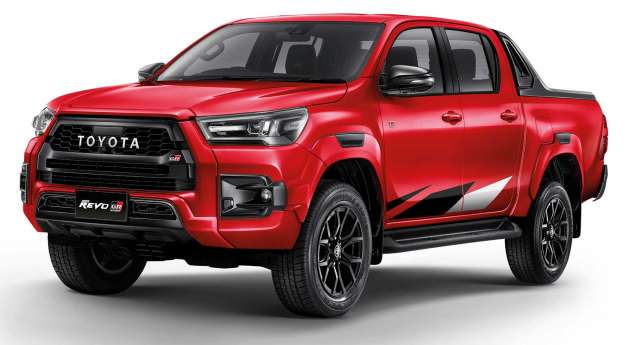 A pricetag of RM16x,xxx is pretty close to the 1,299,000 baht price for the Hilux GR Sport sold in Thailand, which translates to around RM171k at today’s currency rates.

It would make the Hilux GR Sport the most premium variant of the Hilux in Malaysia, slotting in on top of the current range topper Hilux 2.8 Rogue which is priced at RM152,880.

There are many versions of the Hilux GR Sport around the world, but since the photos used in the ads are taken from the Thai model, so we think the Malaysian model would be the same as the Thai model. Makes sense to have the same thing regionally.

The Thai version of the kit paints more of the existing grey body cladding, grille frame and overfenders in body colour for a sportier aesthetic.

There are also versions of the Hilux GR Sport for Europe, Japan, South Africa and Australia. The South African and Australian versions get a power bump to 224 PS and 550 Nm from the 2.8 litre turbodiesel four-cylinder engine’s standard 204 hp and 500 Nm.

The Australian version in particular takes things even further with a revised suspension system, wider track, and gearbox tuning, but less factory mods in exchange for a smaller price premium could also be welcome if the buyer prefers to mod things on his own later on.

Harnessing 1.21 Gigawatts: Enough For A Trip Back To The Future