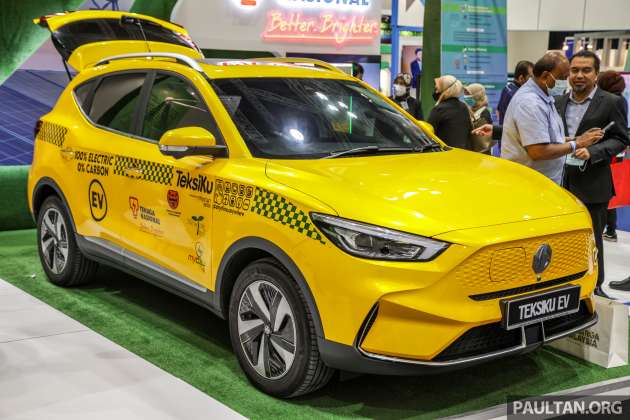 Speaking to paultan.org at the two-day 5th International Sustainable Energy Summit (ISES) 2022 at the Kuala Lumpur Convention Centre yesterday, he said that coverage will initially centre around the Klang Valley as well as Langkawi, which environment and water (KASA) minister Datuk Seri Tuan Ibrahim Tuan Man previously said is one of the starting points earmarked by the government for its push towards electrification.

The service, which will eventually be introduced to other states, will be offered by the company under the TeksiKu banner. Teksiku is an ride-hailing mobile application developed and managed by MySuri, a Cyberjaya-based platform service provider, for taxis and rental cars.

Mohd Noor said that the EV taxis are aimed at transforming the public transport service, and the programme would enable taxi drivers to adopt new technologies without the need to fork out a large investment. He said that the EVs will be made available to drivers under a lease-to-own scheme via the Koperasi Jurupandu TeksiKu cooperative.

The MG ZS EV, an example of which was on show at the event, will form the basis of the initial fleet, but there are intentions to eventually add the BYD e6 (which was spotted in a TeksiKu ad) into the programme. Mohd Noor said a deal for that is still being discussed.

In general, charging infrastructure support in the public domain will be provided by TNB, but Mysuri will also implement a network of chargers for taxi drivers to recharge their vehicles. Incidentally, the EV taxis will all wear the striking yellow exterior, reminiscent of NYC’s cabs, as seen on the display vehicle. Mohd Noor said that this will make the EVs easily identifiable and also differentiate them from regular hired vehicles.

Bookings for the service, when it eventually kicks off, can be made via the TeksiKu app, but the company will also set up electronic kiosks in strategic locations (for example, in airports and stations within the rail network) to enable those without the app to easily secure a ride.

Forza Could Be Affected by Apple vs. Epic Fortnite Battle