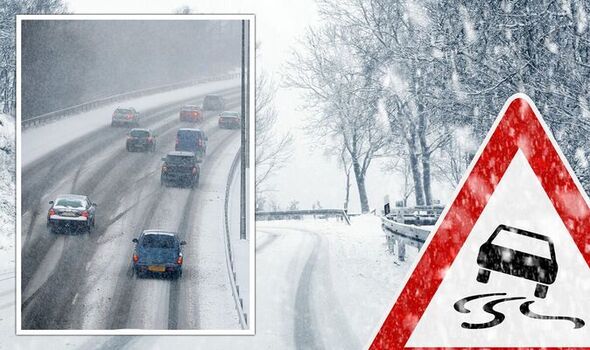 Over 50 percent of road casualties occur at speeds of just 21-30mph, according to experts at Your Red Car. And, with the festive season almost upon drivers, roads and motorways will soon be filled with motorists heading home for Christmas. Whether that means a thirty-minute or three-hour drive, it’s important to remember the rules of the road, especially that some roads can be dangerous.

Whilst it may be tempting to go for a quick drink after work or start journey in the evening to avoid traffic, safety should always come first.

To help motorists stay safe over the festive period, motoring experts identified the country’s safest and most dangerous roads, along with a handy guide to help drivers get home safely this Christmas.

To find the safest and most hazardous areas for drivers, Your Red Car analysed data from the Department for Transport, looking at all casualties on UK roads over the last five years.

The experts then divided this data by local authority area to find the number of casualties in each region.

Scotland and Wales came out on top as the safest regions overall in the UK, with eight out of the 10 local authorities reporting the lowest total numbers of casualties.

Bracknell Forest and Hartlepool were the only English areas to appear in the top 10.

Meanwhile, the South East was found to be the most dangerous region in the UK, with three out of the five local authorities recording the highest number of casualties.

London came out as the safest place in the UK for drivers. In five out of the 10 areas, the lowest numbers of casualties were found in the capital.

The City of London reported the lowest number of accidents, with just 12 casualties involving cars in the past five years.

While London proved to be the safest part of the UK for drivers, nearby Kent is where drivers should travel with the most caution, with 1,687 reported casualties specifically involving cars since 2015 (out of 3,844).

Essex and Surrey followed close behind, with 1,677 and 1,399 reported casualties.

With all of that in mind, the experts also shared their advice on how to drive safely in the run-up to Christmas.

As obvious as it may seem, drinking under the influence of alcohol can massively increase the chances of an accident. Even a small amount can slow reaction times and impair driving skills.

Although it varies from person to person, as a general rule, two pints of regular strength lager or two glasses of wine will put drivers over the limit. The safest bet, however, is not to drink at all. Driving under the influence could land motorists a hefty fine, a driving ban or a prison sentence.

“Drowsy driving” is considered dangerous driving, as motorists are below the minimum standard expected of a competent driver.

Although they may be keen to get home, starting a long journey after work or early in the morning may increase the chances of becoming tired at the wheel. If drivers feel tired while driving, they should stop and take a break at the nearest safe place.

Do not stop on the motorway. Take a short nap if needed, and drink two cups of coffee. It’s also important to stay hydrated on a long journey.

Don’t speed or drive aggressively to get home quicker

Drivers who exceed speed limits are more likely to crash. Although it may feel like they are getting somewhere faster, speeding reduces the driver’s ability to steer correctly and control the car.

It can be infuriating if drivers are in a rush and need to overtake but only ever do so if it is safe. Never overtake on the inside or on bends with low visibility.

Don’t drive if your vehicle is not fit for use

Make sure the car meets regulations before starting the journey. For example, having a brake light out is against the law and puts drivers and fellow road users in danger. Motorists must also make sure their car is insured and taxed before getting behind the wheel.

If drivers are taking presents with them on the journey, they should keep them well hidden if they’re planning a pit stop.

Christmas is a prime time for opportunist thieves who may be looking in car windows.

Even when motorists arrive at their destination, they should remember to take the presents inside. Better safe than sorry.