Japan’s Takuma Miyazono has cemented his place as the world’s best Gran Turismo driver in 2020, by adding the Nations Cup title to his Manufacturer Series and Supra GT Cup crowns.

The first driver to achieve the Nations/Manufacturers double in a single season, Miyazono has gone through 2020 undefeated, winning both the only World Tour that took place this year, in Sydney, and the Asia-Oceania regional final too — as well as the Asia section of the online season! 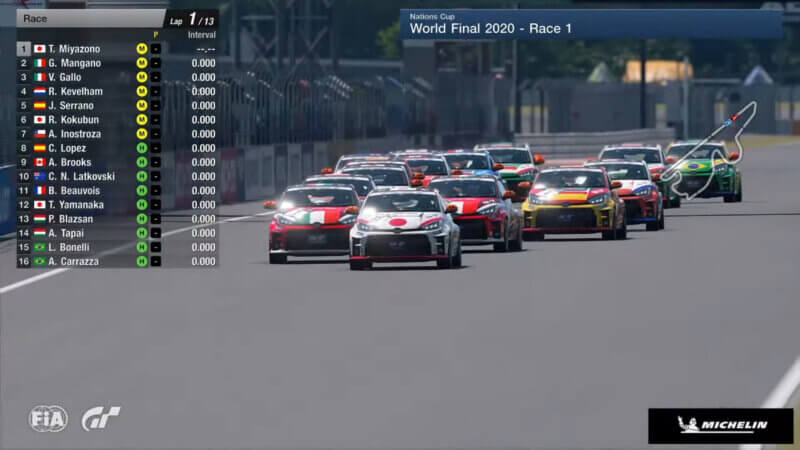 Things didn’t entirely go to plan for Miyazono to start with however. Despite starting from pole position in the first race, using the new Toyota GR Yaris at Fuji Speedway, what looked like a rare tactical error from the favorite resulted in a ninth-place finish.

In the early part of the race, Miyazono was engaged in an entertaining tussle with Italians Valerio Gallo and Giorgio Mangano. The trio was part of a lead pack of seven, all starting on the medium tire and pulling a good gap to Tomoaki Yamanaka as the lead hard-runner.

As expected, the momentum shifted at the race midpoint as the cars swapped over tires but crucially Gallo and Mangano chose to stay out for one extra lap on the mediums. That gave them a mild advantage exiting the pits, with a small gap to Miyazono behind.

Angel Inostroza was an unexpected fly in the ointment. The Chilean made the same error that Igor Fraga made in Paris in 2019, pitting but selecting the wrong new tire grade. That meant he’d need to pit again to pick up the final required tire, but was trying to make up as much time as possible on his second medium set as possible — and that put him up with the Italian cars at the front.

As Miyazono tried to pass the out-of-place Inostroza at the Dunlop Chicane, he found himself on the outside of the track and vulnerable to soft-shod Yamanaka behind. Where Yamanaka went, Serrano and Kevelham soon followed, and Miyazono was shuffled down the pack.

Yamanaka looked dead-set to overhaul Mangano and Gallo, but a robust defense at Dunlop from the former saw the Japanese driver also shuffled down the order as the train behind him took advantage of the lost tenths. Gallo took the win from Mangano, with Serrano in third. 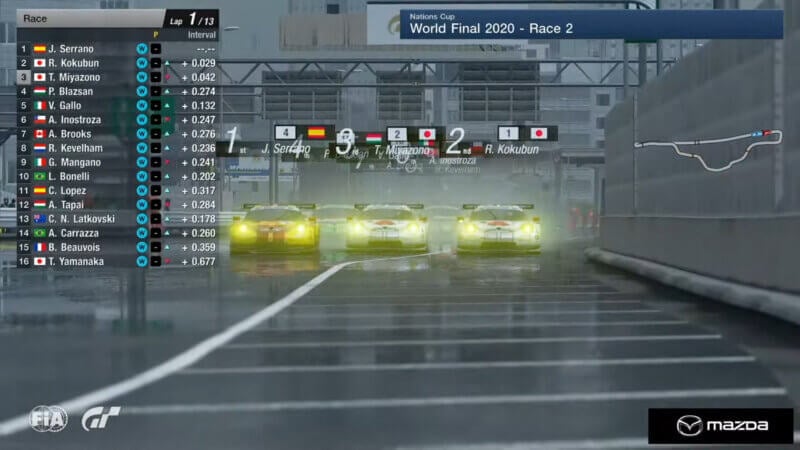 Race 2 saw the drivers head to a wet Tokyo Expressway in the Porsche 911 RSR, but the enormous change in car and conditions had no effect on pole position. Once again Miyazono was on pole, with Serrano just behind him and race one winner Gallo only down in fifth.

Tokyo Expressway is not particularly famous for its clean racing, especially with added spray, and so it proved. While the front three — Patrik Blazsan joining Miyazono and Serrano — got away cleanly, there was a sprinkling of chaos further back.

A collision at the back of the circuit between Kokubun and Gallo saw some Macau-like track blockage, as seven other cars streamed to the scene of the accident. Although Kokubun broadly got away unscathed, Gallo was shuffled down the field.

Serrano and Miyazono were making hay at the front though. With what seemed to be some tactical slipstreaming, the duo were pulling away from Blazsan at a fairly steady rate, and it was clear that the race would be decided between the two.

The ultimately proved to be the case, with Serrano going too deep into the final turn and an intelligent line from Miyazono out of it forcing Serrano to come out of the slipstream too early and lose momentum. Miyazono won by just 0.022s — the closest finish we’ve seen in Nations Cup — from Serrano, with Blazsan a solid but distant third, from Kokubun and Andrew Brooks. 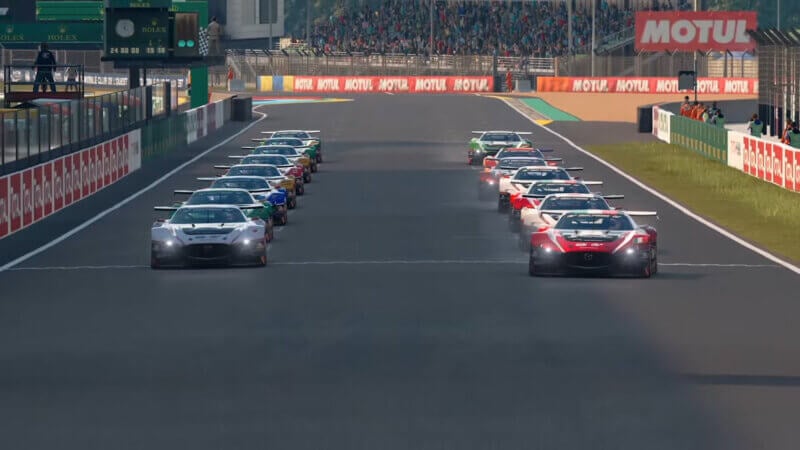 All of this relative inconsistency left Miyazono and Serrano tied on 25 points at the top, with a seven-point lead to Brooks, Coque Lopez, and Gallo all on 18 points. That meant all to play for in the final race, with a win for any of the joint-third drivers enough if Miyazono or Serrano didn’t finish second.

Qualifying made it advantage Gallo. The Italian stuck it on pole position, which Miyazono and Serrano could only place 7th and 8th, but with the long race and both fuel and tire strategy required, anything could happen.

In fact Gallo and Adriano Carrazza were the only cars to start on the soft tires and pulled away from the chasing pack, consisting of Mangano, Miyazono, Kokubun, and Latkovski, while the early hard runners swapped tires after just one or two laps.

Latkovski hit the front as almost all of the other front runners jumped into the pits, but when the remainder headed in for fresh rubber it was Gallo and Miyazono out at the front, with Miyazono closing in on soft tires.

At this point, even the win wouldn’t be enough for Gallo, with Miyazono running in second, so the Italian was relying on the chasing pack towards the end of the race to make their tire advantage count. With the front two running hards for the last three laps, the rest of the field could in theory carve chunks out of them in the permanent section of the course.

However, the theoretical tire advantage didn’t materialize. Kokubun, Latkovski, Mangano, and Yamanaka were too busy trading places themselves and not making enough ground on the lead two. In fact such was the pace advantage of the softs that Lucas Bonelli was able to carve out over two seconds in half a lap to join in the squabble, but the in-fighting prevented any progress towards the front two.

In the end Gallo did manage to skip past Miyazono, but second place was enough for the popular Japanese driver to secure the title, and an undefeated 2020. Gallo’s win kept him second overall, while Ryota Kokubun rounded out the event podium with a fifth-place finish behind Latkovski and Yamanaka.