Much like the 7 Series and its electric i7 counterpart have been tested in Sweden, ultra-luxury brand Rolls-Royce took the Spectre as well. The BMW Group facility located in Arjeplog just 55 kilometers (34 miles) from the Arctic Circle is where prototypes of the EV have been subjected to various evaluations in harsh conditions. Temperatures dropped to as low as -40 degrees Celsius / Fahrenheit and test vehicles were driven on rough surfaces.

The first Rolls-Royce coupe to ride on massive 23-inch wheels since 1926 is not a Wraith replacement. Instead, it’s seen as a spiritual successor of the Phantom Coupe as denoted by the split headlights. Along with releasing the stunning imagery, the Goodwood brand also shared some juicy tidbits. For example, the battery weighs 700 kilograms (1,543 pounds) and serves a double purpose. 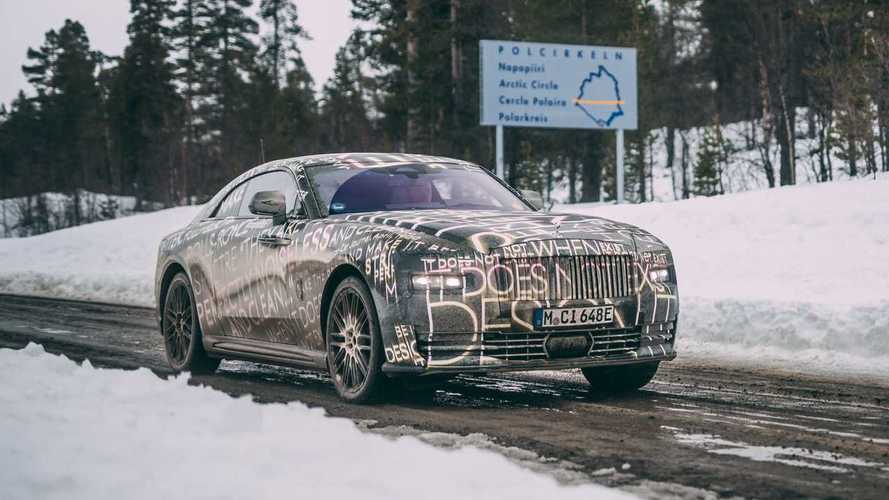 Aside from providing the necessary juice to the electric motors, the battery is a component of the efforts Rolls-Royce is making to keep the cabin whisper quiet. Indeed, it technically works as a sound-deadening material to cancel out exterior and road noises. It was achieved by mounting the wiring and piping channels between the car’s floor and the top of the battery.

Much like the Ghost, Phantom, and the Cullinan, Spectre will sit on the Architecture of Luxury platform, separate from what BMW models are using. The silent luxobarge stretching at 5.18 meters (17 feet) will have a drag coefficient of only 0.26, partially made possible by updating the Spirit of Ecstasy and lowering the windscreen for better airflow.

Now that the tests in Arjeplog have been concluded, Rolls-Royce mentions the Spectre has completed a quarter of the testing program, which will amount to 2.5 million kilometers (1.55M miles). The first RR to lose the combustion engine will reach customers by late 2023 as “The Electric Super Coupe.”

At the end of the decade, the British marque will drop the ICE altogether and sell only EVs. Mini will follow suit early in the 2030s, with BMW and newcomer Alpina to stick to gasoline engines for longer.

Uber Teams With GM To Get Access To More Affordable EVs