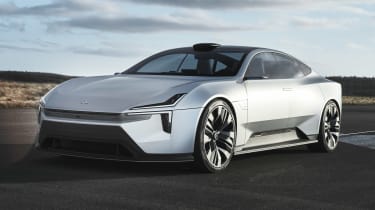 Polestar will take aim at everything from the Porsche Panamera to the Tesla Model S after the fledgling Swedish brand confirmed that it has started a plan to put its Precept concept into production.

First revealed back as a digital model in April, the Precept is a striking fastback model that’s less around 4.7 metres long but has a 3.1-metre wheelbase that’s close to matching a Mercedes S-Class limousine. It’s all but certain to be based on some variant of SPA2, the next generation of the Volvo-developed large-vehicle platform.

The electric-only manufacturer intends to make the Precept as a halo model for sustainable vehicles. Expect extensive use of recycled and plant-sourced materials inside, as Polestar tries to avoid the use of ‘virgin plastics’. The company has already confirmed that it is working with external partner Bcomp on a flax-based composite that could be used for exterior parts as well as in the cabin. 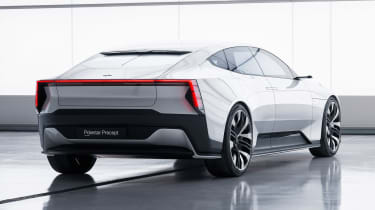 On top of this, the Precept it will be built at a bespoke new factory in an as-yet-undisclosed location in China, and the plant will be fully carbon neutral.

The company’s CEO Thomas Ingenlath declined to reveal which number the Precept will carry in Polestar’s naming policy (the 1 and 2 have already been launched, and the 3 has been confirmed as a forthcoming SUV). But he did confirm that the concept will slot into the pattern, instead of keeping its current name. “We will not change our nomenclature that quickly,” he said. “But as a codeword for us to work with until it gets into production, let’s call it Precept.”

Polestar has stated that development has now started on the car, but Ingenlath suggested that the Precept is unlikely to land in showrooms much before 2023 at the earliest. “This car will be thoroughly engineered and tested, “ he said, “so of course, three years will pass before we can talk about the start of production.” The car is likely to be launched as a range-topper in series production – not a limited edition like the Polestar 1.

Ingenlath suggested that the production Precept is likely to have no more than 500km (310 miles) of range, as Polestar focuses on responsible, practical battery sizes and fast recharging. “A premium sports car like this has to have range that’s competitive,” he said. “But we cannot allow ourselves to drift away into that race for range. If you’re talking about making a car more efficient, that’s great. If you’re talking about packing more and more kWh into the car to make the best range figure, it’s crazy because that doesn’t help us get closer to making a sustainable car.” 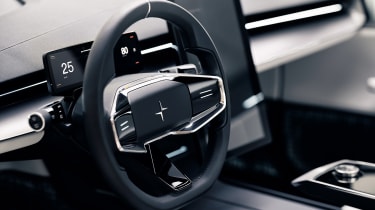 He added, “Once a car is anywhere between 450-550km of range, why would you go for more? I can’t drive that much longer and my kids want to stop by then. You have to have decent range, but it’s also defined by how long you can sit in the car and travel without needing the bathroom, for example. And at that point, where you stop – and this is much more important – there should be be fast charging.”

Ingenlath revealed that the forthcoming 3 will get an evolution of the Android Automotive infotainment system already seen in the Polestar 2, and said it would be “crazy” to not use these technologies in Precept. Engineers have “found ways to construct Precept”, he stated. “For certain chassis elements, to achieve a seating position and a sporty low car, you do have to adapt certain elements,” he said. “That probably means metalwork but that’s not what defines a platform these days.”

Customer reaction to the concept and increased demand for sustainable materials helped to persuade Polestar to commit to the Precept’s production, Ingenlath said. “Generations are changing; younger people are becoming older. The premium segment is changing into that direction, so luxury has this topic [sustainability] in focus. If you go to a fashion show, it’s about implementing this type of new materials into haute couture.

“First it was the electric car; this is how it suddenly become no longer a niche. Thank god that discussion is over. But now it’s not enough being electric. How do you charge it? Do you sit on a big lump of plastic made out of virgin oil, or a much more appealing material? It’s definitely listening to the customer and where they are going.”