One of three new Peugeots that will be introduced in Malaysia next year by new distributor Bermaz is the Peugeot e-2008, according to an RHB Investment Bank analyst report. The fully-electric version of the new 2008 B-segment SUV, which will be launched next month, will arrive in the final quarter of 2022.

The e-2008 will also complete Bermaz’s EV offensive, which includes the Mazda MX-30 and Kia EV6. Bermaz, synonymous with Mazda in Malaysia, took over the stewardship of Peugeot and Kia brands last year. Both marques were previously held by Naza in our market.

First revealed in June 2019 as part of the all-new second-generation 2008 range, the EV ditches the compact SUV’s internal combustion engine in favour of a 130 hp/260 Nm motor, juiced by a 50 kWh lithium-ion battery. 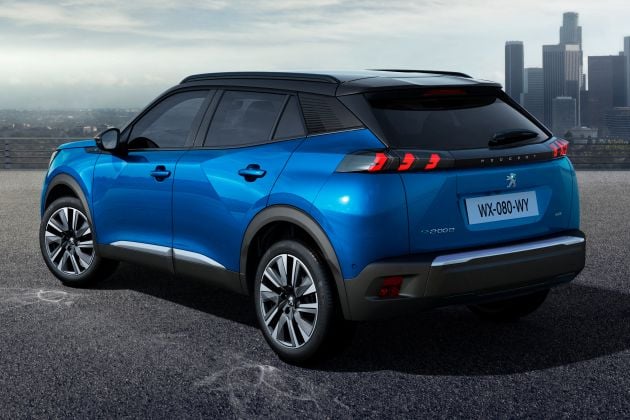 Peugeot quotes a charge time of 16 hours on a domestic 230-volt socket, or eight hours through a 7.4 kW single-phase wallbox (five hours and 15 minutes with a 11 kW three-phase version). The battery supports up to 100 kW of DC fast charging (CCS connector; Type 2 for AC charging), so a 30 minute pit stop will get you up to 80% state-of-charge. The original quoted range was 310 km on the WLTP cycle, although that was very recently bumped up to 345 km.

Among the changes responsible for the extra range are a gearbox ratio, lower rolling resistance tyres, plus a new heat pump with an interior humidity sensor. The latter helps control air recirculation in the passenger compartment more accurately, mitigating temperature fluctuations and minimising energy usage.

Setting the e-2008 apart from the ICE variants is a body-coloured grille with a dichroic lion badge, “e” badging and Greval Grey Alcantara trim. All 2008 models come with active grille shutters, aero-optimised wheels and a streamlined underbody.

Bermaz has a trio of upcoming EVs, but if you’re interested in an electric crossover with Budget 2022 tax exemption, Hyundai already has one with the Kona Electric. Launched last month, the EV comes in base 39.2 kWh form and a top 64 kWh model, with 305 km and 484 km of WLTP range, respectively. It is priced from RM149,888 to RM199,888 on-the-road without insurance.