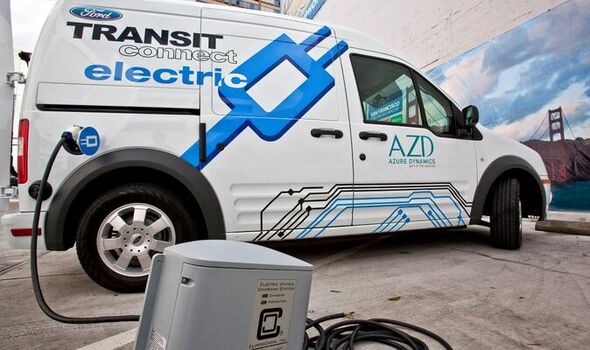 Other worries include doubts over the initial cost of buying an EV (16 percent), running out of charge – or range anxiety – (15 percent), and a perceived lack of charging points (13 percent).

And 13 percent are put off because they don’t have a charging station at home, with 12 percent fearful over the cost of repairs.

Despite the concerns, a quarter (26 percent) of those who drive a petrol or diesel van for work believe their company would be perceived more positively if they were to make the switch.

The research was commissioned by Ford as part of its latest “Go Electric” report, which aims to highlight the challenges and benefits of Britain’s move towards electric vehicles.

Mandy Dean, commercial vehicle director for the vehicle manufacturer, said: “Our research shows while there are concerns about the switch, van drivers seem willing to embark on the journey to go green.

“Understanding people’s perceptions of electric vehicles is vital to making sure we’re all on board – including the commercial vehicle sector, which is so important for the UK’s economy.”

A separate study, by the Society of Motor Manufacturers and Traders, found 13 percent of passenger vehicles on Britain’s roads are now electric or hybrid – but only 0.3 percent of commercial vehicles are fully electric or plug-in hybrids.

With the ban on combustion engine vehicles in 2030 edging closer, the Ford study found 38 percent of those polled believe getting an electric vehicle is a “smart investment”. 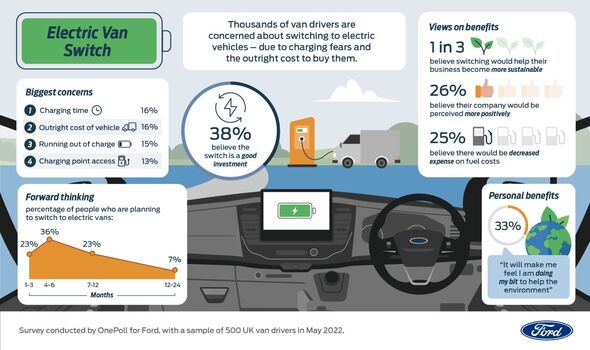 And nearly half (49 percent) believe electric vans will be the most common type of van on Britain’s roads within the next 10 years.

Of those who run a company or work for a business yet to move toward e-vehicles, one in ten believe the switch is imminent – with 59 percent expecting this to happen within the next six months.

And 23 percent believe the change will occur as soon as the next three months.

More than half (52 percent) think taking this course of action would be a “really cool” move.

Despite the growing belief in the future of EVs, many feel they do not have a good understanding of how they work.

And many also are apparently unsure what the typical range of the latest generation of electric vans is – on average, those polled incorrectly think an EV lasts just 67.5 miles before needing to be charged.

Of those who drive company-owned electric vans, nearly three-quarters (71 percent) admitted they’re unsure how they’d be reimbursed for electricity costs if they charged their company vehicle at home.

Fixed Chevy Bolt Batteries Are on the Way