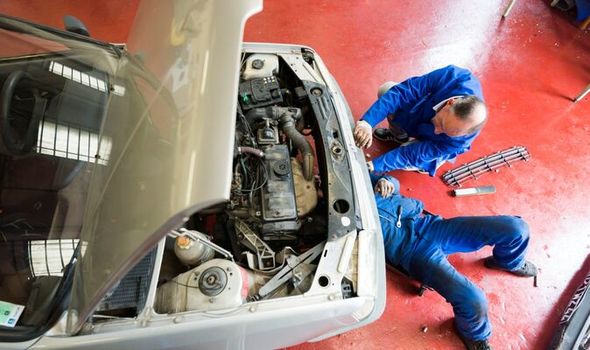 However, 40 percent of those women feel they were overcharged as they had very little car knowledge so couldn’t question the quote – while just 29 percent of men said the same.

And a staggering 74 percent of women feel they were quoted too much simply because of their gender, compared to just 12 percent of men.

Younger adults also feel more targeted with overcharging and high quotes – with 74 percent of 18-24-year-olds believing they have been caught out before, along with 72 percent of 25-34-year-olds.

And a savvy one in five discovered they had been overcharged after doing online research.

Other reasons for car owners being suspicious about quotes to fix their vehicle included friends or family having similar work done at a cheaper price, and previously having a like-for-like job done at another garage themselves – for less money.

Three in ten of those who thought they had been overcharged complained to friends and family after the incident, with just one in five complaining to the manager of the garage.

In extreme cases, a tenth said they had even taken legal action after they felt they had paid over the odds.

Limvirak Chea, co-founder and CEO at Fixter, said: “Getting your car fixed can often mean a big bill – which no-one wants.

“So, it can make it even worse if you feel like you are being charged too much.

“There are stereotypes around the industry which can make people suspicious and question whether they are paying too much, and a lack of transparency can also make this worse.

“We believe getting your car fixed or maintained should be a simple task – convenient for you and also something where you are completely clear on what you are paying and why.”

The study also found a fifth of car owners don’t always trust the garages, and end up turning to Google to try and work out if they are being overcharged.

Nearly half (47 percent) believe dealerships are likely to charge them more when it comes to fixing their car, compared to just 16 percent who think independent garages are the most likely to do so.

But more than half of motorists would also use smaller, independent garages rather than larger chains, because of cost (52 percent), convenience (47 percent) and good customer service (46 percent).

Despite cost being cited as one of the main factors for choosing where to fix their car, four out of five don’t shop around and instead take their car to the same garage.

It also emerged almost six in ten motorists would like to see more transparent pricing, and nearly half want garages to be clearer on the repair work needed.

And 38 percent of those surveyed, via OnePoll, admitted to putting off repairs on their car, due to fears over the cost (65 percent) and a lack of time (37 percent).

Limvirak Chea, from Fixter, added: “It’s important that car owners have confidence in what they’re paying for and that they’re happy with the end result.

“Paying a fair price and having transparency over costs is vital to rebuilding trust between motorists and garages, and we want to help bridge the gap between both parties to ensure everyone is happy.

“By looking online via our website, you can easily compare prices – so no matter who you are or what you look like, you can be confident you’re paying a fair, transparent price.

“As Fixter employs in-house mechanics who liaise directly with our local, independent garage network, you can be sure you’re getting a great deal.”