Nissan has announced plans to invest $500 million to transform its plant in Canton, Mississippi into a center for EV manufacturing and technology.

Nissan is targeting 40% of its US vehicle sales volume to be fully electric by 2030, with even more to be electrified. The two electric vehicles that will enter production in 2025 at the Canton plant are teased in two photos that reveal their front lighting signatures.

In both cases, the signatures span the entire width of the vehicles and include illuminated badges. The teaser photos don’t reveal much else, but looking at the video above, both vehicles appear to be either sedans with a fastback tail or crossover coupes—it’s hard to tell from what we’re allowed to see.

We also get to see their full-width taillights echoing the front lighting signature. It’s probably safe to assume the vehicles will share the same platform given that they are scheduled to enter production at the same plant at roughly the same time.

Gallery: All-new Nissan and Infiniti EVs to be built in Mississippi plant from 2025 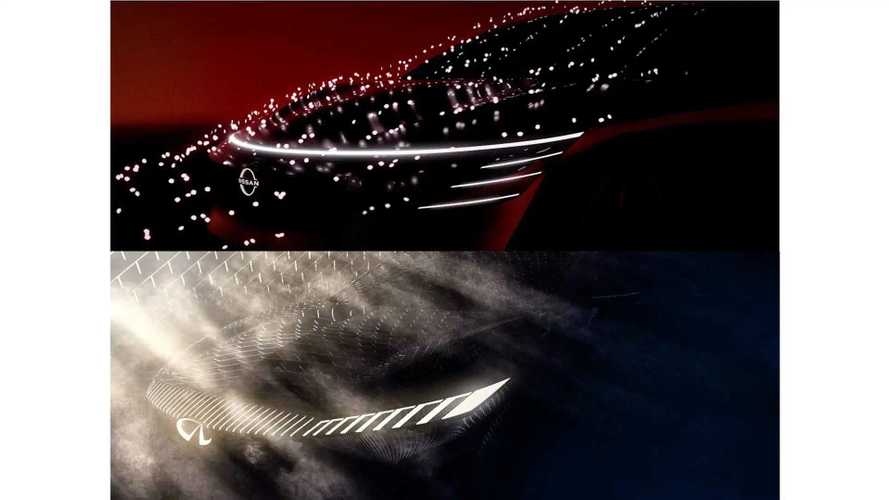 Nissan did not reveal any information about these all-new EVs, but chances are they will use one of the five common EV platforms recently announced by Renault, Nissan and Mitsubishi.

Ruling out CMF-AEV (Dacia Spring), KEI-EV (kei car EVs for Japan) and LCV-EV (commercial vehicles), the only two viable platforms would be CMF-EV and CMF-BEV. The former looks like the most obvious choice given that it’s the same platform used by the Nissan Ariya. The latter is for subcompact vehicles like the upcoming Renault 5 EV and the all-electric Nissan Micra successor for Europe.

Back to the Canton, Mississippi plant, Nissan says the $500 million investment for EV production will preserve and upskill nearly 2,000 jobs. Interestingly, the factory currently employs 5,000 people and the press release does not mention what will happen to the remaining 3,000 employees not allocated to EV production.

“Today’s announcement is the first of several new investments that will drive the EV revolution in the United States. Nissan is making a strong investment in Canton’s future, bringing the latest technology, training and process to create a truly best-in-class EV manufacturing team.”

The plant, which is celebrating its 19th anniversary this year, has build nearly 5 million vehicles since opening in 2003. It currently builds four Nissan models: Altima, Frontier, Titan, and Titan XD.

Seven-Seat Tesla Model Y is Near, but How Will It Squeeze in That Extra Row?