Nio has just taken the digital wraps off its mid-range SUV, the ES7, and it looks ready to take on the best vehicles in its segment with a combination of good design, specs and tech. This five-seater-only model is also Nio’s fastest ever SUV, capable of sprinting to 62 mph (100 km/h) in 3.9 seconds in its most powerful guise.

Given how long its wheelbase is, 116.5 inches (2,960 mm), and its total length of 4,912 mm Nio could have comfortably fitted a third row and designed the vehicle around that concept. However, it chose to give the up to five occupants excellent room in all directions and focused on making the vehicle appear premium and tailoring it not only to Chinese tastes, but also European and American preferences too.

Its design is consistent with the rest of the Nio range, although its unique wheel arches and fender design do make it stand out. From the rear, there are hints of the Range Rover Velar about its design, hinting at the kind of buyers the Chinese company wants to take from traditional automakers.

Three battery packs will be on offer for the Nio ES7 (the same as for the rest of its range) – the base 75 kWh pack with a claimed range of 301 miles (485 km), the mid-range 100 kWh pack that takes that up to 385 miles (620 km) and an even bigger 150 kWh pack that should provide 528 miles (850 km). The latter is actually going to be a solid state battery with exceptionally high energy density 50 percent greater than today’s 100 kWh pack and Nio says it should debut in Q4 of this year.

Powering the ES7 is a pair of electric motors, one for each axle, which together provide 644 horsepower and 627 pound-feet (850 Nm) of torque. Contributing to its impressive stated range is the vehicle’s very low drag coefficient of just 0.263, putting it on par with a BMW i8. 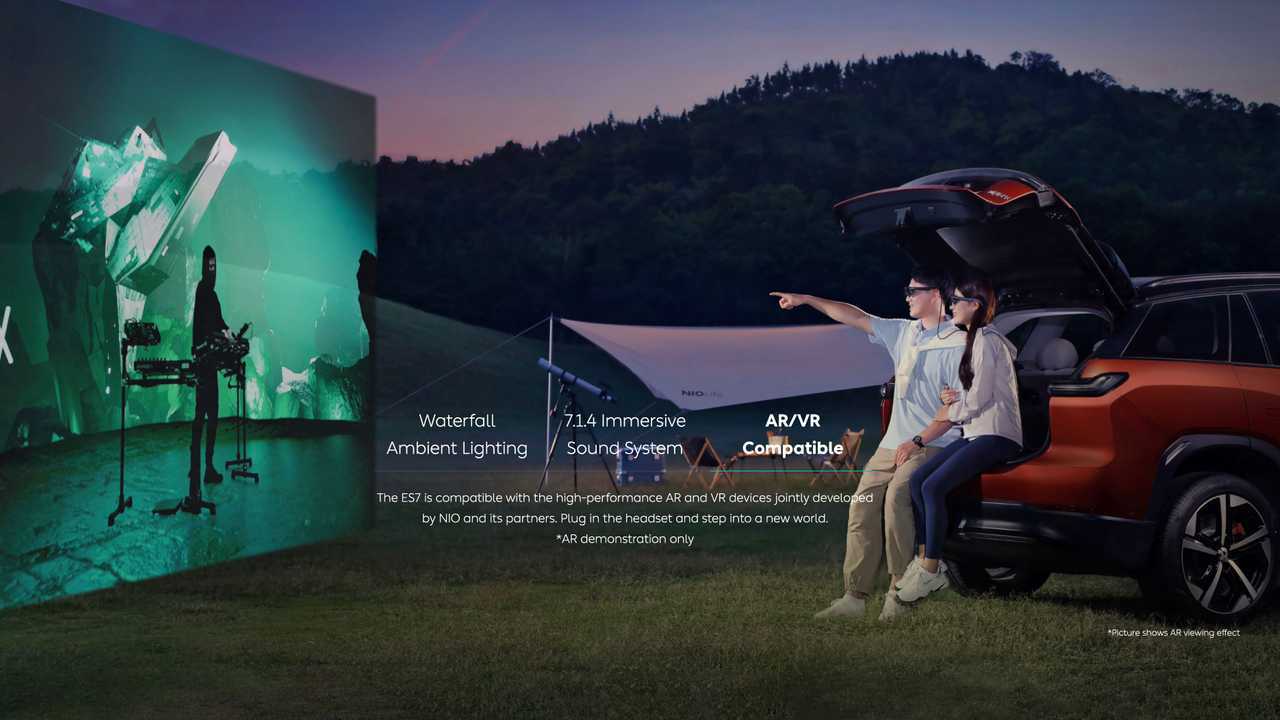 One quite unique feature that we’ve not heard about being implemented on another car is the standard augmented reality projector (shown above) that when used with special glasses actually creates what the manufacturer says appears to be a 201-inch screen located 6 meters away. The vehicle also has 7.1.4 Dolby Atmos surround sound and a 256-color “digital waterfall” mood lighting inside; V2L (vehicle to load) is also standard.

In China, the ES7 starts at the equivalent of just under $70,000 for the 75 kWh battery. Opt for the larger pack and the price goes up to almost $80,000. If you go for Nio’s battery-as-a-service, then you pay less up front, about $59,000 and you will pay a monthly lease with access to the manufacturer’s battery swapping stations.