Electric bicycles and motorcycles certainly have their niche, and, for the most part, can effectively take the place of gasoline-powered motorbikes and small cars. Of course, a four-wheeler will inevitably be necessary for longer trips out of town, especially those loaded with cargo and luggage. In the city, however, e-bikes and motorbikes pretty much have you covered—except for when it rains.

Sure, a lot of us who get around on two wheels absolutely don’t mind getting wet in the rain. However, for those who are a bit more particular when it comes to weather, micro-mobility startup from Michigan, Nimbus, has a solution for you. It’s called the One, and it’s a small, autocycle, which is essentially a three-wheeled electric bike with a roof on it. Nimbus claims that the One offers the convenience of a motorcycle, with the safety and comfort of a car.

The slim, pod-like three-wheeler is about 2.75 feet wide and 7.5 feet long, making it significantly smaller than even the smallest automobile. This makes parking and navigating through congested city streets much simpler. It also provides space for a passenger, or storage for items like groceries and packages from shopping trips. 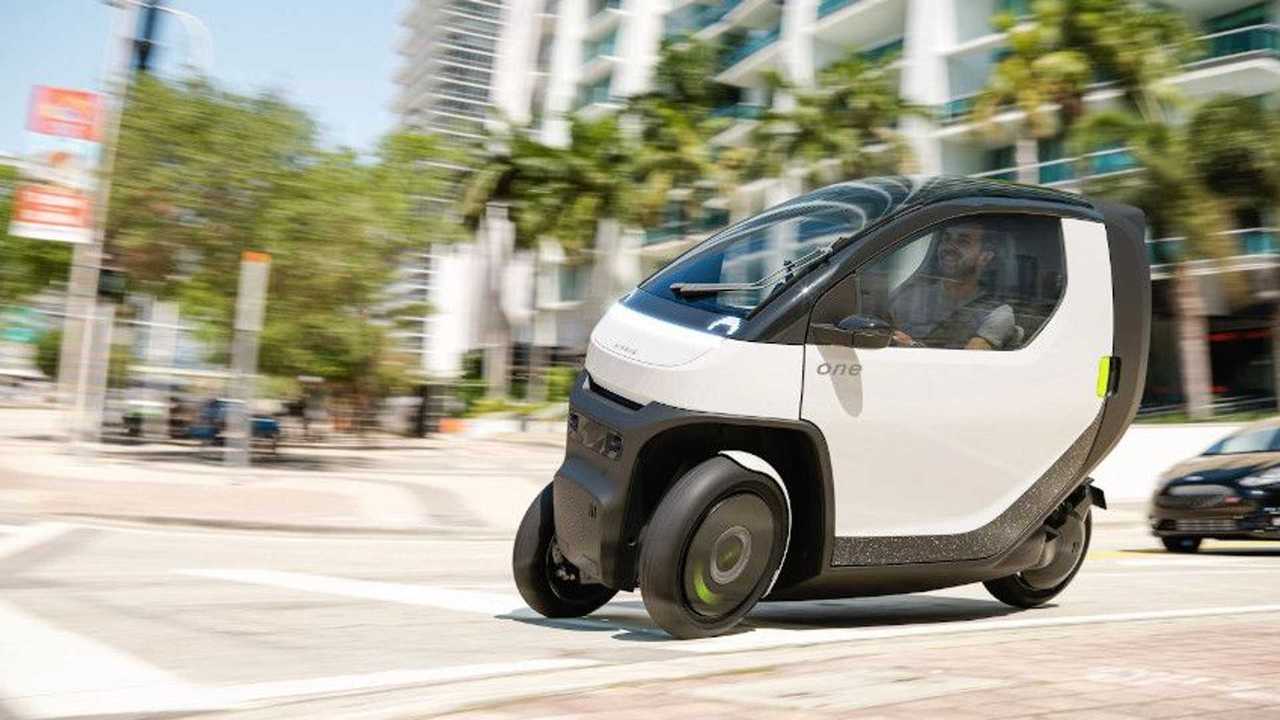 As for the way the Nimbus One drives, it’s pretty similar to a motorcycle. As such, the vehicle also tilts, like a motorbike or scooter would. The Nimbus One, as stated earlier, is classified as an auto-cycle in the U.S. As such, users need not go through the lengthy process of acquiring a motorcycle license. Folks with a regular car license can easily drive the Nimbus One, and the auto-cycle leans, corners, and drives like a car would—meaning users need not go through training in order to safely drive the vehicle.

The Nimbus has a top speed of 50 miles per hour, since it is designed for city travel rather than interstate driving. The Nimbus One is outfitted with a 9 kWh battery that has a range of 93 miles. The battery can be charged either with a Level 2 charger which takes 1.2 hours to charge, or a regular home charger, which takes around 5.4 hours. The Nimbus One features a digital display, Bluetooth smartphone connectivity, power windows, a built-in phone charger, and even an optional air-conditioning and heating system. Furthermore, software and system improvements can be installed via over-the-air updates.

As for availability, pre-orders for the Nimbus One started earlier in June, 2022. Test drives for interested clients will begin in the next month, according to Nimbus. The company is asking for $100 USD down payment per order, while the Nimbus itself will have a retail price of around $9,980 once available. Furthermore, Nimbus plans to lease out the One electric auto-cycle for $200 USD per month.