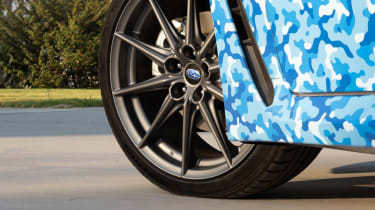 Subaru has released the first teaser image for the second-generation BRZ sports car and has confirmed that it will be revealed this autumn, following a private reveal to a small group of attendees at this year’s Subiefest in California, United States.

Like the previous-generation model, the new BRZ will be twinned with an all-new version of the Toyota GT86, after the two companies agreed to renew their joint sports car venture earlier this year. Both cars will be based on a fresh rear-wheel-drive platform and, according to the rumours, they’ll be powered by a 252bhp turbocharged engine.

Subaru has confirmed that, for now at least, it has no plans to launch the new BRZ in the UK – it’s saving the coupe for the North American market. However, the new Toyota GT86 will fill the void for British buyers, with an expected UK launch next summer.

Subaru’s teaser image gives little away about the new BRZ’s styling, other than that it’ll feature a fresh air vent behind the front wheel arch. The wheels fitted to this prototype also appear to have been lifted from the Toyota GR Yaris, suggesting the new sports car could share its hub carriers and brake components with the hot hatchback.

Specifications for the engine are yet to be announced, but rumours suggest BMW power could be on the cards. Toyota recently confirmed that two in-line four-cylinder versions of the GR Supra will be available for the Japanese market – the most potent of which will use the same 252bhp 2.0-litre engine found in the mid-range BMW Z4 sDrive30i.

Should the same engine be transferred into the new BRZ/GT86 in the same state of tune, it’ll have a maximum torque figure of 400Nm – which is a 195Nm increase over the outgoing model. However, the unit isn’t currently available with a manual transmission in any of BMW’s vehicles so, unless Toyota and Subaru can develop one to suit, the next BRZ/GT86 could be automatic-only.

The current BRZ is powered by a naturally aspirated 2.0-litre boxer engine, which develops 197bhp and 205Nm of torque. Power is sent to the rear wheels via a six-speed manual gearbox, providing a 0–62mph time of 7.6 seconds and a top speed of 140mph. It’s still on sale in the UK, priced from £32,020.

Toyota and Subaru also recently agreed to co-develop a new all-wheel-drive battery-electric SUV, tasked with rivalling the likes of the Volkswagen ID.4 and Tesla Model Y. The brands stated that both of these business arrangements will further “develop and strengthen” their long-term partnership. Toyota has also increased its stake in Subaru by 3.17 per cent, upping its overall ownership of the brand to 20 per cent.

Are you excited for the second-generation Subaru BRZ and Toyota GT86? Let us know in the comments section below…