The next-generation Volkswagen Passat returns in a new batch of spy photos, this time showing the plug-in hybrid version of the German family vehicle. This prototype was spied by our friends and colleagues at Motor.es in broad daylight showing the position of its charging port and other interesting details.

As we’ve already reported, the next-gen Passat will be available only as a wagon, and judging from what we are able to see in these photos, it will be slightly larger than the outgoing model. There’s a panel that extends the area around the B pillar, which hints at a potential longer wheelbase. Keep in mind we are talking about the version for the European market as the Passat is gone for good in the United States. 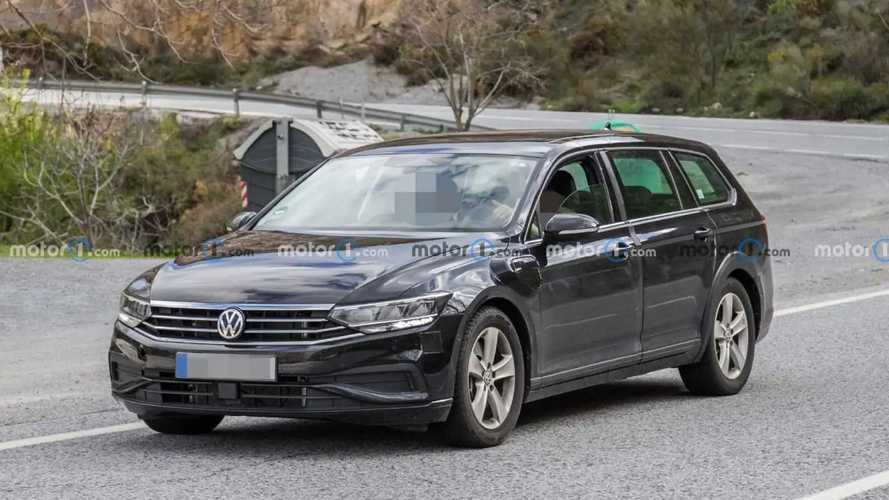 Believed to be called the Passat Variant eHybrid, this electrified long-roof vehicle has a charging port on the front left fender. This, together with a modified Volkswagen logo, will be the only design changes compared to the regular combustion-powered model. However, much more important changes will happen under the skin where the Passat is expected to get a new plug-in hybrid powertrain.

Motor.es reports the 1.4-liter TSI turbocharged engine of the current PHEV system will be replaced by a larger 1.5-liter engine with a cylinder deactivation function. The combustion unit will be supported by a small electric motor housed within the dual-clutch automatic gearbox. More importantly, Volkswagen will reportedly put a twice bigger battery, which should give the new Passat PHEV an all-electric range of up to 62 miles (100 kilometers) depending on the conditions.

While the exterior will feature evolutionary styling, the interior of the new Passat – in all its versions – will be radically new. Photos from earlier this month showed a new dashboard with a cleaner design and more digital gadgets. As expected, the center console will be dominated by a large tablet-style screen. As a cost-cutting measure, Volkswagen will replace the physical buttons for the heating and air conditioning with capacitive-touch controls.

Look for the new Passat to hit VW’s showrooms around Europe next year. It will be produced in Slovakia alongside the new Skoda Superb and will be joined by an all-electric sedan, tentatively known as the Aero B, also currently under development.

Lightyear One Solar EV Achieves 440 Miles on a Single Charge