As the full debut of the next generation of its flagship S-Class sedan nears, Mercedes-Benz is sharing further details about the improvements it’s making to the agenda-setting luxury car. The latest announcements include a new-to-the-S-Class active suspension, updated safety features designed to better protect occupants in a collision and rear-axle steering to make the big sedan easier to maneuver.

Mercedes’ E-Active Body Control suspension will be optional on the S-Class for the first time, offering a real-time adaptive suspension that can analyze road conditions, vehicle behavior and other factors “up to 1,000 times a second” and adjust the suspension accordingly. This includes a “Curve” feature that lets the car lean into curves without as much disruption to occupants — something Mercedes thinks might benefit those with “sensitive stomachs.” In addition to body roll, the system also works to reduce up-and-down body movements. 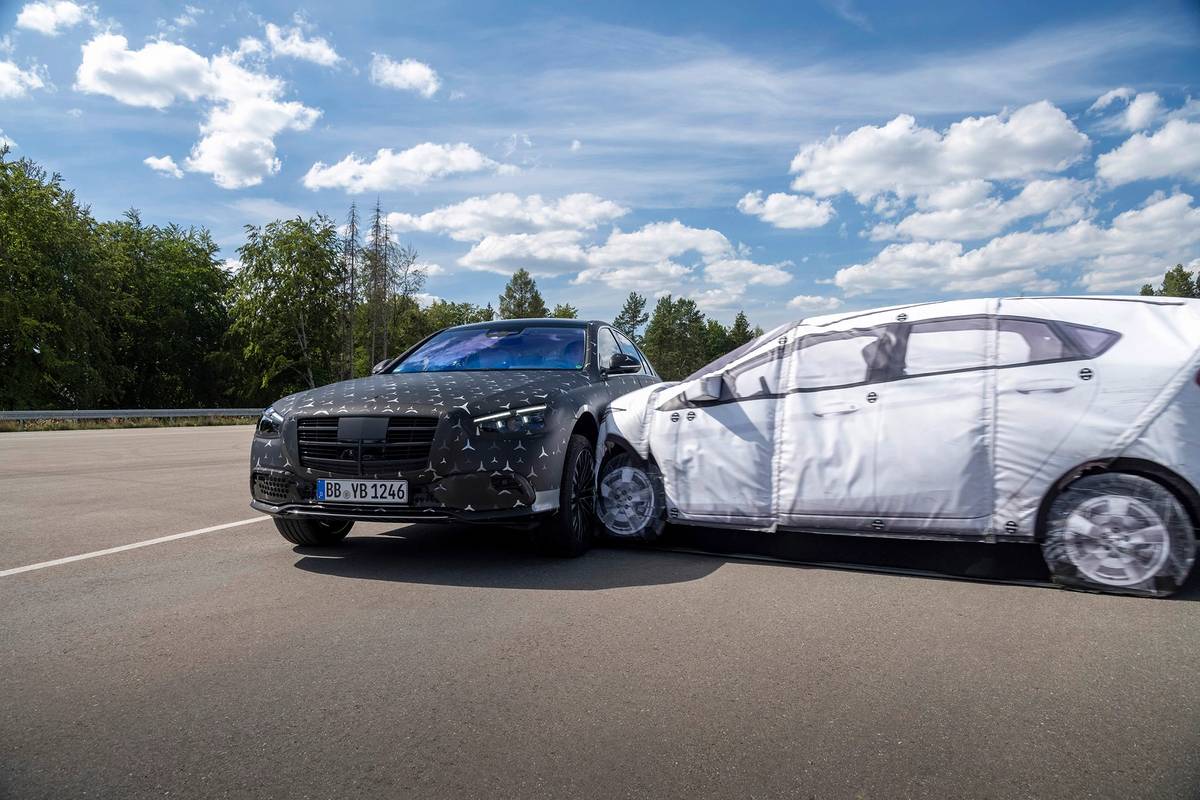 The suspension also comes with a new feature focused on safety, which Mercedes is calling Pre-Safe Impulse Side. When sensors detect an impending side collision, the suspension can lift the car up to 3 inches, which Mercedes says will direct crash forces toward more reinforced areas of the car’s structure.

Mercedes is also installing frontal airbags for rear passengers — at least for those in the outboard seats — in new S-Classes equipped with the optional Executive Rear Seat Package. The automaker says the new airbags “can greatly reduce the loads acting on the heads and necks of the outer rear passengers.”

Working in conjunction with the Mercedes-Benz User Experience multimedia system — known as MBUX — Interior Assistant, exit warning sensors can now detect when an occupant is reaching for a door handle and warn of an approaching vehicle or cyclist to help prevent any incidents caused by opening a door.

A camera-based system can also detect a child seat on the front passenger seat and display a warning to buckle up. Illuminated belt buckles are also optional and make it easier to locate seat belt buckles, which — Mercedes hopes — will encourage more seat belt use.

Newly optional rear-axle steering with a maximum angle of 10 degrees allows the rear wheels to turn with or opposite the front wheels depending on factors like speed and steering angle, which Mercedes says will improve maneuverability at low speeds as well as vehicle stability. With the feature, the new S-Class will have a claimed turning radius of less than 36 feet, which Mercedes says is a reduction of as much as 7 feet. The parking assistant and active parking assist features will take rear-axle steering, if installed, into account when maneuvering the vehicle.