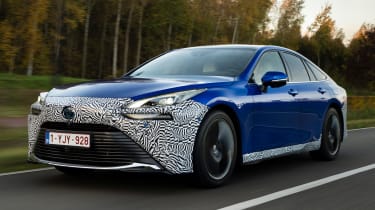 Disregarding the fuel cells beneath its bonnet, the Mirai is up there with ‘normal’ luxury saloons for the suave way it goes down the road. More than that, it’s a fantastic showcase for Toyota’s increasingly efficient and affordable hydrogen tech. Sadly it’s still teeth-suckingly expensive next to ICE alternatives, and is likely to remain a niche corporate purchase for a while yet. But with hydrogen cars this good on the market, the infrastructure surely can’t be far behind.

The development of hydrogen fuel cell vehicles (HEVs) has been stuck in a chicken and egg debacle for many years now. Which comes first – the cars or the infrastructure?

Given that there are currently 14 hydrogen filling stations in the UK, despite the fact that there have been two hydrogen fuel cell vehicles available (albeit at prohibitive cost) on sale over here in the shape of the Hyundai Nexo and Toyota Mirai, it looks like the car is going to have to come first.

So here is Toyota’s latest effort to further the hydrogen cause; the all-new, second generation Mirai. This is an early pre-production model but, with the car now based loosely on a Lexus LS platform, the Mirai has become rather suave and dashing in an understated kind of way.

Unless you were looking for the tell-tale badges on the outside, you’d never know that a fuel-cell stack sits beneath its bonnet, which in turn drives a 180bhp electric motor mounted on the rear axle. In the middle of all that sits three T-shaped hydrogen tanks that can take 5.6kg of hydrogen – the equivalent of 142.2 litres, giving an estimated driving range of around 500 miles between fill-ups (which take no longer than in a petrol or diesel car). 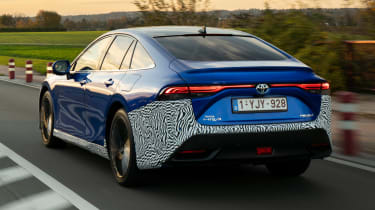 In practice, the serene-feeling new Mirai is a revolution to drive compared to its predecessor. The steering is light and, while far from precise, feels direct and predictable. Ride comfort is truly exceptional, too. There’s quite a bit of pitch and heave as the sizeable body (which roughly splits the difference between a BMW 5 Series and 7 Series) shifts about, but it’s well controlled and unobtrusive, not to mention worth living with for the pillowy way the Mirai rolls over scruffy surfaces.

This comfort, and the near silent, seamless power delivery are the defining characteristics of the Mirai’s newfound luxury ambience. A hydrogen fuel cell vehicle is still driven by an electric motor so you get the same continuous, uninterrupted stream of acceleration that is becoming familiar with normal battery EVs. There’s no discernible noise at all from the fuel cells as they putter away mixing hydrogen from the fuel tanks and oxygen from the atmosphere, to create electricity for power, and a small amount of water as the only bi-product, which you can purge by pressing a tempting ‘h2o’ button just next to steering wheel.

This powertrain is quiet and refined by its very nature, then, and in the Mirai it’s cosseted in a car that’s been given all the refinement treatment you’d expect of a top-notch Lexus. But for a distant burr of wind and tyre rush, noise and vibration in the Mirai is virtually indiscernible.

Even the interior, which is stuffed with high quality leather, chunky armchair-like seats, a huge touchscreen resplendent with Apple CarPlay and Android Auto as well as factory-fit nav, feels befitting of a limo-class car despite the odd cheaper-feeling switch and panel finish. There’s luxurious amounts of room to stretch out in the back seats, too.

The only thing about the Mirai that isn’t luxurious is the performance. It doesn’t feel as lazy as the 0-62mph time of 9.2 seconds suggests; there’s decent pick up even from middling speeds to motorway speeds, but for a big, plush car – environmentally minded or not – it’d be reasonable to expect better performance. Toyota maintains that it can put a more powerful motor in fairly easily, but with efficiency and range the chief priority with the Mirai, engineers stuck with stately rather than sporty performance. 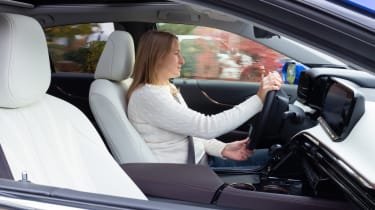 As it is, it’s really rather lovely to drive in a big, wafty, almost eerily quiet fashion. But more importantly it represents a host of incremental gains that could help to make hydrogen a feasible solution for mainstream vehicles.

The fuel cells are now lighter and more efficient, and the fuel tanks aren’t just bigger, they’re made of a new, lighter and more affordable carbon fibre. More than that, with these gains factored in and Toyota’s increasingly refined hydrogen fuel cell production line, the company can now punch out a hydrogen fuel cell in a matter of seconds – and for usefully less money than before.

Having said that, the Mirai still may not even be available as a normal retail purchase. List prices are yet to be confirmed, and while it’s expected to be more affordable than before, you’ll probably still have to find around £65,000 – or a monthly lease payment (the previous generation cost £750 per month) is also a likely option.

That’s cheaper, yet a million miles from cheap. Even without the extreme limitations of the hydrogen charging infrastructure, being able to get an Audi A6, BMW 5 Series or otherwise for some £20,000 less makes the Mirai, well… Let’s just say it’s hard to recommend. Even so, that shouldn’t detract from the fact that it is, by any measure, lovely to drive and – most importantly – a superb showcase for hydrogen fuel cell technology.