The Z Proto concept hints at the next Z car, which is likely to be named the Nissan 400Z, but the production model won’t be coming to Europe 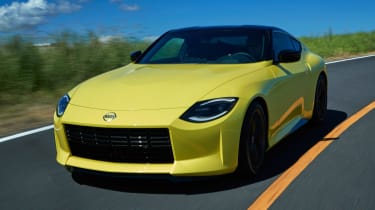 This is the Nissan Z Proto, a new concept which previews a twin-turbocharged V6, rear-wheel-drive sports car that will be the next in the famous Z series from the Japanese brand. But in a shock move, the firm has already ruled out bringing the production model to Europe.

The Z Proto incorporates classic Z styling cues, even referencing the yellow paint that was a common choice on the original 240Z and the 300ZX from the eighties. The car’s stance retains the ‘haunch’ around the C-pillar – a key cue from previous Nissan sports cars, including the 350Z and 370Z. At the front, the semi-circular LED headlights at the nose are unashamedly a cue from the original – albeit mixed with an aggressive-looking low spoiler and a gaping air intake that dominates the front bumper.

Further back, the tail-lights are an obvious nod to the 370Z, with a rectangular background that runs across the rear and wraps around onto the rear wings. The concept also has both Z and Fairlady badging – again, referencing its predecessors. 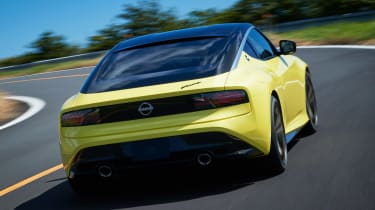 Inside, the concept has a cabin that looks ready for production. There’s a 12.3-inch digital instrument panel which has the redline shift point at the 12 o’clock position, and a deep-dish steering wheel.

Nissan has not revealed much about the new car’s underpinnings but it says it will have an “enhanced” twin-turbocharged V6 petrol engine and, significantly, a six-speed manual gearbox. Nissan boss Makoto Uchida said, “With the Z, we’re bringing drivers the excitement of a pure sports car. For more than 50 years we’ve been creating the legend of Z together. The new Z is on its way.” 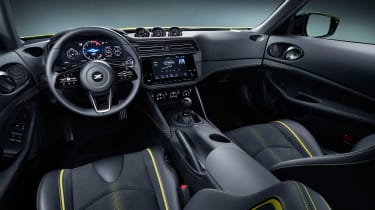 It is not on its way to UK customers, though. Nissan had been expected to sell the Z as a global model, using it as a flagship vehicle to sell alongside revised SUVs and an expanding pure-electric line-up. But at the car’s digital reveal it was announced that the company has ruled out selling the production version of the car – expected to be called 400Z – in Europe.

In a statement, Nissan said, “A shrinking European sports car market and specific regulations on emissions mean that Nissan was unable to build a viable business case for the introduction of the production version of the next-generation Z-car in Europe. In Europe, Nissan’s priorities remain its commitment to renew its crossover line-up and accelerate its range electrification strategy.”

That means the 400Z will probably be focused on the United States, where selling a twin-turbo petrol motor should encounter fewer legislative issues. It is conceivable, though, that right-hand-drive versions from Nissan’s domestic market in Japan could be sold to UK customers by an importer.

Renault and Nissan suffered heavy losses in 2020, check out the full story here…

CHAdeMO Condolences Video Will Make You Laugh Out Loud