The Hyundai i30 has been facelifted for 2020. We hit the road in a prototype model ahead of its official arrival 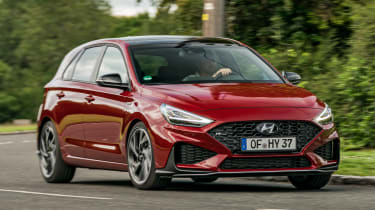 The new engine and trick transmission work well in the i30, so we’re keen to see certified numbers and try a longer test to rate its real-world economy. The rest of the car, though, remains somewhere around the middle of the family hatch pecking order. Pricing and finance deals will be key.

The current Hyundai i30 has been with us for more than three years now. So this Volkswagen Golf and Ford Focus rival has received some timely mid-life updates, and we’ve been able to try a prototype on UK roads.

The exterior tweaks to the i30 are minor, with a slightly wider front grille, slimmer headlights, different daytime running lights and a fresh rear bumper. Inside, there’s a seven-inch digital instrument cluster and a widescreen 10.25-inch infotainment system.

The big news comes under the bonnet, where there’s a new 1.5-litre petrol engine, called T-GDI, that has a 48-volt starter/generator which stores energy under braking and then uses it to aid acceleration. This 158bhp unit will be available with either a six-speed ‘intelligent’ manual gearbox (tested here) or a seven-speed dual-clutch. Hyundai UK says it will be available only in sporty N Line trim.

The engine feels punchy enough in a car of the i30’s size, and the mix of ISG and turbocharger gives it a fair amount of low to mid-range shove. The best work is completed by 2,500rpm, which is just as well, because it starts to sound a bit coarse at 3,000rpm.

The manual gearbox has a pleasingly mechanical shift and a well judged throw. But behind the scenes, the new transmission is able to decouple the engine from the gearbox when the driver lifts off the accelerator – in effect, to activate coasting, either by bringing the revs back down to idle or by turning off the motor altogether.

It works well; you’ll notice the rev counter jump around as the transmission works its magic, but it never compromises the driving experience.
It just saves you fuel, in theory – although we’ve yet to see any official CO2 emissions or economy figures.

EV Battery Systems To Be A New Cornerstone Of Valmet Automotive