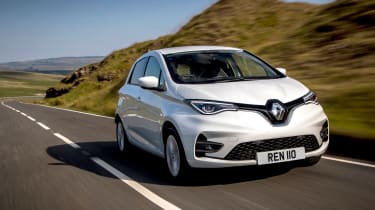 Renault has announced an expansion to its electric van range with the launch of the Renault Zoe Van. The new compact model has been for sale in Europe for a couple of years already, but with a rise in popularity for electric vans, Renault feels that now is the time to launch it in the UK. Prices start from £25,180, including the Government’s £8,000 Plug-in Van Grant.

The Zoe Van is identical to the supermini in every way, save for the fact the rear door glass has opaque film added to it, while the back seats, seatbelts, electric window mechanisms and parcel shelf have been removed and replaced by a large, flat load floor and steel mesh bulkhead. The Zoe Van has a cargo volume of one cubic metre and a payload of up to 387kg, while the side doors still open, which boosts versatility.

Under the skin, the Zoe Van has the same running gear as the latest Zoe R110 supermini. That means it has a 52kWh battery and a 107bhp electric motor (the more powerful R135 motor isn’t currently available), and means the Renault Zoe Van has a range of up to 245 miles.

Charging the Zoe Van takes nine hours and 25 minutes via a 7kW wallbox, or three hours from a 22kW supply. Renault’s Chameleon charger is fitted as standard, which means the Zoe Van can also be charged from a high-voltage 50kW DC rapid charger in 70 minutes (0-80 per cent capacity). Like the Zoe supermini, the charging port is located in the nose, behind the Renault badge.

Two trims are on offer in the Renault Zoe Van range: Business and Business+, and both are well equipped. All vans get a seven-inch infotainment display with Apple CarPlay and Android Auto smartphone connectivity, plus 10-inch digital dials, plus air conditioning, electric front windows (the rears are disabled), keyless entry, auto LED headlights and twin airbags. Go for Business+, and while the range drops slightly to 239 miles and payload is 368kg, you get extra kit, with sat-nav, 16-inch alloys, rear parking sensors and a camera, climate control and a suite of safety kit, including auto main beam lights, road sign recognition and lane assist. Options include metallic paint, a Winter Pack with heated seats, and a 9.3-inch touchscreen is available for Business+ trim.

The Renault Zoe Van is on sale now, and comes with a five-year, 100,000 mile warranty, while the battery is covered by Renault’s eight-year/100,000-mile cover.

2022 Ford Maverick Caught In The Bare Metal, Revealing Its Design

Which Convertibles Have Power-Folding Hardtops?

BMW iX Production Start Pushed Back By Months To March 2022