The BMW X1 is already an accomplished SUV, does hybrid power add to its appeal? 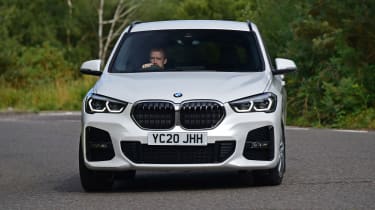 The plug-in hybrid system of this xDrive25e not only delivers the strongest performance of the X1 range, but also the best refinement, while maintaining decent ride and handling and (almost) all of the standard car’s practicality. But as ever, a PHEV remains a brilliant solution for a limited number of users; while Benefit-in-Kind savings make this the clear pick of the range for company car drivers, almost anyone else would be better off with the cheaper petrol or diesel versions.

SUVs don’t exactly paint themselves in a flattering light when it comes to championing environmental causes, but with this X1 xDrive25e, BMW might just have produced one of the most fuel-efficient options available today.

Thanks to a plug-in hybrid powertrain, Munich’s answer for the Volvo XC40 Recharge T5 will drive for 32 miles (according to official testing) on battery power alone, offering up the potential for many buyers’ typical commutes to be driven with barely a drop of petrol used.

Along with its coupe-esque X2 cousin, it’s the smallest of the BMW SUV family. A footprint smaller than a 3 Series saloon makes it a doddle to drive around town, yet there’s still a lofty seating position that gives a great view of the road ahead.

So far, so good, and the remaining technical specs promise much, too. The PHEV system consists of an electric motor which produces 94bhp and 165Nm of torque, but when a little extra shove is needed, a three-cylinder, 1.5-litre petrol engine chips in with an additional 123bhp and 220Nm.

Prod the starter button and the 25e stays silent; in its default Auto eDrive setting, the petrol motor will only perk up if you ask for hard acceleration or if the battery charge is low. Once you’ve overcome a slightly sluggish response when initially moving off, the electric side of the hybrid system feels smooth and gives plenty of performance for everyday driving. It can reach 84mph in zero-emissions mode if necessary, although during our time with the X1, a full charge of the battery offered closer to 25 miles of range rather than the official 32 miles. 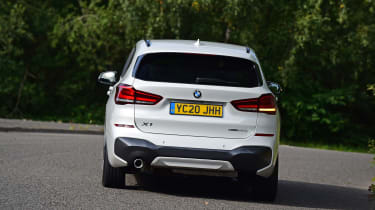 Along with Auto eDrive, the X1 gets two more hybrid-specific driving modes to help drivers to make the most efficient use of the powertrain. MAX eDrive forces the car into full EV mode – perfect when driving in low-emission zones – while Save Battery turns on the petrol unit to maintain the battery’s charge for later on in the journey.

Whichever you choose, the integration of petrol and electric is very slick. When the petrol unit springs into life, it remains hushed within the cabin; a little extra vibration and the rev counter needle are the main clues that both power sources are now in use.

And in this mode, performance is strong. With petrol power sent exclusively to the front and the electric motor driving the rear, the X1 PHEV sets itself apart from the Volvo XC40 by offering four-wheel drive. With both elements of the powertrain in action, the X1 can sprint to 62mph from rest in 6.9 seconds – a figure that doesn’t just undercut any of the existing petrol or diesel options in the range, but is also 0.4 seconds quicker than the Volvo.

It’s more fun to drive than the XC40, too. While that 10kWh lithium-ion battery is hefty, its position beneath the rear seats helps to keep the centre of mass low and weight distribution nicely balanced from front to rear. As a result, the X1 remains stable and composed through the corners, and resists body roll well. The steering does it plenty of favours, too; while there’s not a huge amount of feedback, the weighting and response are spot on.

It can’t fully hide that extra weight, though. Compared with the lighter petrol models, the hybrid’s limits of grip are reached earlier, at which point understeer gently sets in. Some larger bumps, the X1 can crash a little bit more too, though on the 18-inch wheels of our test car, the ride, though firm, was perfectly comfortable, and suspension noises are well insulated from the occupants.

Those passengers sit within a cabin whose layout is starting to look a little bit dated, but which still tops its class for tech. The infotainment system is brilliant, with clear graphics, quick loading times and – whether you prefer to tap the touchscreen, use the voice control or twirl BMW’s physical click wheel – a range of input methods that are each at least as slick and as easy to use as in any rival. 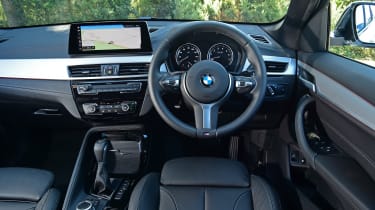 Accommodating the electrified drivetrain has both chipped away at the fuel-tank capacity (now 36 litres) and boot volume; the official 450-litre capacity is 55 litres down on non-hybrid X1s, but the large door opening, and underfloor cable storage mean that it’s perfectly adequate. Rear-passenger space matches the rest of the range – so in other words, it’s class leading.

Predictably, with the xDrive25e being both the most powerful and technically complex model in the X1 range, it’s also the most expensive. Available in all but the entry-level SE trim, prices for the PHEV start from £38,200 in Sport spec and, before options, ends at £40,000 for the M Sport version driven here. That pitches it at around two grand more than the petrol-only xDrive20i, and £1,125 more than the punchiest diesel, the xDrive20d.

And that means that, for many private buyers, it’s going to be hard to justify financially. Yes, it’s quicker and more refined than petrol and diesel X1s, but neither is exactly poor in those areas. Given that the plug-in hybrids are most cost effective on short journeys, it’ll take owners ages to make up the extra initial outlay through fuel savings, if it’s ever achieved at all. So this X1, as with other PHEVs, will likely only make sense for a select group of drivers.

But it will be brilliant for those it does suit. Take company car drivers. While the diesel X1 sits in the 33 per cent Benefit-in-Kind bracket and the petrol 37 per cent, the 25e falls into the 10 per cent class. That means that someone in the 40 per cent income-tax bracket choosing the plug-in model (and forwarding a £3,000 capital contribution) could save roughly £3,000 per year over the petrol alternative. So for those who are searching for their car through work – and have easy access to home charging – it’s well worth a look.

BYD Delivers 246 eBuses To Keolis In The Netherlands