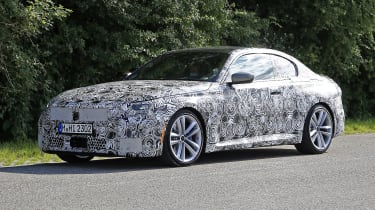 Our spy photographers have snapped the next-generation BMW 2 Series Coupe during its development programme. The German firm’s latest compact sports car will make its debut next year – and it’ll be aimed squarely at the driving enthusiast, as it’ll have rear-wheel drive, a manual gearbox and a straight-six petrol engine.

The arrival of the new coupe means the 2 Series model range will continue to be the most diverse in BMW’s line-up. It’ll sit alongside the four-door 2 Series Gran Coupe and the firm’s duo of 2 Series-badged MPVs – the Active Tourer and seven-seat Gran Tourer. However, under the skin, the coupe will share almost nothing with those cars.

These spy shots reveal little about the new 2 Series Coupe’s design details – the mule in these images is still wearing heavy camouflage. However, it’s clear that the car’s proportions will alter slightly over its predecessor, with this next-generation model getting a longer bonnet, more sharply sloping shoulder lines and more angular bodywork.

Our exclusive images (influenced by in-depth design leaks of the newcomer) provide a better indication of how the finished 2 Series Coupe will look, while highlighting some of the unique styling features BMW will introduce on the model in an effort to distance it from the rest of the 2 Series range.

So, the front end won’t mimic the larger 4 Series Coupe, but it isn’t a copy of the 2 Series Gran Coupe, either. Instead, it’ll have a fresh pair of headlamps and an aggressive front bumper design which appears to be influenced by the X2 SUV. The tail-lights and rear end are also completely unique to the coupe, too.

BMW’s project manager for the 2 Series Gran Coupe, Gernot Stuhl, recently confirmed to Auto Express that the company was planning to introduce a new, compact 2 Series Coupe that will shun both front-wheel-drive and downsizing trends in an effort to make a proper driver’s car.

He said: “There will be a successor that will be on a rear-wheel-drive platform. So customers who want and need a new 2 Series Coupe will find that in our line-up, as well as those who want a six-cylinder engine.” 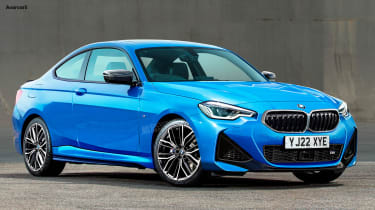 While the Gran Coupe uses BMW’s front-wheel-drive UKL platform – which is shared with the MINI hatchback – the rear-driven Coupe will be based on a heavily modified version of BMW’s CLAR architecture, which is found under the latest 3 Series saloon, and the recently revealed 4 Series Coupe.

However, the 2 Series Coupe’s engine line-up will be familiar to BMW owners. Entry-level models will likely be offered with the same turbocharged 1.5-litre three-cylinder petrol unit as the 2 Series Gran Coupe – while higher-specced variants could have either a 2.0-litre four-cylinder petrol or diesel engine, which will be lifted from the 320i and 320d respectively.

BMW could easily make an M235i variant, too, which will act as a go-between for the standard model and the flagship M2 Coupe. It’ll likely feature the same 302bhp turbocharged 2.0-litre four-cylinder petrol engine as the existing M235i Gran Coupe.

Six-cylinder power will be kept in reserve for the range-topping M2 Coupe. We expect it’ll be powered by a detuned version of the twin-turbocharged 3.0-litre straight-six found under the bonnet of the X3 M and X4 M SUVs – an engine which will also be used in the upcoming M3 and M4 models.

Like the rest of BMW’s M-powered line-up, the new M2 Coupe will be available in standard and Competition variants on the continent, although BMW will only offer the more potent version to UK buyers.

Power will probably be capped at around 420bhp, which will be sufficient enough to keep the M2 competitive with the Mercedes-AMG A 45 and upcoming Audi RS 3, while providing enough distance between it’s bigger brothers – the M3 and M4. Most importantly, buyers should also have the option of a six-speed manual gearbox.

While the coupe is in development, it’s unlikely that a new 2 Series Convertible will follow. Sales of small premium drop-tops are low, and Audi won’t introduce an A3 Cabriolet, while Mercedes is to phase out the two-seat SLC in the coming months.

When the new 2 Series goes on sale next year, prices should start from around £30,000 for the three-cylinder 218i.

What does the new BMW M2 Coupe have to beat? These are the best performance cars on sale now…