We first spotted the redesigned Audi E-Tron Sportback last October. The crossover had camouflage covering the fascias, hiding the new styling. It won’t be a radical change. That will arrive a few years from now. Instead, a mid-cycle facelift and a rumored name change will keep the all-electric crossover feeling fresh as an onslaught of competitors begins to arrive. A new batch of spy shots has captured the restyled model cold-weather testing.

The E-Tron, allegedly being renamed to the Q8 E-Tron to better position it in Audi’s expanding lineup of electric vehicles, wears the same camouflage coverings as the previous test vehicle. However, this one is a tad different. The chrome trim around the greenhouse and the chrome roof rails are a stark contrast to the other test vehicle’s black trim. The current E-Tron offers similar trim differences, which look to be carrying over to the redesigned model. 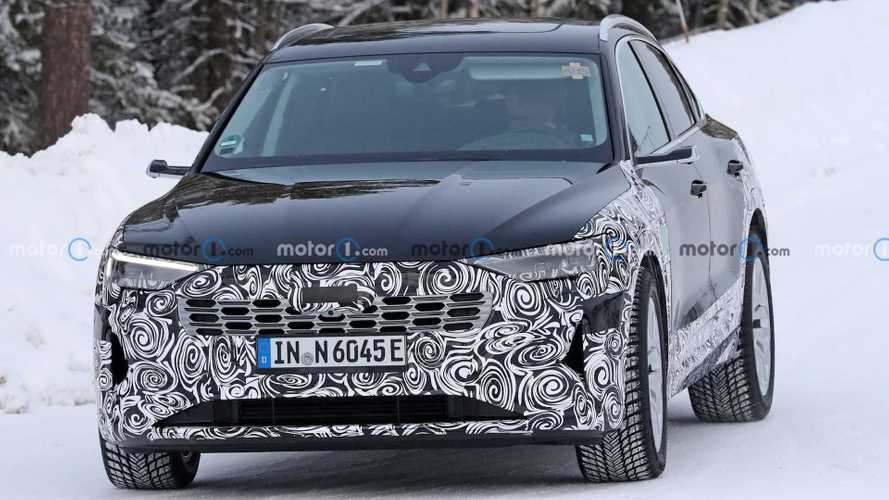 The crossover’s overall design isn’t expected to change much. Instead, we expect Audi to shrink the grille, reshape the bumpers, and tidy up the front and rear lighting elements. Customers shouldn’t expect to see any interior changes. Bigger changes are rumored to be happening underneath the sheet metal, with Audi allegedly giving the model more efficient electric motors and upgraded batteries. Both should help extend its range and improve its performance.

One thing the spy photos haven’t revealed yet is the crossover’s name. Audi announced last year that it would launch the Q8 E-Tron in 2026, and it said that the model would replace the E-Tron crossover. That jives, but Audi is also set to reveal the Q6 E-Tron in 2022, so preemptively renaming the E-Tron to the Q8 now makes sense for continuity purposes. We expect Audi to reveal the refreshed E-Tron and E-Tron Sportback later this year for 2023.