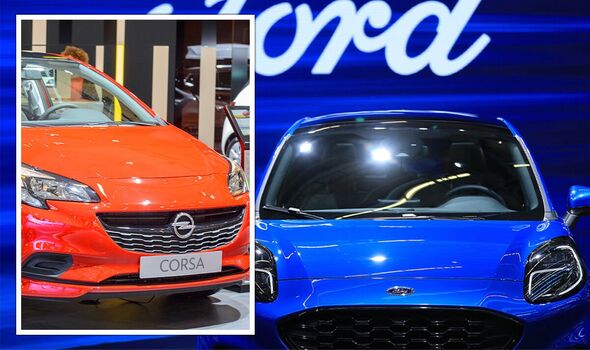 The variety of favoured cars this year appear to appeal to all kinds of drivers; from stay-at-home parents who use their car for school runs and trips to the supermarket, to driving professionals who rely on their vehicle for work purposes.

“We’re able to look at vehicle sales from 2022 and predict what we feel may be the most popular vehicles in 2023.

“This is a great opportunity for anybody who’s in the market for a new vehicle, or even just those with an interest in motors and trends.”

Although reports show that the UK new car market was down 10.7 percent with 118,203 fewer cars sold in September 2022 in comparison to 2021, a whopping 1.6 million new car registrations were still predicted to have taken place by the end of the year.

The top five most popular new cars of 2022

Nissan Qashqai – This mid-size SUV grabbed the top spot with 33,562 vehicles sold this year. Smooth and sleek both outside and inside, the Nissan Qashqai is often regarded as a good compact family car, with adequate interior and boot space.

Vauxhall Corsa – Usually in the top spot, the Vauxhall Corsa was sold 32,126 times in 2022, making it the second most popular new car purchased in the UK. This well-equipped vehicle is described as a fantastic all-rounder, making it perfect for fussy families as well as suave solo-drivers.

Ford Puma – Cousin of the highly successful Ford Fiesta, the Ford Puma had 30,898 vehicles sold as of November. Unlike the Fiesta, which has seen a multitude of supply problems, the Puma has continued to climb the ranks, moving from the eighth most popular car in 2021 to the third most popular in 2022.

Kia Sportage – Another vehicle that has proven very popular with British families, the Kia Sportage flaunts the latest on-board technology, plenty of room in the cabin, and a variety of safety systems including Highway Driving Assist (HDA). At fourth place, this SUV sold 26,393 as of November.

MINI – This iconic car has won the hearts of many UK drivers this year, having sold 25,756 vehicles. The expected power, performance, and control continue to delight, and the addition of the all-electric model has played a part in the high sales figures.

It has been another fantastic year for the used car market. As of September 2022, there were 5.3 million used cars sold, and it is forecast to double in value over the next five years.

Models most popular as of 2022’s third quarter include the MINI, Volkswagen Golf, and Audi A3. The top five used cars of 2022 were…

Ford Fiesta – In first place is the Ford Fiesta with a total figure of 220,172 cars sold. The vehicle proves extremely popular among drivers because it’s great value for money; cheap to buy used, cheap to run. We’re not surprised it’s come on top every quarter.

Volkswagen Golf – As of the third quarter of 2022, there had been 166,642 used Volkswagen Golf cars sold. This could be because it’s one of Britain’s best-known cars, as well as its desirable combination of efficiency, comfort, and practicality.

Ford Focus – Coming in fourth place is the iconic Ford Focus, a vehicle many used car buyers love due to its smart interior, many safety features, and the various styles available. 164,719 transactions were made this year – down from 199,060 in Q3 of 2021, but still a solid figure of purchases.

Vauxhall Astra – Another win for the Vauxhall brand! In fifth place is the Vauxhall Astra, with used cars of this kind racking up a sales figure of 127,125 in 2022. Used car buyers are often looking for something that’s cheap in price but reliable in quality, and this particular vehicle continues to be exactly that, year on year.

Using the data from 2022, experts expect many of 2022’s new and used car favourites to continue dominating the leaderboards in 2023.

According to SMMT’s data, the Vauxhall Corsa, for example, has remained in the top five of total used car transactions since 2017.

A classic, British favourite that offers so many benefits (even previously used); ‘Vauxhall Corsa for sale used’ continues to receive an average of 1,000 Google searches per month, which has increased by 30 percent in the last three months.

In a similar way, ‘Volkswagen Golf used for sale’ gets 750 hits per month, which has increased by 39 percent in the last three months, and 108 percent since November 2021.

Experts also predict the Kia Sportage will continue to climb in the ranks in 2023, receiving an average monthly search volume of 350 for ‘Kia Sportage buy’, which has increased by 86 percent since last year.

Over the last three months, there has been a drop in searches (19 percent) for ‘Vauxhall Corsa new’, which could suggest this vehicle may drop down slightly in the new year’s leaderboard.

Elon Musk Offloads $5 Billion Worth Of Stock, Will He Sell More?