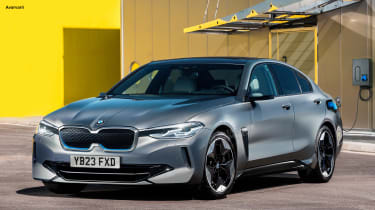 The next-generation BMW 5 Series will be available with the option of a fully electric powertrain, and will be on sale by 2023.

It means that the brand’s prime executive saloon will rival the forthcoming Mercedes EQE saloon – an all-electric sibling for the E-Class – and the Tesla Model S.

The new model will follow the BMW iX3, i4 and iNEXT SUV, all of which are due to be launched before the end of 2021. And like those cars, the electric 5 Series is likely to carry an ‘i’ prefix – BMW i5 – to set it apart from the petrol, diesel and plug-in hybrid models that will continue in the next generation.

It’s unknown whether BMW will look to offer the pure-electric version of the car in both saloon and Touring estate bodystyles. However, judging from upcoming electric versions of core BMW models, such as the iX3 and the i4, it seems safe to assume any i5 version of the 5 Series will feature several unique design changes to the exterior that will set it out as an all-electric model, as previewed by our exclusive image.

Although major details of the new model are some way off being confirmed – BMW has only just facelifted the existing 5 Series – we can draw several likely conclusions about it from both the current model and the brand’s imminent electric releases.

The existing and recently revised G30 5 Series is based on BMW’s modular CLAR technology, which makes use of high-strength steels and lightweight composites in its construction. The next-generation model is likely to use an updated version of this platform, and given that the iX3 SUV makes use of similar underpinnings, the EV tech is likely to be carried over, too.

The iX3 is the first BMW to make use of the firm’s fifth-generation electric drivetrain. In the X3-based zero-emission SUV, this consists of a rear-mounted 282bhp electric motor mated to an 80kWh battery – good for a range of 285 miles. The new electric 5 Series is likely to boast similar stats.

The confirmation of the all-electric 5 Series comes as BMW aims to slash the average CO2 emissions across its range of new cars. In total, 25 new electrified models will be launched throughout the BMW Group by 2023, with roughly half of those ditching any form of internal combustion engine altogether. Where regular engines do continue, 48-volt mild-hybrid tech will be employed to help further improve fuel efficiency.

Although BMW has promised that total of new models by 2023, the lifecycle of the current 5 Series means that the new i5 is likely to be released towards the very end of that period. BMW has also confirmed that other models in the marque’s core line-up will receive pure-electric variants. This includes the X1 SUV and the 7 Series limousine, with electric power featuring alongside the next-generation combustion-engine and plug-in hybrid options.

What will the new BMW i5 have to beat? These are the best electric cars on sale right now…

Aurora CEO Impressed With Tesla FSD, But Says Aurora Is Way Ahead