Toyota has finally released the Yaris’s engine specs, along with a few extra details on the supermini’s equipment specification 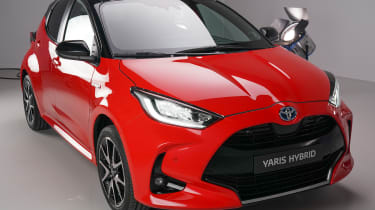 Toyota has released a few extra details on the new Yaris’s powertrain, as well as some additional information on the car’s equipment levels. The fourth-generation supermini will go on sale in the UK later this summer, offering fresh competition for the Ford Fiesta and Vauxhall Corsa.

The new Toyota Yaris is powered by a 1.5-litre three-cylinder Atkinson-cycle petrol engine, which shares the same bore and stroke as the 2.0-litre four-cylinder unit used in the Corolla. It sends power to the front wheels via an updated version of Toyota’s e-CVT transmission that’s been recalibrated to minimise the “rubber-band” rev rises of earlier systems.

The petrol engine is supported by a self-charging hybrid system, which comprises an electric motor mounted in the transmission, a starter-generator mounted on the engine and a lightweight lithium-ion battery pack. Toyota says the Yaris’s powertrain produces a combined output of 114bhp  – enough for a 0–62mph time of 9.7 seconds.

Toyota also claims that the Yaris’s hybrid powertrain will return fuel economy figures of up 76.3mpg and an emissions rating as low as 85g/km on the WLTP cycle. What’s more, the new Yaris can also travel at speeds of up to 81mph on electric power alone.

Perhaps more importantly, the Yaris’s new lithium-ion battery can drain and recharge more quickly than the old nickel-hydride unit – so Toyota says it expects the car to be capable of providing more of an electric surge through its 79bhp electric motor, and completing 80 per cent of urban journeys purely on electric power. 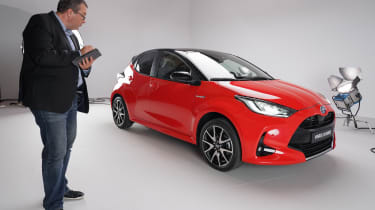 UK customers will also be able to spec their Yaris with a 1.5-litre non-hybrid petrol motor, paired to either a six-speed manual gearbox or a CVT – and final specifications for this engine will be released shortly. A less powerful 1.0-litre three-cylinder petrol should follow a few months after launch, equipped with a five-speed manual transmission only.

The new Toyota Yaris is based on a completely new platform to its predecessor, switching  to a newly adapted version of the same Toyota New Generation Architecture that underpins the latest Corolla, RAV4 and C-HR.

Called GA-B, the new Yaris’s chassis gets extra strengthening around its engine bay and a strut brace bonded to the bottom of the base of the windscreen, in a bid to improve the steering response. The rack itself is quicker, and the car’s electric power steering has a more powerful pump.

The car’s front MacPherson struts are now more in line with the springs, reducing friction. And at the rear, there’s a stiffer torsion beam than before. These tweaks, in conjunction with a bodyshell is considerably more rigid, have allowed Toyota’s chassis engineers to soften the springs in a bid to improve the ride, particularly on pock-marked urban roads.

The new Yaris also bucks the usual trend by being slightly shorter than the old model, measuring 3,940mm long. What’s more, the GA-B chassis offers scope for shorter overhangs, so the new car’s wheelbase is actually 50mm longer than the outgoing car’s. There’s also a taller and wider Yaris-based SUV variant on the way which will sit under the C-HR. The new baby SUV will be likely pitched against the SUV-inspired Fiesta Active.

Inside, the Yaris brings a number of big-car features to the supermini class, including an optional full-colour 10-inch head-up display and centre airbags mounted on the inner edges of the front seats (a world first). There’s a eight-inch central touchscreen, too, which will feature Android and Apple integration as standard – plus a further TFT information display between the two instrument dials. 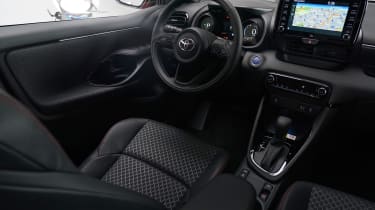 Toyota has also tweaked the hatchback’s seating layout. You sit lower in this new Yaris – the “hip point” of the driver’s seat is 36mm lower than the previous car’s – and there’s a strong mix of soft-touch materials and durable plastics in the front cabin.

The Yaris’s rear packaging is more geared towards children, though – six-footers are likely to find headroom particularly restrictive. Equally, Toyota has yet to name a boot capacity but even with the moveable floor in its lowest setting, it looks shy of the loadspace offered by Renault’s latest Clio.

What do you make of the new Toyota Yaris? Let us know in the comments section below…