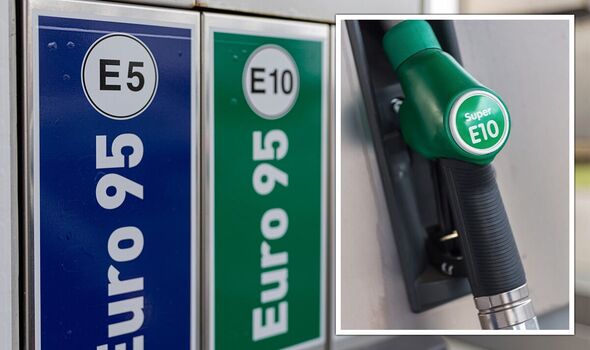 Motorists have been told that they can protect their cars from E10 damage by following “sensible” winter precautions. The warning especially applies to classic car owners as their vehicles are the most likely to be incompatible with the fuel compound.

Gary Wilson, head of the Historic and Classic Vehicle Alliance (HCVA), previously told Express.co.uk that he had yet to get any negative feedback on the new petrol compound.

However, he has urged classic car owners to take precautions with the fuel when storing their vehicles by instead topping up with an older petrol.

He said cars “will be fine” if drivers just started using Super Unleaded ahead of the winter months.

He has urged drivers to fill their tanks until they are full as this will provide little chance for condensation to build up, something which can lead to corrosion.

Mr Wilson said: “We stood talking to members of the public at the NEC show and haven’t really had any negative feedback.

“The majority of folks have said exactly what I’ve done with my BMW Z3.

“I’m running it on E10 and then this weekend I’m going to pump the tyres up to 60psi and fill it with Super Unleaded.

“Then I’ll drive around the block, reverse it into the garage, take the tanks off it and leave it until the spring.

“It’s then got Super Unleaded E5 through the system and it will be fine.

“The fuel tanks will be full so there is not a lot of opportunity for condensation in there.

“I’m not hearing any huge nervousness, we are not getting huge amounts of negative feedback at all.

“In fact, most people are just saying they will be sensible with what they do.”

They warned ethanol can “absorb corrosive water in the fuel tank” which could “damage a car that is not used for a long period of time”.

However, other motoring experts have warned drivers should never completely top up a classic car before storing a vehicle for winter.

Nigel Elliott, fuel specialist at the Federation of British Historic Vehicle Clubs (FBHVC), said it was “handy to leave a bit of space in the tank”.

He previously said: “The danger is on a completely full tank, when you come to start the vehicle you’ve lost some of the lighter ends of the fuel.

“They have evaporated and you will have some trouble getting the vehicle going.

“It’s always handy to leave a bit of space in the tank so you can splash in a bit of new fuel to increase the volatility.”

Guy Lachlan, MD of Classic Oils, has previously said drivers should make sure they don’t give ethanol a chance to absorb any water.

This can be achieved by filling the tank fully, sealing it or fully draining it before storing it for winter.

These Are The Four EVs Mercedes Is Bringing To The U.S. By 2022