Shown earlier this year in prototype form, one of the models will be a small, two-door EV aimed at car-sharing, offering a relatively modest footprint and range. Dubbed Duo, the futuristic model was previewed by the EZ1 prototype, showcasing a body 50% of which will be made from recyclable materials.

“Designed and conceived specifically for shared use, it is representative of the brand’s design approach: the service and the global experience at the heart of vehicle’s design,” Mobilize says.

Another one of the planned models will be a cargo version of Duo named Bento, featuring seating for just one person and a trunk with a capacity of 35.3 cubic feet. Yet another cargo-aimed model will be called Hippo, offering a 441-lb payload capacity in addition to 106 cubic feet of space. 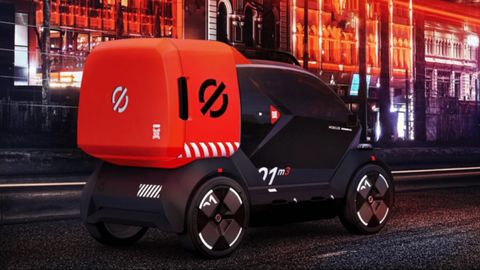 What might seem surprising is, none of these will actually be offered for private purchase, with Mobilize instead seeking to rent the vehicles out for short-term use—or rather what used to be called rental but has now been rebranded in to “mobility” by more than a few automakers attempting to anticipate future usage schemes.

“With a unique combination of hardware and software, purpose-designed vehicles and services in open ecosystems, Mobilize offers flexible mobility solutions for people and goods, adapted to the evolving expectations of customers, companies and cities,” the company promises. “It addresses concrete issues by providing solutions that are complementary to the traditional scheme of buying a car.”

The company’s approach is not without precedent in the automotive world at the moment, with several automakers having launched ventures aiming to exploit an anticipated arrival of shared mobility, as some refer to it. But this gleaming car-sharing future has only materialized for a handful of operators, including car-sharing pioneer ZipCar. Renault’s efforts with Mobilize appear to mirror the efforts of other automakers to launch car-sharing schemed as an urban alternative to leasing or ownership, with automakers seeking to bypass dealers entirely and offer a pay-per-use model.

What Mobilize has going for it are very futuristic designs reminiscent of the Renault Twizy, but now updated with a Neill Blomkamp aesthetic. That alone might be worth it to some users.

Renault isn’t alone when it comes to the concept and packaging, after all, and can perhaps be said to be following in the footsteps of the similarly-small Citroen Ami, expected to arrive stateside relatively soon.

Will this type of usage scheme take off in the near future or the far future? Let us know in the comments below.

Irish Company Working On Corvette C2 Restomod EV With Up To 2,000 HP