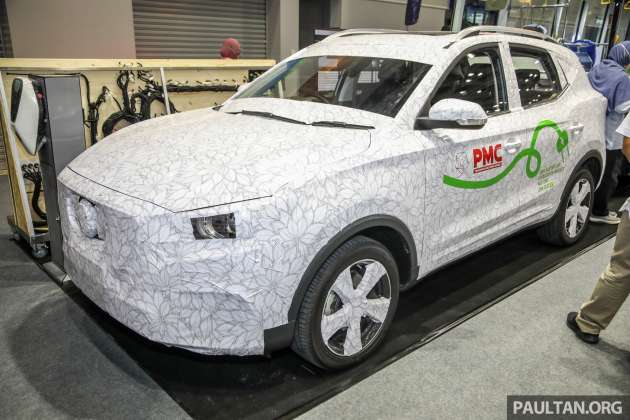 Besides the Great Wall Motors Ora Good Cat, there was another electric vehicle put on display at the Kuala Lumpur Convention Centre in conjunction with the launch of the Bumiputera Development Action 2030 on Monday.

Beneath the camouflage bearing Protech Master Coach (PMC) branding is an MG ZS EV, a model that was previously reported to go on sale in Malaysia in May 2020 via MG Berjaya. However, that didn’t happen, and the public display of the EV at KLCC is not indicative that this will happen anytime soon.

Speaking to a PMC spokesperson at the event, our sister site paultan.org/BM was told that there are currently no plans to fully import (CBU) or rebadge the ZS EV for sale in our market. Instead, the unit you see here has been in the country for some time now now, and in the past two months, has been used for R&D purposes by the company.

The R&D work is not to evaluate the model’s feasibility for Malaysia, but to evaluate and identify components that could be produced by existing industry players here. The spokesperson noted PMC is capable of performing reverse engineering to determine if there are components that a local vendor could manufacture here, which would contribute to strengthening the local supplier ecosystem in relation to EVs.

The company has also collaborated with SIRIM previously on producing electric buses which are claimed to be currently used in Melaka (pictured in the gallery below). With the ZS EV acting as a test bed, it is looking for opportunities to incorporate electrification technologies into mass-market models.

The spokesperson explained the ZS EV was chosen because the model is widely sold in China and the United Kingdom, and has proven to be capable and durable as a mass-market EV. While we won’t be getting the ZS EV here, the electric B-segment SUV has been sold in Thailand since June 2019.