The Mercedes G-Class is a formidable machine even in its most basic configuration. However, the German automaker has more ways than one to turn it into a high-performance menace, and new spy shots reveal one of them – the G-Class 4×4 Squared.

The spy shots leave little to the imagination, with a splash of camouflage covering the wide wheel arches, a portion of the roof, the roof rack with auxiliary lights, and the full-size spare tire rim cover. Everything else is exposed, showing off the G-Class’ familiar boxy styling. The camouflage could not hide the SUV’s raised ride height nor its brutish stance. 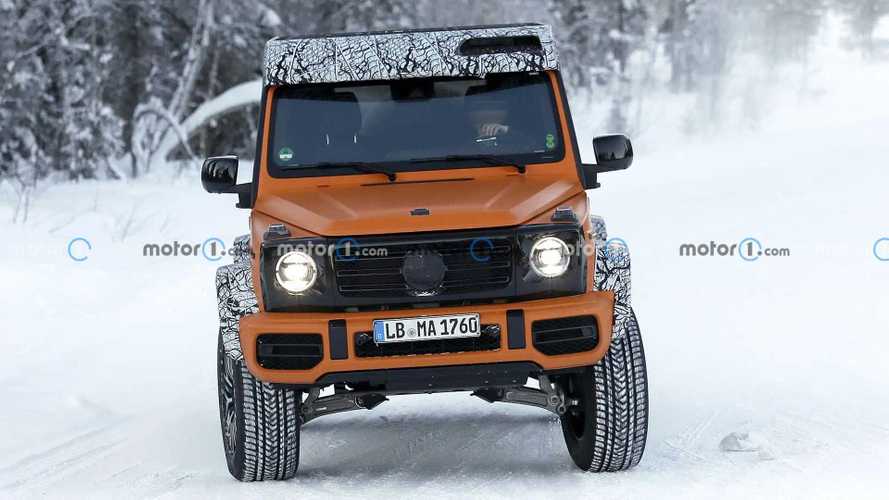 The taller suspension greatly improves its off-road capability, with the previous generation offering 17.7 inches (450 millimeters) of ground clearance and 39.3 inches (1,000 mm) of fording depth. Mercedes used the AMG G63 6×6 as a basis for the original 4×4 Squared, upgrading the G-Class with portal axles, permanent four-wheel drive, locking differentials, and more.

A twin-turbocharged 4.0-liter V8 will provide power; however, specific information about its output remains unknown. It could sit closer to the G550’s 416-horsepower (310-kilowatt) output, or Mercedes might position it closer to the AMG G63 and its 577 hp (430 kW). For reference, the previous 4×4 Squared made 416 hp. Don’t expect the 4×4 Squared makeover to reach the rest of the G-Class lineup.

The new G-Class is selling well, earning a record sales year in 2021 with over 41,000 examples sold. That popularity is allegedly having Mercedes extend delivery times for the model, with some reportedly pushed to as late as the fourth quarter of 2024. The G-Class 4×4 Squared isn’t expected to debut until later this year. It will then go on sale for the 2023 model year, though US customers might have to wait for sales to begin here. New models from Mercedes and other German brands tend to go on sale in Europe first before arriving stateside.

Hydrogen-powered car sales double with buyers offered huge discounts – up to £35,000 off

Bankrupt SsangYong to be sold to Korean EV startup Edison Motors – 'we will overtake Tesla' is the motto – paultan.org