With spring weather flourishing in Germany, Mercedes-Benz is stepping up activity at the Nürburgring. Among the sea of swirl-camouflaged prototypes comes something we haven’t often seen. Rumors say C-Class and E-Class coupes and convertibles will be merged into a new CLE-Class, and this appears to be a hot AMG version, possibly called the CLE 63.

There’s still much we don’t know about this new model lineup. Considering the state of the prototype in these photos, it’s possible Mercedes still doesn’t know much either. Caught on public roads near an AMG test center at the Nürburgring, this prototype is far from production-ready. Janky exhaust tips poke from beneath the rear fascia from rectangular cut-outs that look like they were literally cut. Placeholder taillights are clearly visible, and a wire is hanging from beneath the trunk lid. Actually, looking closer, that could be a string used to open the trunk. Yeah, this is definitely an in-progress prototype. 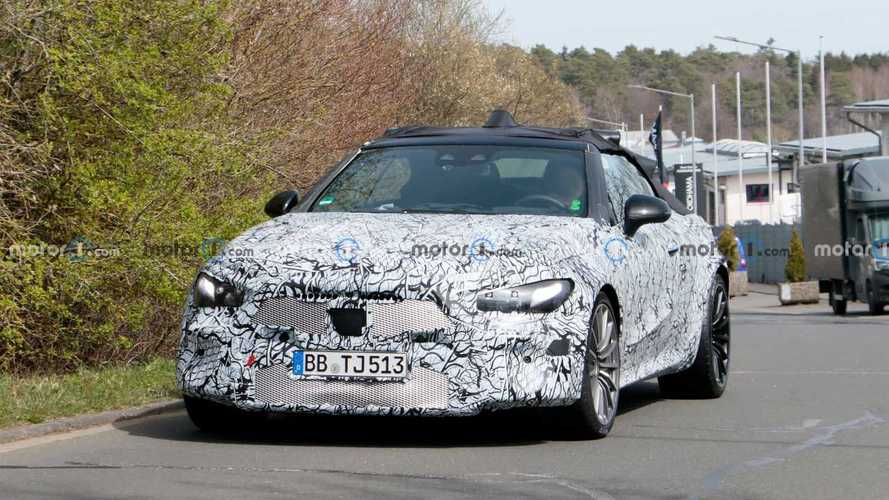 Moving to the front, it’s hard to tell what aspects are production-ready because everything is well concealed by false panels. At the very least, the headlights appear to have sensors on the housings, and we see what could be forward-looking cameras on the corners of the front fascia. Tape covers the A-pillars, heavy coverings hide the fabric roof, and more false panels exaggerate body lines along the sides.

Items that cannot be hidden are the tires, and they are seriously wide. That holds true for the front but it’s the rears that capture our attention. Zooming in, they appear to be 20-inch Michelin Pilot Sport 5s in 285/30 guise. That’s the reason we believe this is an AMG model, and with meats like this on the back, it’s likely a range-topping version. As such, CLE 63 is a natural conclusion, and if it borrows a powertrain from the current C63, it could pack over 500 horsepower.

Will we see a debut in 2022? Things are still early in the program, at least from the standpoint of real-world testing. A better theory has Mercedes debuting the CLE-Class next year as a 2024 model, but this is one instance where we’d love to be wrong.